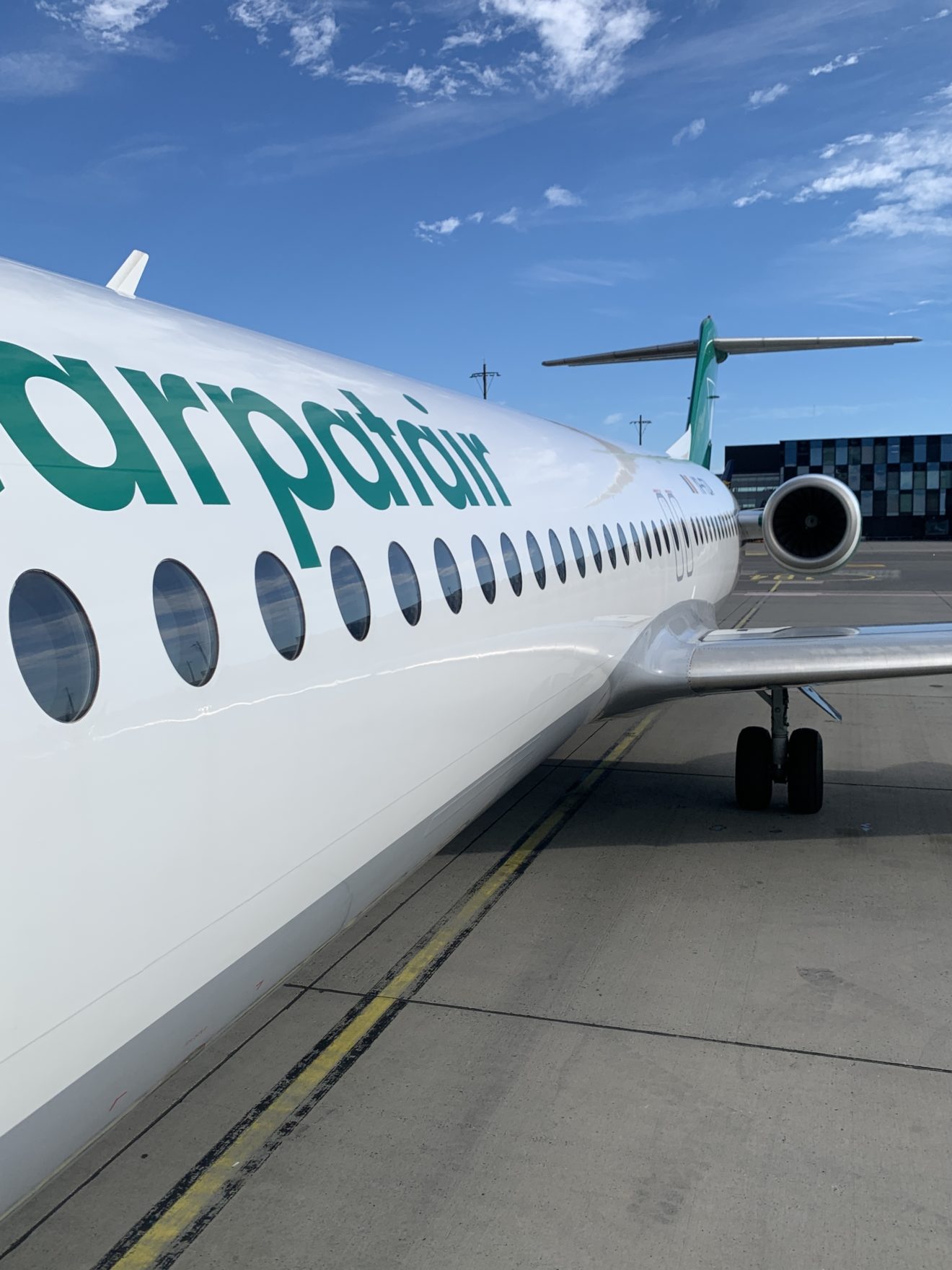 Oslo – As we’ve recently entered the “post-pandemic” state, demand for air travel is at an all-time high this summer, leaving airlines at maximum capacity leading to the lease of other aircraft from other companies.

AirBaltic is one of the airlines in Europe dealing with this issue, hence the lease of aircraft and probably one of the more uncommon and rare aircraft. I’m flying Oslo to Riga on AirBaltic operated by Carpatair’s Fokker 100! This flight is operated by one of two Carpatair Fokker 100s, YR-FZA. Carpatair’s Fokker 100 offers an all-economy cabin with 5 seats across in a 2-3 configuration, similar to AirBaltic’s A220 aircraft

AirBaltic offers check-in 5 days before departure to passengers with reserved seats and 36 hours before departure to passengers without reserved seats. As I reserved a seat for this flight, I was able to check in 5 days prior via the check-in link I received in an email. The process itself was fairly easy and over within a minute. AirBaltic also offers check-in at the airport for a fee, though this fee was an undisclosed amount.

I arrived at Oslo Gardermoen 1,5 hours prior to departure leaving me with around one hour to pass security and enter the international departures hall. Upon entering the airport building, I had my digital boarding pass in hand and could walk straight to the security checkpoint. As this flight was flown in the very last week of summer break, I had no expectations of spending much time queueing in security, which was absolutely an expectation that was met this morning. I made my way through the security checkpoint in less than 5 minutes. If you plan on flying through Oslo in the peak seasons, such as summer break or other popular times for travel, show up at least 2,5 hours or even more before departure! Oslo tends to have a vast amount of security checkpoints open, causing long and intense lines.

Except for the airport being generously warm, walking through the airport is just as nice as ever.

As our aircraft was situated on a remote stand, we’ll be boarding by bus from the so-called “bus gates”. These gates are definitely the least glamorous gates at the airport.

Boarding was announced on the speaker system without any group prioritisation, leaving the boarding process a bit of a clumsy “first come, first serve” experience. We were let onboard one of the brand new airport busses which has a wooden floor and comfortable seats. The 3-minute ride to the airport was nothing special, nor nothing to complain about.

Upon entering the aircraft, I was greeted by two friendly, smiling crew members, one being the service crew from AirBaltic.

Shortly after, I was making my way down the aisle to my seat for this flight, 20F.

Seat 20F was a deliberately chosen seat as it comes with a few perks. A few of these are Two big windows and a breathtaking overview of both the wing and engine.

The seats were thick and incredibly comfortable. The seat pocket contained a safety card, barf bag and an inflight magazine. Upon testing the seat out a bit further, I found out that the tray table was very sturdy even though it was a bit broken in one of the corners. Legroom was also not any issue at all.

Around 10 minutes after departure, the crew announced the start of their inflight services where you could purchase most things listed for sale in the inflight magazine. I decided to not purchase anything on this flight because I already had what I needed. If you’d like to pre-order a meal on your flight with AirBaltic, you can do this by customising your booking.

Arriving in Riga was surprisingly easy. After landing we were brought into the terminal area which I quickly learned acted as both departures, transfers and arrivals hall. This makes Riga (RIX) an incredibly easy airport to transfer and navigate through. The only downside to Riga Airport would have to be the lack of kiosks.

After spending 4 hours at transfers, I decided to explore the airport a bit and was surprised to find more duty-free shops than kiosks and restaurants.

I think it’s safe to say that it’s every avgeeks dream to fly on any retro aircraft. At least it’s mine. The Fokker 100 is an incredibly amazing aircraft and a rare one to fly in the world of modern-day aviation. My initial expectations for this flight were all exceeded. Examples of my expectations are legroom, crew, service and experience. This flight cost me 38.99 EUR including seat reservation and was well worth it for the amazing “retro” aviation experience! I’ll definitely be onboard AirBaltic again one day when the chance bids itself.