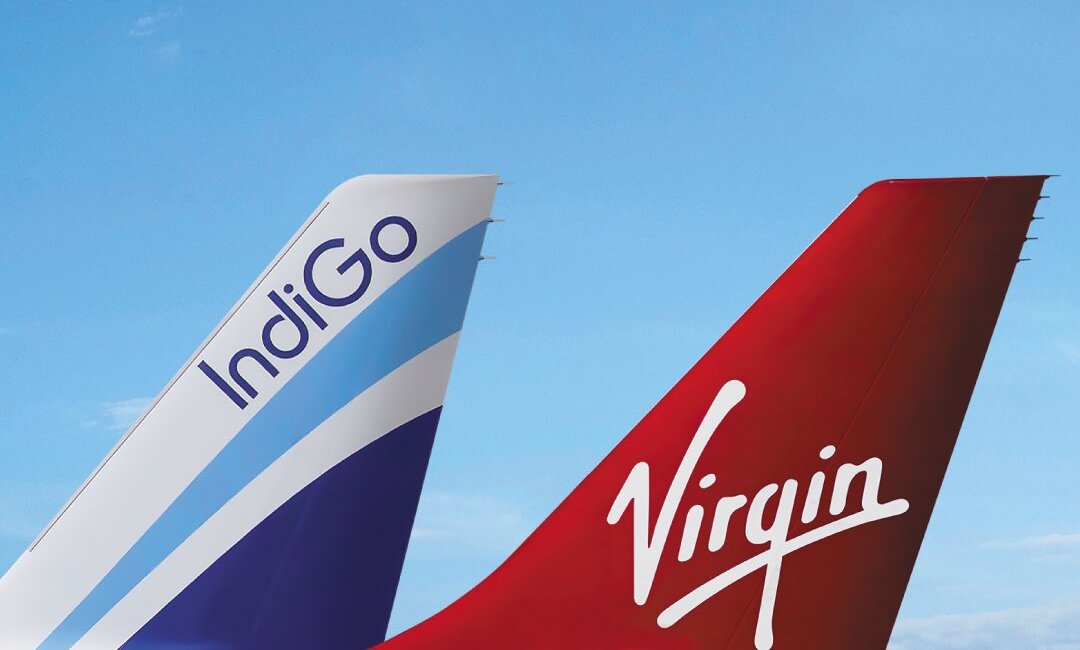 LONDON – On August 31, the British carrier, Virgin Atlantic and the Indian LCC (low-cost carrier), IndiGo, announced the signing of a new codesharing agreement.

Joining a large list of recent codeshares and partnership agreements that IndiGo has been involved with, Virgin Atlantic now adds that party list. The new codeshare arrangement between the two carriers will offer passengers between the UK and India yet more opportunities to travel and explore both countries.

This will mean that any customers that buy a Virgin Atlantic flight ticket, from September 27, will not only be able to fly to Virgin Atlantic’s current Indian routes to Delhi and Mumbai, but now connect to a further seven Indian cities with IndiGo. This seven is only an initial starting point as to which later on this year, the agreement will expand to cover 16 different destinations across India.

The initial seven cities are; Chennai, Bengaluru, Hyderabad, Kolkata, Ahmedabad, Amritsar and Goa from both Delhi and Mumbai. Then later on in the year, the following Indian destinations will be added to bring the total up to 16; Kochi, Chandigarh, Jaipur, Pune, Coimbatore, Nagpur, Vadodara, Indore and Visakhapatnam.

Virgin Atlantic’s current flights to Delhi and Mumbai are served directly from London Heathrow. The Delhi flight VS302 departs London Heathrow Airport (LHR) at 11:05 am and arrives into Delhi Indira Gandhi International Airport (DEL) at 00:40 am after an eight hour flight.

The return flight VS303 departs Delhi Indira Gandhi International Airport (DEL) at 02:30 am and arrives back into London Heathrow Airport (LHR) at 07:50 am after a nine hour flight. All times are local.

Delhi also gets a second daily service from London Heathrow, flight VS300 which leaves Heathrow at 18:35 pm and arrives into Delhi at 08:10 am, whilst the return flight, VS301, departs Delhi at 10:00 am and arrives back into Heathrow at 15:20 pm. All times are local.

The return flight VS355 departs Mumbai Chhatrapati Shivaji International Airport (BOM) at 12:15 pm and arrives back into London Heathrow Airport (LHR) at 17:35 pm after a nine hour flight. All times are local.

All three of Virgin Atlantic’s services to Delhi and Mumbai are served by the carriers Boeing 787-9 Dreamliner fleet, of which they currently have 17 in their fleet.

Commenting on the new codeshare agreement, Virgin Atlantic’s Chief Commercial Officer, Juha Jarvinen, has said, “We’re thrilled to launch a new codeshare partnership with IndiGo. This summer marks our largest ever flying programme from India with three daily direct services to London and our new partnership takes our commitment to even greater heights.”

“IndiGo is India’s largest airline and its extensive network will offer Virgin Atlantic customers even more choice when travelling between the UK and India, as well as offering seamless connections for the onward travel across our extensive US route network.”

It’s great news for our Flying Club too, by providing more opportunities for members to earn valuable points. This new partnership aims to respond to the large, fast-growing demand for visiting friends & relatives, leisure as well as business travellers looking for more choice between UK and India.”

Adding to Jarvinen’s comments, IndiGo’s Wholetime Director and Chief Executive Officer, Ronojoy Dutta, says, “We are please to announce our codeshare with Virgin Atlantic to provide enhanced connectivity to the passengers.”

“This will not only help offer a seamless travel experience from London to as many as 16 destinations in India, but also open up international trade opportunities throughout the country via enhanced accessibility.”

“We look forward to having Virgin Atlantic’s customers on our lean clean flying machine, as we extend our on-time, affordable, courteous and hassle-free travel experience.”

Joining a plethora of new codeshares and partnerships with IndiGo, Virgin Atlantic’s long-haul network from London Heathrow will be a big boost for the Indian aviation sector and passengers flying on both airlines will certainly see a great benefit from this new codeshare agreement.