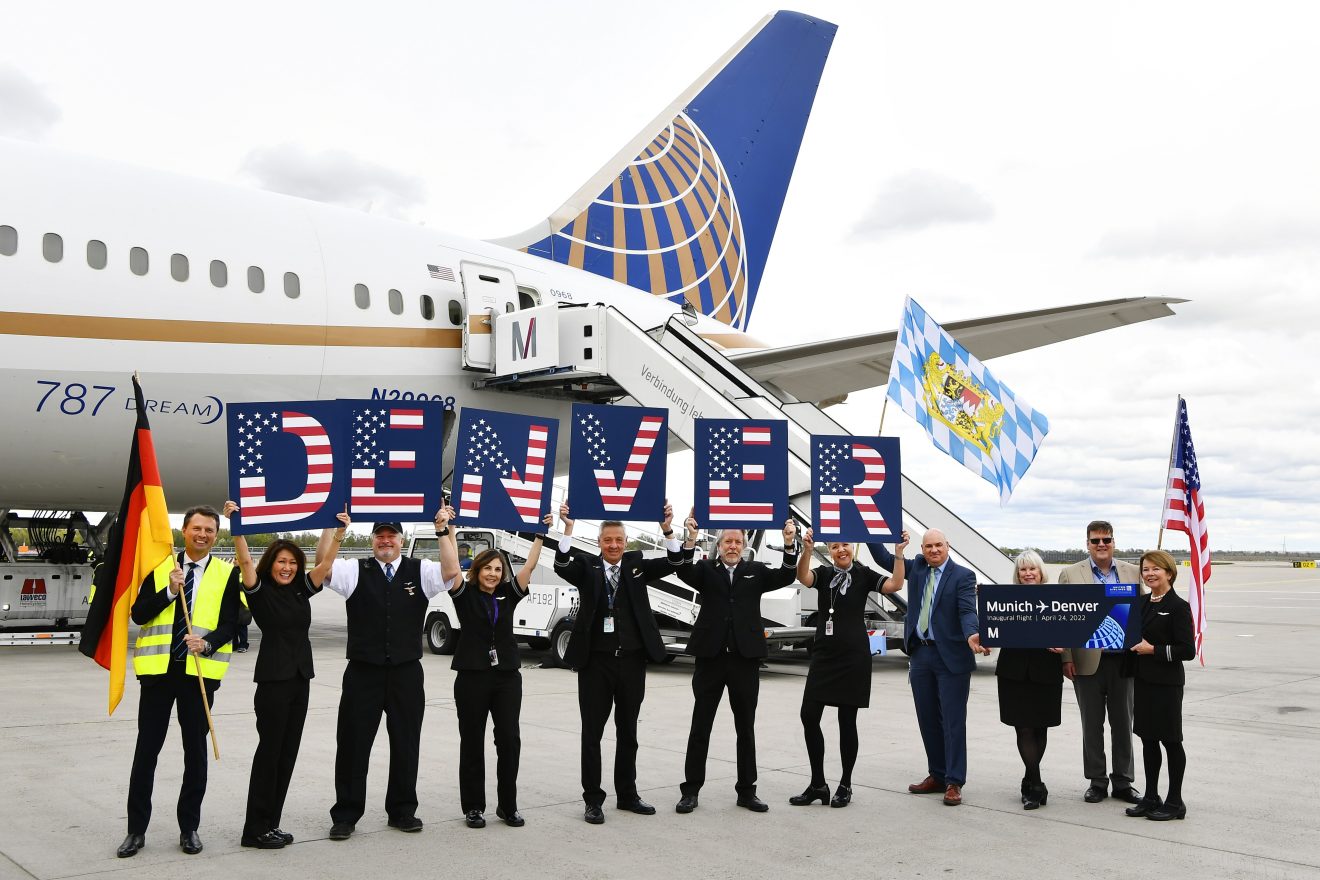 LONDON – United Airlines has expanded with two routes out of Munich Airport, with the restart of its Houston service & the inauguration of its Denver service.

The new Denver service marks the first time that the destination has been served by the German airport.

This new route will be served by the carrier’s Boeing 787-9 Dreamliner aircraft, with the Houston service resuming under the Boeing 767-300.

With these two routes, this brings United’s presence in Munich to six flights per day, with the following routes also being served under that umbrella:

Below, you can see photos of the event, primarily celebrating the Denver inaugural:

Germany Is A Key Market for United…

It is becoming clear that Germany is a key market for United Airlines when it comes to the transatlantic sector.

On top of the Newark flight to Berlin, the airline will also be re-starting their Washington Dulles to Berlin flight from May 6, again this flight will also use United’s Boeing 767 aircraft to operate.

The two new Berlin routes are just a couple of a plethora of new flights that United will be starting in Europe following passenger demand returning to more stable levels now that we are at the tail end of the COVID-19 pandemic.

Not only is Berlin returning to United’s schedule, but this year we’ll also see them return to eight other destinations, namely Dublin in Ireland, Milan and Rome in Italy, Frankfurt and Munich in Germany, Nice in France, Zurich in Switzerland, Tokyo in Japan, and Bangalore in India.

They are also due to start brand-new services to five destinations.

A Busy Transatlantic Summer Ahead…

It is clear that on those grounds, United has a busy transatlantic summer ahead of themselves.

Despite the ongoing issues surrounding pilot shortages in the United States, the airline remains confident enough in launching and restarting new services.

With demand pent-up at a whole new level as a result of the pandemic keeping everyone in their homes, it is routes like this that United will most definitely capitalize on.

At this stage, United seems to be the carrier in the spotlight regarding significant route expansion and reinstation that will no doubt put the rest of the US3 to shame.

Despite current challenges, it will be interesting to see what other routes will be inaugurated and reinstated by United.

As the Summer 2022 season continues onwards, the question that will be posed for United and its competitors is: Is there enough supply to cope with demand?

The answer to this will be gradual and will be seen throughout the Summer, especially if any problems or issues do arise moving forward.

But for now, United can celebrate another major milestone in the German market, and will no doubt continue its expansion plans as the Summer nears.

U.S Pre-Departure Tests Could Be Phased Out in a Couple of Weeks
Airbus Does Not Have To Supply Qatar Airways With A321neo Aircraft, Court Rules
Comment