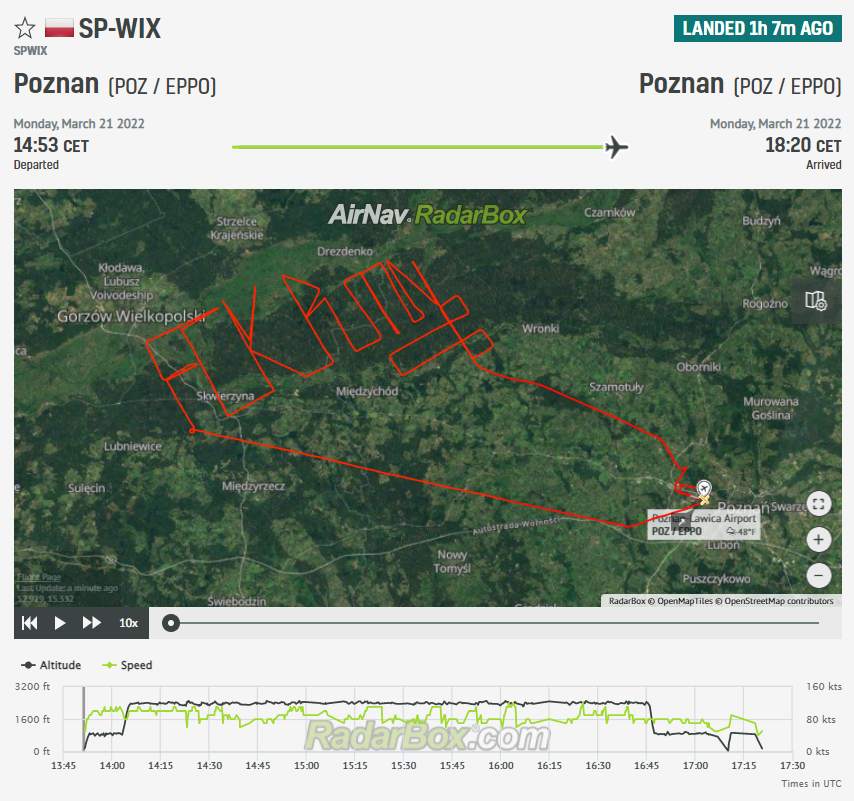 LONDON – A private pilot based in Poland conducted a flight today expressing his hate for Russian President Vladimir Putin during his flight.

SP-WIX, the Tecnam P2002-JF Sierra was the aircraft that conducted a three and a half hour flight in the surrounding area of Poznan Airport.

There’s No Polite Way To Say This…

The pilot in command of SP-WIX, who is not known at this time, spelled out the words “FCK PUTIN” in an expletive-based message about his actions during the invasion of Ukraine.

The aircraft departed Poznan at 1453 local time, spelled it out, and then landed back at the airport at 1820 local time.

Such themes are becoming a regular occurrence within the aviation industry.

Not The First Time This Has Happened…

This is not the first time this has happened of course.

Around 10 days ago, someone manipulated ADS-B data on the Antonov AN-225 Mriya with the fake routing circling the capital of Ukraine, Kyiv, with the callsign “FCKPUTIN”.

It is unclear whether the pilot of SP-WIX was also responsible for this, but it is a very similar theme, to say the least.

The flight-tracking company has since deleted the data.

FlightRadar24 hasn’t provided a comment as of yet regarding the fake data being placed on their website.

It obviously seems that whoever has done this is angry with President Putin because of the invasion of Ukraine as well as the destruction of the aircraft, which was confirmed over a week ago.

And the same applies to the pilot on SP-WIX.

It’s becoming clear that the aviation community’s attitude towards Putin’s invasion of Ukraine is somewhat anti-Russian. And that is not surprising given his actions.

It will be interesting to see whether any other messages of similarity will happen in the air, and if so, what the contents will be.