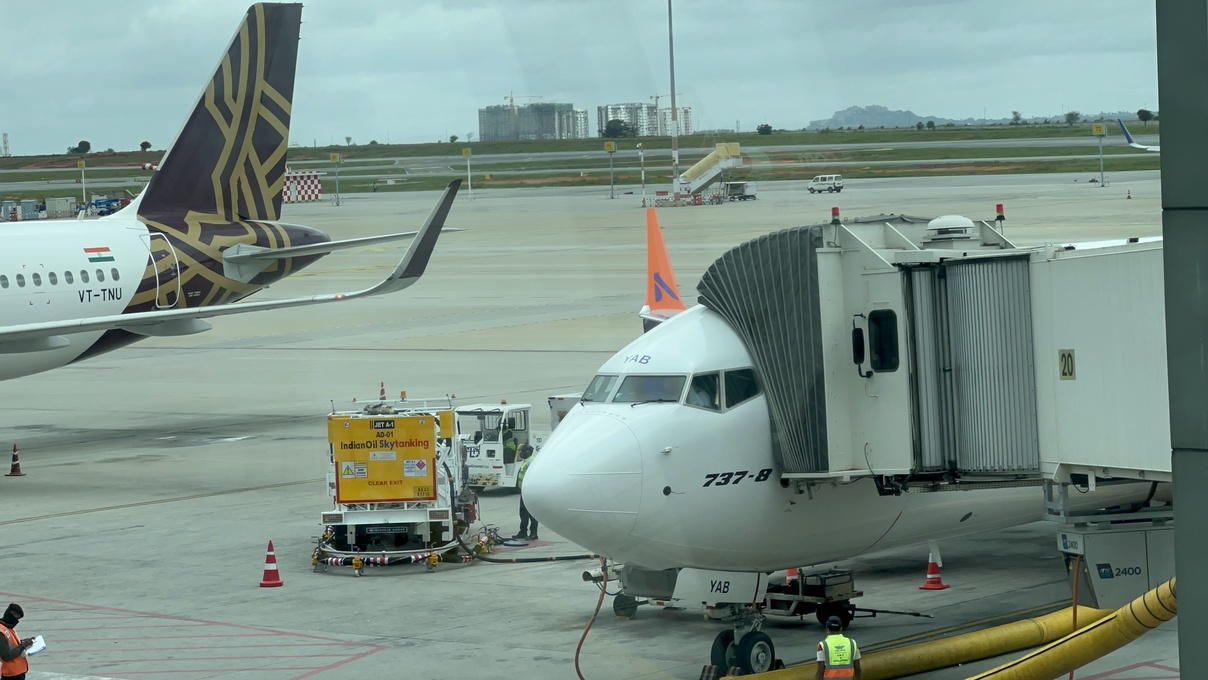 LONDON – After many years the Indian aviation industry is seeing the launch of a new low-cost carrier – Akasa Air. And yes, it was launched by none other than business tycoon Rakesh Jhunjhunwala. Today I flew with Akasa from Bengaluru airport.

Akasa Air was officially introduced to the aviation market – dubbed to be the Ultra Low-Cost carrier of India with the tag line “It’s your Sky”. The marketing team of the airline created a huge buzz for the launch of the airline, such that the first flight from Mumbai – Ahmedabad was sold out within hours of the ticket being put on sale.

I got my ticket on their second launch flight between BLR-COK on 12 August, 2022. Akasa Air has placed an order for 72 Boeing 737 Max 8 aircraft – this order helps Boeing as it is an opportunity for the manufacturer to regain the lost market share in India.  Currently the airline has two 737 MAX 8 aircraft in its fleet.

At the time of booking there seemed to be issues with website, considering the huge traffic I was expecting this kind of issue. I decided the best way to book ticket was through a third-party website and I was able to do it without any hassle there.

Another thing I noticed was unlike other airlines I did not receive any confirmation SMS or email from the airline. Upon entering my PNR on their website it showed “No Booking found with this detail”. I called up the airline customer service and then got it sorted out.

I had purchased a ‘Flexi Fare” which gave me the freedom to select a date change for free, free seat selection and complimentary food & beverage of choice.

After having seen their extensive food menu I wanted to place an order for food, but again the website did not allow you to select and pre-book your food choices either, so I had to again call their customer service to select seat and food.

Photo Credits: All photos in this article are credited to Gaurav Gowda AviationSource.

Bengaluru Airport has only one Terminal (T1), whereas another terminal building is under construction. The existing terminal is one the beautiful terminal buildings in the country, and the airport has enough of check-in counters to make sure passengers have a hassle-free experience. I was almost 4 hours early because I wanted to catch every moment of their launch event.

The counters were all decorated and everyone looked very excited for the event. I was one of the first passengers to arrive, and I met many av-geeks who were there like me just to be a part of the event.

Check-in counters opened quite late, but it was all excused as all of us were socializing with the airline employees. Soon CEO of Akasa Air Vinay Dube arrived and the auspicious “Lighting of Lamp” ceremony took place and after few words from CEO we were all headed towards the Gate.

The security check area is big and has enough staff and counters for a smooth experience but still during any typical busy day it takes around 30 minutes.

After waiting a long for a tray, I put my bag and electronic items on the belt. It took me 32 minutes precisely to complete my security check and enter the airside.

The boarding gate was decorated, and all the officials were present there for the cake cutting ceremony. When the event was completed, we began our boarding our flight.

I was awestruck when I entered the cabin; it was such a fresh look, and the choice of colours was something which I liked the most.

For the first time for any Indian domestic airline, this aircraft has a charging point under every seat, and the seat has an adjustable head rest for comfort.

There is decent amount of leg space, and everything felt fresh and clean. I really fell in love with the wide windows on the Boeing 737 MAX 8 and the winglets.

Soon after take-off, the cabin crew started the meal service. I had pre-ordered three items and wasn’t sure how I would complete the entire meal, given that it was short flight of around 30-35 minutes duration.

The crew tried its best to serve everyone in such short time, but they couldn’t serve everyone at the last moment. For me, I got 1 item which I had pre-ordered and other two times were not available for which the crew apologized and took my contact details so that the airline could process my refund.

Overall, we can say excitement in the air, with many of us on-board being av-geeks, we truly enjoyed this new experience.

We landed at Cochin International Airport on time (as expected), but there was no water cannon salute for the aircraft. Akasa Air wants to be one of the most sustainable airlines in the country. We had a warm welcome by the Airport staff as this was an inaugural flight.

Akasa Air has a huge potential, considering Boeing 737 MAX 8 to be one of the most fuel-efficient aircraft they can really turn the tables around.

IndiGo, which is India’s largest airline, is going to be a tough competitor for Akasa Air. Soon after the launch, IndiGo dropped their airfares to be similar to Akasa’s, or in some cases even lower.

Now, it is to be seen that how this airline will compete against other LCC’s and full service carriers in the country.