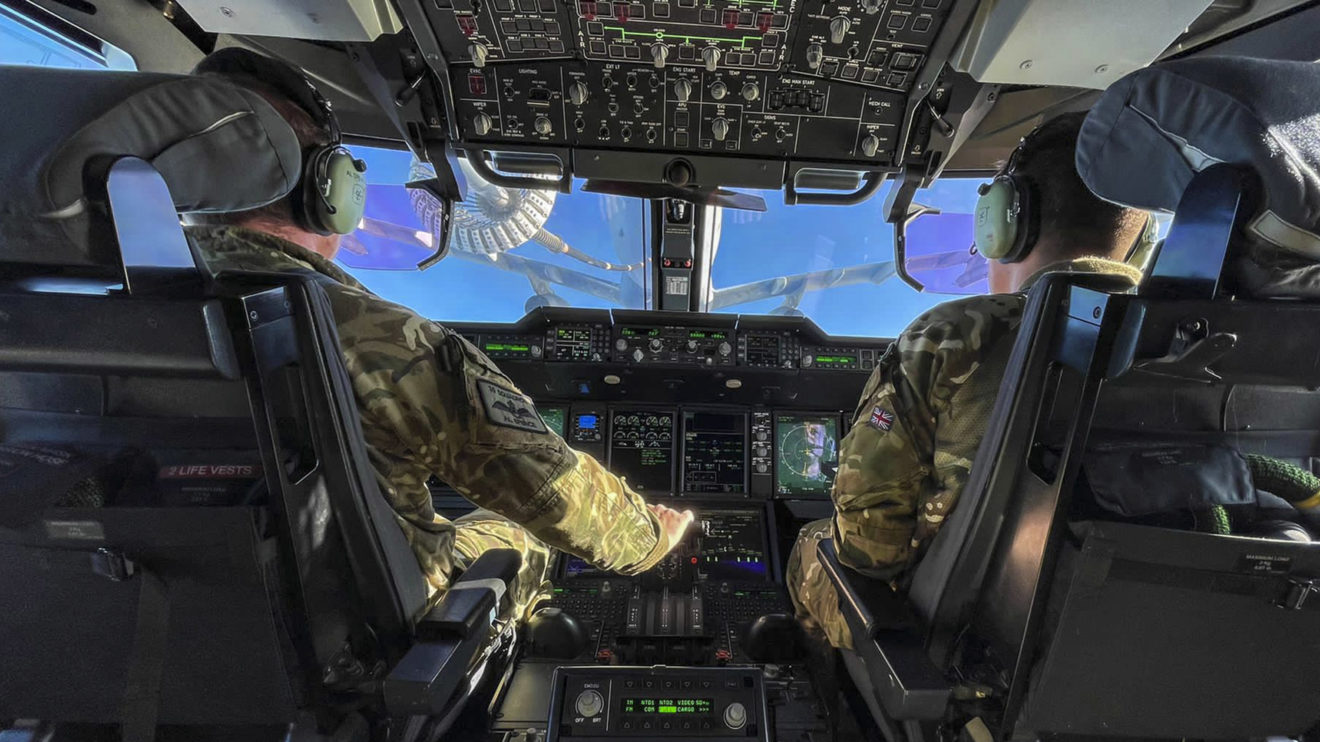 LONDON – A Royal Air Force Atlas C1 (A400M) transport aircraft from RAF Brize Norton has been refuelled over the South Atlantic for the first time. The Air-to-Air Tanking operation was conducted from a RAF Voyager aircraft flying from the Falklands Islands.

The Atlas was flown from RAF Brize Norton to the Ascension Island, before then flying on to the Falklands. During the flight the transport aircraft was met by a RAF Voyager over the South Atlantic, that had earlier taken off from Mount Pleasant Complex, the principal military base on the Falkland Islands.

The Atlas aircraft was refuelled using what is known as the probe-and-drogue system.  The refuelling probe extends from the front of the transport aircraft above the cockpit.  The pilot then has to dock this probe into the basket of the drogue that has been extended from the Voyager to allow refuelling.

The Captain of the Atlas aircraft was Squadron Leader Al Spence from 30 Squadron who said: “It was a fantastic privilege to be part of this mission; being part of any ‘first’ is a big deal and being able to demonstrate what we can do with this aircraft is what it’s all about.”

Air-to-Air refuelling is one of the most difficult manoeuvres that pilots carry out and requires intense concentration from both the crews. The operation requires the pilot of the receiving aircraft to maintain close formation with the tanker aircraft for the duration of the activity while fuel is transferred by the Mission Systems Operator, flying in the Voyager.

“It was a great privilege to Captain the Voyager on the first operational re-fuel of an Atlas, after successfully meeting them some 900 nautical miles south west of Ascension Island and 2600 nautical miles north east of Mount Pleasant Airfield.”

“The Voyager’s capability to extend the global reach of our aircraft is remarkable.”

The RAF Voyager that is based at Mount Pleasant airfield is maintained by an engineering support team that ensures the aircraft is ready to fly 365 days a year in some of the most challenging conditions faced across the globe.

Sergeant Juerschik from 101 Squadron, the Mission Systems Operator controlling the refuelling from the Voyager, said: “This is the first time the Atlas has been refuelled operationally and by any of the crew, which provided a new exciting opportunity.”

“Whilst I have refuelled the Atlas in the simulator, it had no comparison to the operational pressures of being over the sea with more than 900 nautical miles to nearest land.  As a crew, we delivered more than 20 tonnes of fuel to the Atlas.”

“This enabled members of 30 Squadron to deliver the aircraft and essential parts to the Typhoon Force in the Falklands.”

The successful completion of this sortie increases the capability of the RAF Brize Norton based Air Mobility Force to deliver essential cargo right to where it needs to be. The flight demonstrated that increased capability to deliver freight and personnel to the South Atlantic when required.