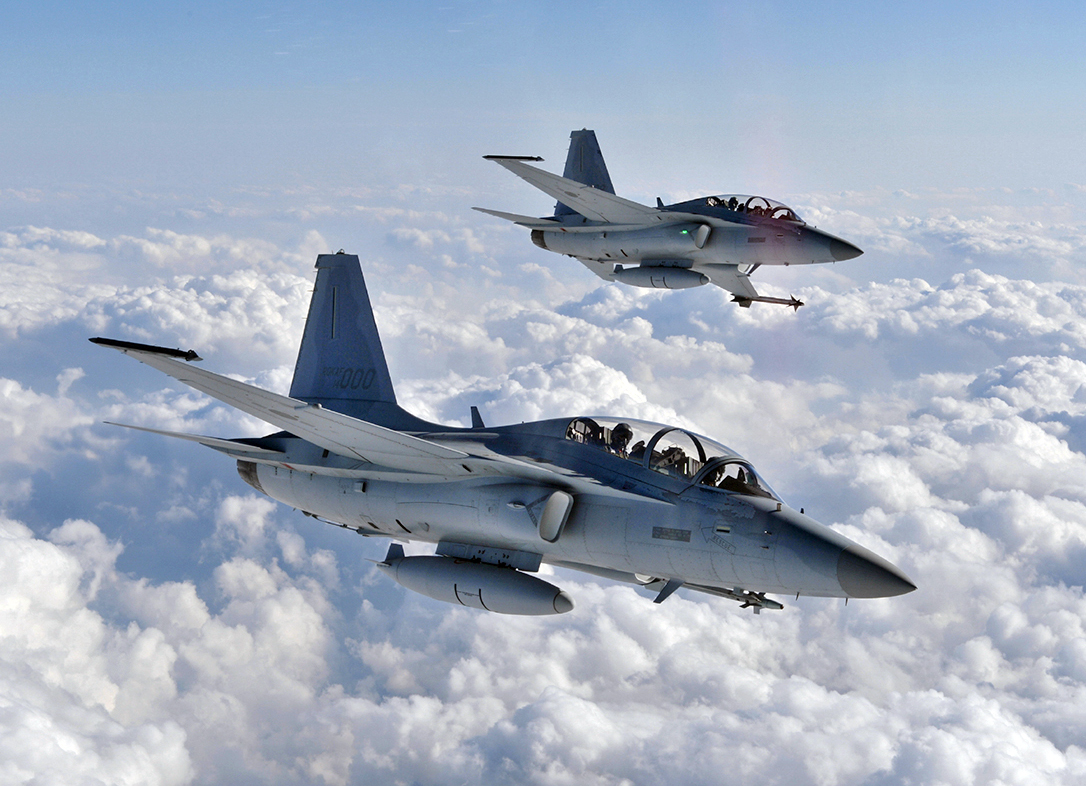 WARSAW – On July 27, a contract was signed at Poland’s Ministry of Defense for the purchase of 48 KAI FA-50PL light combat jets for the Polish Air Force.

This also includes a logistics and training armament package.

The procurement has become urgent in light of the Ukraine conflict, and an increasing need to replace the last of the MiG-29 and Su-22 fighters in Polish air force service, and Lockheed Martin would not be able to supply Poland with additional F-16s in the required timeframe. It was noted that Polish F-16s are currently policing the airspace of neighboring Slovakia while that nation awaits deliveries of its own F-16s.

“Currently, no option to procure new F-16s exists, due to the manufacturer’s policy – as Lockheed now focuses on the F-35. I have talked about this multiple times, with our US partners. We cannot wait, while the FA-50 deliveries would happen next year, ” stresses the head of the Polish Ministry of Defence, Mariusz Błaszczak.

The Minister has also outlined the upcoming stages in the acquisition of the Korean K2 MBTs and K9 howitzers, along with a transfer of technology.

Blaszczak also highlighted the commonality between the FA-50—which was jointly developed with Lockheed Martin—and F-16 in terms of systems, which would allow the new aircraft to be integrated seamlessly into the existing infrastructure.

It would also streamline training as conversion between the FA-50, and the F-16 can be accomplished rapidly. Moreover, he stated that is closely monitoring the progress of Korea’s KF-21 Boramae 4.5 generation fighter, which made its first flight on July 19.

Armament Agency spokesman Lt. Col. Krzysztof Płatek said that the purchase of the aircraft was decided “primarily by their availability and the fact that they can quickly replace aging post-Soviet technology – Su-22 and MiG-29 aircraft.”

The operation of these already age-old machines must be ended soon, due to the lack of spare parts. These were sourced from Ukraine, which is not possible at present; moreover, after the Russian aggression against the country, its own stock of parts and armaments was transferred to the Ukrainian side.

According to the Polish media outlets In the first stage, the Polish side will receive 12 aircraft in the current standard FA-50 Block 10 configuration, to be delivered in the second half of 2023.

Due to the fast pace of deliveries, these will most likely be modified TA-50 Block 2, which are currently on the production line at KAI plants and were originally intended for the Korean Air Force.

The TA-50 advanced training (LIFT) machines have the same airframe as the FA-50 and differ from the combat aircraft only in their equipment, which will be brought to FA-50 Block 10 configuration before shipment to Poland.

Block 10 aircraft have a rather limited striking capability, which boils down to the ability to use AGM-65 Maverick missiles, Mk 80 series unguided bombs, or guided JDAMs guided by fixed GPS coordinates.

For self-defense, the machine can carry the only obsolete AIM-9M/P air-to-air missiles, which are not in the SP RP’s inventory. A Mark XIIA standard identification system will be installed for Polish needs.

Starting in 2025, the manufacturer will begin delivering a batch of 36 in the FA-50PL target configuration. Deliveries of these aircraft are expected to take another 2-3 years.

The FA-50PL will be similar to the Block 20 version currently under design, with the variant expected to have an AESA-class radar, a Link-16 data exchange link, as well as the ability to take the Sniper targeting tray (purchased for the Polish F-16s), which will allow self-lighting of targets for laser-guided weapons.

The Block 20 will also be able to use modern AIM-9X air-to-air missiles, already in the arsenal of the Polish SP. According to the latest details, the aircraft will also receive an in-flight refueling system.

A representative of the Armament Agency revealed that talks are underway on the possible integration of Brimstone missiles and medium-range air-to-air missiles. All previously delivered aircraft will be brought up to the latest standard.

A service center for FA-50 aircraft is to start operating in Poland in 2026, and full training capabilities will also be established in the future.

However, initially, in order to accelerate the process of achieving combat capabilities for Polish personnel, training will be carried out partly in Korea.

The president of Korea Aerospace Industries announced that Poland could become a regional hub for FA-50 service and training if it is purchased by other European countries.

This is expected to be feasible, he said, as talks are underway with neighboring European countries to sell 100-200 FA-50s.

As the Defense24.com portal discusses, three additional squadrons of combat aircraft could be created from the 48 aircraft, which would serve alongside three squadrons of F-16C/D (which Poland is likely to upgrade to Block 72 standard in the near future) and two squadrons of F-35A.

This would give a total of eight squadrons and 128 combat aircraft, and this was after the complete withdrawal of the anachronistic Su-22 and MiG-29.

In peacetime, these aircraft could serve as “workhorses” of the Polish Air Force, which would perform air policing and training-type missions.

The latter costs, however, are not expected to be large, as many of the infrastructure elements and technical solutions in the FA-50 are identical to the F-16C/D.

This is how the aircraft was designed from the beginning, which Air Force Inspector Gen. Pszczoła even described as a “small F-16.”

The FA-50, known popularly as the “Fighting Eagle,” is a single-engine (GE-F404) light fighter based on the KAI T-50 trainer.

The wide range of weapon systems aboard the FA-50 jet allows it to counter multiple threats in today’s complex battlefield scenario.

One of the largest contracts for Poland

In addition to the FA-50 aircraft, Poland bought K2 tanks and K9 howitzers. This is one of the most important and largest Polish defense orders in recent years.

The order of K2 tanks was divided into two stages.

In the first, 180 tanks will be procured (deliveries will begin later this year).

The second stage involves 820 tanks of the K2PL standard and the launch of production of K2PL tanks in Poland in 2026. Tanks procured in the first stage will also be fielded and brought to the K2PL standard.

The first stage of deliveries, involving the delivery of 48 K9 howitzers, will begin as early as this year. Deliveries of more than 600 more howitzers will begin in 2024, with production in Poland starting in 2026.

The K9s will be equipped with Polish communications systems from the start. Also will be plugged into the Topaz integrated battle management system.