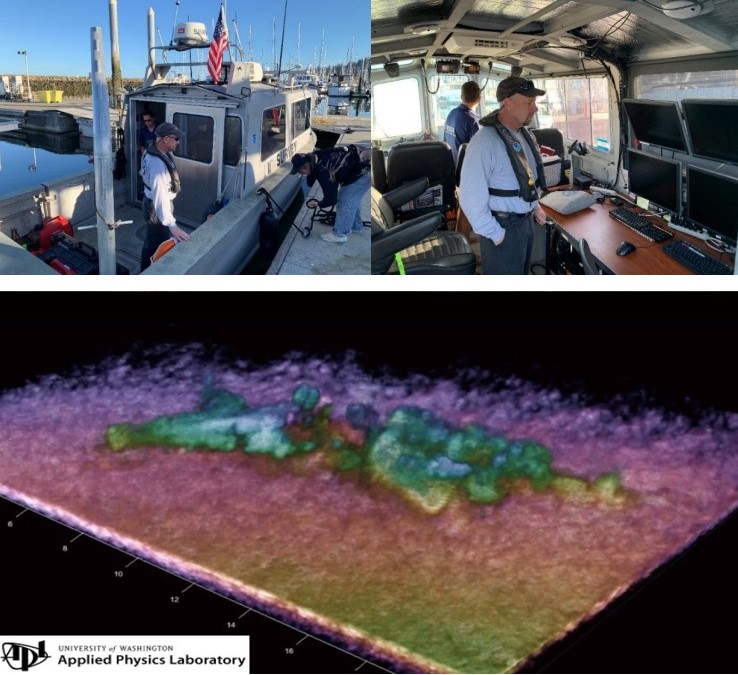 LONDON – The US National Transportation Safety Board (NTSB) and the U.S. Navy will recover the wreckage of the DHC-3 Turbine Otter that crashed on September 4 off Whidbey Island, Washington.

At the same time, the safety authority has released its Preliminary Report into the accident. In a statement issued yesterday, the NTSB advised that preparations for the recovery of the aircraft, which crashed in the waters off Whitby Island are underway.

The main recovery effort to raise the wreckage is expected to begin on September 26. AviationSource has previously provided a coverage of events following the Mutiny Bay plane crash.

The NTSB had worked in coordination with the National Oceanic and Atmospheric Administration (NOAA) and the University of Washington’s Applied Physics Laboratory using side scan sonar, multibeam sonar, and 3D instruments to locate the wreckage.

Last week the sonar equipped survey vessel located and identified the remains of the aircraft lying on the seafloor. The main wreckage and debris field lies at a depth of approximately 190 feet.

Image: The wreckage on the seafloor taken on September 10 by the University of Washington’s vessel using side scan sonar. Image Credit: NTSB

Due to the relatively shallow depth of the water and the current (3-5 knots), the most suitable tool for recovery is a work class remotely operated vehicle (ROV). The U.S. Navy will use the ROV Deep Drone 8000​, a barge and a crane to recover the wreckage from the seafloor.

Once the barge is outfitted and in place, the recovery operation with then operate non-stop. The crane will lift the aircraft wreckage pieces.

The ROV will operate on the seafloor collecting smaller pieces of wreckage into baskets and also assist by connecting the wreckage to the crane to be lifted.

Concurrent with their statement advising of the recovery operation, the NTSB has also released their Preliminary Report into the accident.

On September 4, 2022, at 1509 Pacific daylight time, a de Havilland DHC-3, registered N725TH was substantially damaged when it impacted Mutiny Bay near Freeland, Washington, and sank. The pilot and 9 passengers were fatally injured.

The single engine floatplane had departed from Friday Harbor, Washington, with an intended destination of Renton Municipal Airport. It had been operating at a relatively low altitude, however the departure and cruise appeared normal.

The track data indicated the airplane flew a southerly heading before turning south-southeast. The en route altitude was between 650 and 975 ft above mean sea level (msl), and the groundspeed was between 115 and 125 knots.

At 3:09 p.m. local time, the aircraft impacted the water and sank. No radio transmissions or mayday call were issued by the pilot. Witnesses near the accident site reported the airplane was in level flight before it entered a slight climb, then pitched down in a near-vertical descent.

Several witnesses described the airplane “spinning,” “rotating” or “spiraling” during portions of the descent.

In the days following the crash, some floating debris was recovered by local authorities and other responders. This included three 6-ft sections of aluminium honeycomb panels used for flooring in the airplane, a seat cushion and seat belt, and small sections of foam, consistent with a modification made to the landing floats.

The NTSB Preliminary Report makes no findings as to the accident cause of the Mutiny Bay plane crash and the investigation will be ongoing.