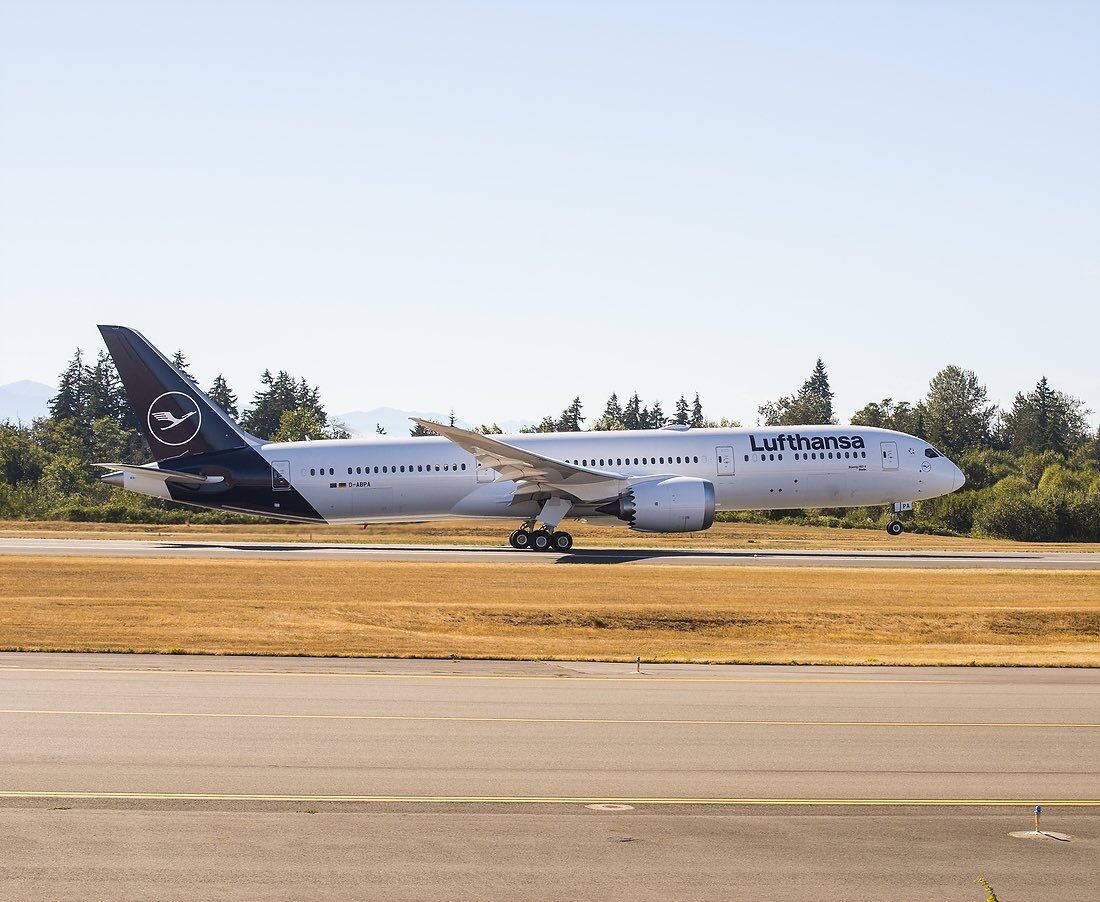 First flights will begin on October 19th, with the airline utilizing the aircraft for short routes, more notably being the Frankfurt-Munich rotation.

The flight numbers are as follows:

The flights are now bookable on the Lufthansa website, so enthusiasts and standard passengers alike can book and enjoy this unique experience.

Lufthansa received its first 787 on August 30, having come straight from the Everett Delivery Center in Seattle.

The aircraft is registered as D-ABPA. According to data from RadarBox, the aircraft flew from Paine Field, U.S., to Lufthansa’s hub in Frankfurt, Germany, as DLH1ST, after departing Paine Field at 16:28 pm local time and arrived in Frankfurt at 11:00 am the following morning after a nine-hour and 32-minute flight across Canada, the Atlantic Ocean and over the United Kingdom to head into Europe.

This is the Lufthansa Group’s first Boeing 787 Dreamliner of the 32 they have on order, leaving 31 left to be delivered to the Group over the coming years.

As well as the remaining 31 Boeing 787’s they have on order, the Lufthansa Group also have orders for 20 Boeing 777-9X aircraft and a recent order for seven Boeing 777-8X Freighters to bolster their Lufthansa Cargo subsidiary.

For Boeing, this is their fourth 787 delivery since the deliveries of the type were halted back in April 2021 following the FAA (Federal Aviation Administration) investigating manufacturing defects of the type.

The other three deliveries prior to Lufthansa’s first were two Boeing 787-8 Dreamliners to American Airlines (N880BJ and N876AL) and one Boeing 787-10 Dreamliner to KLM Royal Dutch Airlines (PH-BKH).

It is expected that Lufthansa will utilize their new Boeing 787 Dreamliners across their long-haul network, replacing their aging Airbus A340 fleet as well as expanding their long-haul route network alongside their Boeing 747-8’s and Airbus A350-900s.

Commenting on their new aircraft arrival, Lufthansa Airlines’ Chief Executive Officer (CEO), Jens Ritter, has said, “With the Boeing 787, we are introducing another modern aircraft type that is one of the most fuel-efficient long-haul aircraft in our fleet.”

“This will allow us to significantly further improve the average CO2 balance. This aircraft is sustainable and offers customers a premium flying experience.”

Adding to Ritter’s comments, Stan Deal, President and Chief Executive Officer of Boeing Commercial Airplanes, says, “Today’s delivery to the Lufthansa Group is a significant milestone for both companies as we resume European 787 deliveries and Lufthansa receives its first 787.”

“I am delighted to see Lufthansa join a growing set of airlines worldwide operating the industry’s most capable twin-engine airplane. With unmatched fuel efficiency and huge passenger appeal, the 787 will play an integral role in the Lufthansa Group’s long-haul network.”

With the arrival of their new 787, Lufthansa will offer passengers a new flying experience and improved comfort over their aging Airbus A340s, where travelers will also see a benefit of reduced jet lag tiredness, as well as the Group, seeing a benefit financially with the aircraft consuming less fuel to do the same duration of flight that their Airbus A340’s do.