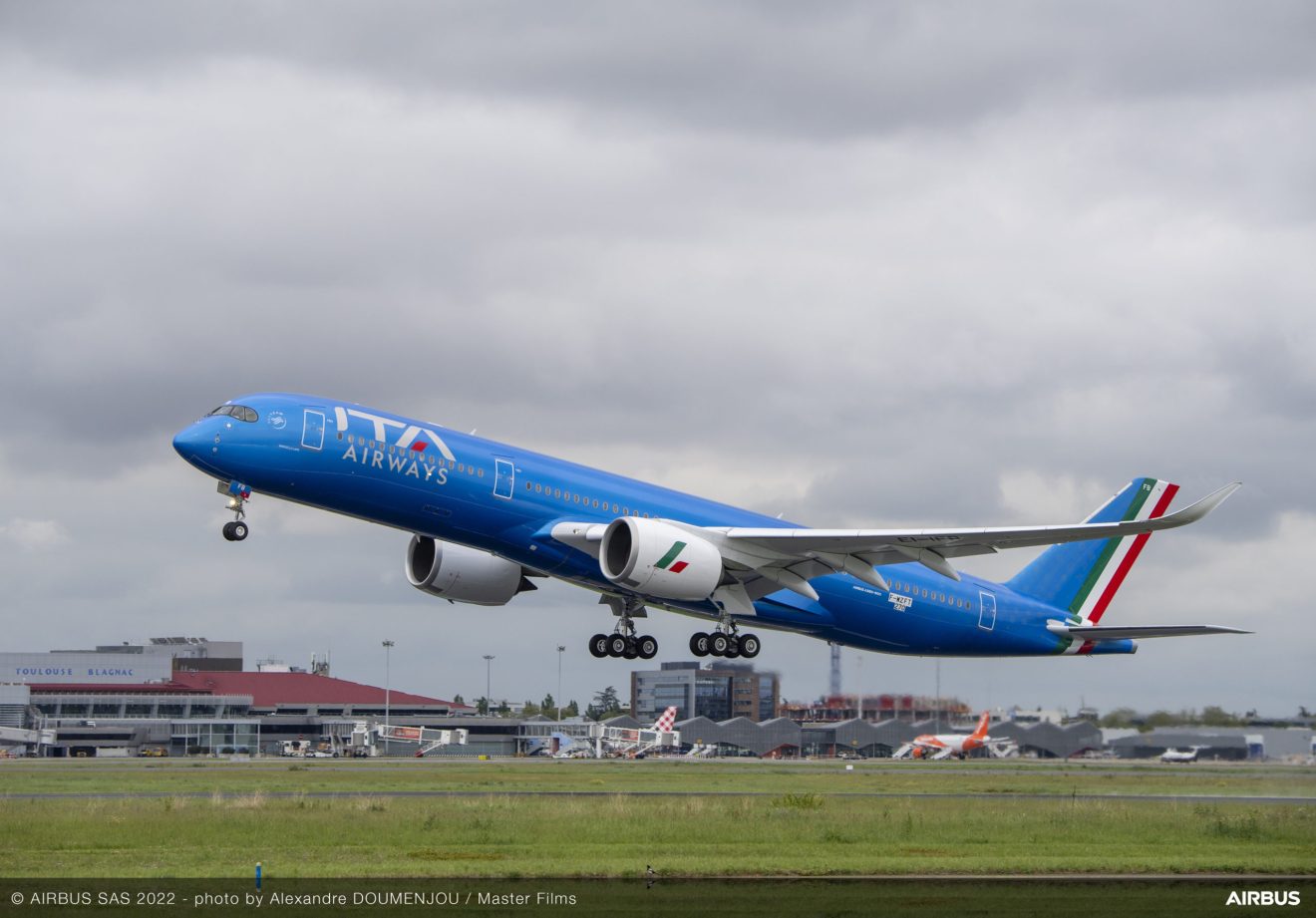 LONDON – ITA Airways, the Italian flag carrier has taken delivery of the first of its seven Airbus A350 aircraft.

The airline has set its course to equip its fleets with long-range aircraft to capture a sizable share of the upcoming summer season.

The new Airbus A350 aircraft, leased from ALAFCO landed at Rome Fiumicino Airport in Italy on the evening of 11th May 2022.

The new ITA Airways A350 has been configured in two cabin classes with 33 full flatbed business class seats and 301 economy class seats bringing the total capacity to 334.

ITA Airways will be deploying a new A350 on the airline’s new long-haul destinations to Los Angeles, Buenos Aires, and São Paulo starting from June 2022, with the aim to capture sizable summer season traffic which the airline is predicting after harsh pandemic years that have hampered the international travel.

The new Italian carrier placed an order for a total of 28 aircraft with principal producer Airbus in early December 2021.

With reports from Airbus, the manufacturer has also mentioned that ITA has already leased 50 next-gen Airbus aircraft which include six Airbus A350s, which will help ITA in its fleet modernization initiative.

In April this year, ITA’s Airbus A350-900 did its preliminary flight at Toulouse, France, the Airbus Industries headquarter. The aircraft is painted in blue color with distinctive ITA livery and branding.

The new Airbus A350 is destined to give a long-haul operational strategy of ITA, which will help the airline to re-establish its presence in the international market in the North and South American continent, where the first deployment is scheduled to take from June 2022.

The new Airbus A350 has been designed with the most cutting-edge aerodynamics, ultramodern technology, and fuel-efficient Rolls-Royce Trent XWB engines, allowing operators to reduce fuel consumption and carbon footprint.

As the ITA has been making headlines with regards to its sale by the government attracting new bidders from the leading aviation giants, the government has determined to sell the carrier by end of June.

The new government decree has established that the ITA will be privatized via direct sale while retaining a minority, non-controlling stake in the first stage of the privatization process.

German carrier Lufthansa group and its partner MSC have been considered the primary bidders for the ITA takeover.

Along with them, US fund Certares and Indigo Partners (Wizz Air investor) have also expressed their interest in the ITA takeover in recent days.