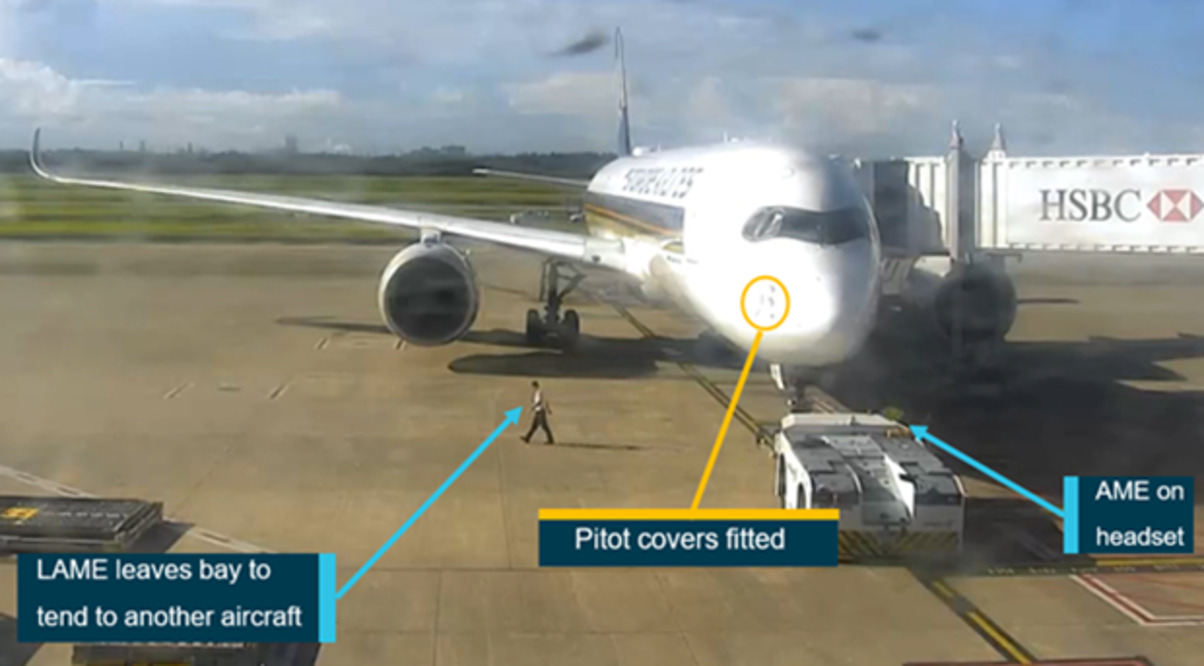 LONDON – The Australian Transport Safety Bureau (ATSB) has released its preliminary report into an incident involving a Singapore Airlines A350 aircraft being readied to depart Brisbane Airport.

On 27 May 2022, a Singapore Airlines Airbus A350-941, registered 9V-SHH, was being prepared on bay 81 for a regular public transport flight from Brisbane Airport, Queensland to Changi Airport, Singapore, as flight number SQ256.

The ATSB preliminary report details the sequence of events that resulted in the aircraft’s pitot covers only being removed just prior to pushback. The oversight was only picked up when an aircraft refueller working at a nearby bay noticed the pitot covers still in place and alerted the responsible ground crew.

The pitot tube mechanism forms part of the external pressure sensing apparatus for the aircraft airspeed indicators. Equipped with a small diameter hole to read dynamic air pressure, the pitot tubes are prone to becoming blocked by foreign objects.

The pitot covers provide protection whilst the aircraft is on the ground, and must be removed as part of the pre-flight walkaround prior to flight. Brisbane Airport is prone to mud wasps, which will typically form nests and block fine outlets like pitot tubes.

A completely or partially blocked pitot tube can result in incorrect airspeed readings, which can have serious consequences. “

As pushback approached, the pitot covers remained in place until an aircraft refueller, working at an adjacent bay, observed them and alerted the supervising LAME.

As part of its investigation, to date the ATSB has interviewed the LAME, AME and the refueller, and reviewed airport security video, which did not show that the required final walk-around of the aircraft was conducted by either the LAME or the AME prior to dispatch.

The ATSB has previously highlighted the risks of pitot probe covers not being removed prior to departure with its investigation into a March 2018 incident where an Airbus A330 took off from Brisbane with covers still in place, meaning the flight crew were faced with unreliable airspeed indications.

“The loss of airspeed data due to mud wasp ingress can occur even after brief periods, and the use of pitot probe covers for aircraft turnarounds at Brisbane is largely an effective defence,” Dr Walker said.

“However, as that earlier ATSB investigation identified, their use introduces another risk, which is the potential for aircraft to commence a take-off with pitot probe covers still fitted.”

Figure 1. Security footage of Bay 81 showing SQ256 4 minutes before pushback with the pitot covers fitted and the LAME moving towards the adjacent bay:

Figure 2. Security footage of the refueler pointing towards SQ256 and informing the LAME that the pitot covers were fitted: