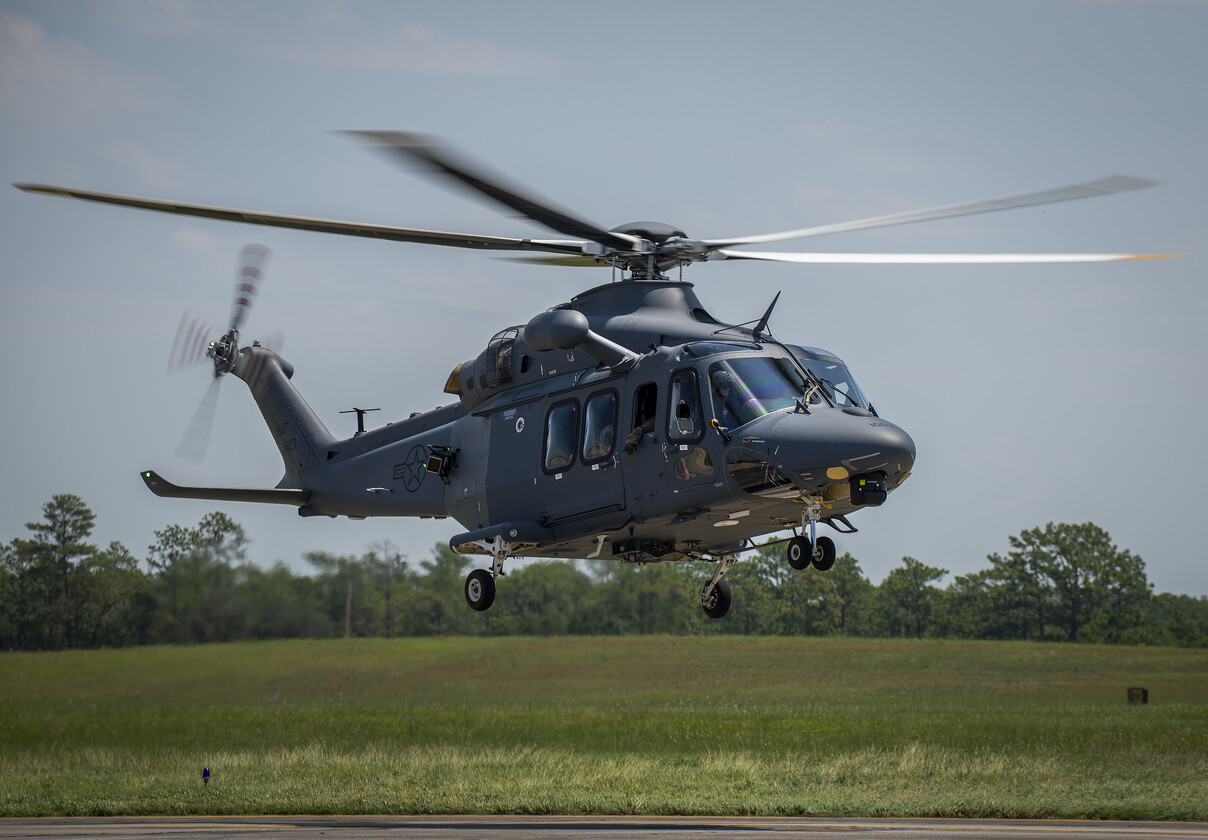 LONDON – Following the recent delivery of 4 MH-139A Grey Wolf helicopters to the US Air Force (USAF) by Boeing, the new arrival has now flown with an all-US Air Force crew for the first time this week.

Lt. Col. Mary Clark of the 96th Operations Group was tasked with piloting the Grey Wolf at Eglin Air Force Base earlier this month, shortly after the MH-139A gained its military release and approval on August 12.

AviationSource recently reported on the official handover of the MH-139A to all-USAF control by manufacturer Boeing and Leonardo.

Prior to the military flight release, a mix of both military and Boeing contractors shared the flight duties since the aircraft’s first arrival here in December 2019.

During this two-and-a-half-year period since first arrival, the military testing fell to the 413th Flight Test Squadron and the Air Force Global Strike Command Detachment 7, in which Lt. Col. Clark was a former commander. The 413th FLTS is the Air Force’s only rotary-wing developmental test unit.

The new status allows Air Force-only aircrew to conduct testing on military capabilities of the MH-139A as the program moves forward.

“This milestone really represents the beginning of Air Force testing for the Grey Wolf,” said Clark, a former requirements officer with the Grey Wolf program, now at the 96th Operations Group. “We can now open up those test points for the military and push the envelope more to ensure we’re delivering that operational capability the units need out of the helicopter.”

“We learned a lot over the last two years,” Clark said. “That experience allowed us to shape our test plans and ultimately save time. We already know some baseline foundational things we don’t have to re-establish in our own program.”

The all-USAF first flight was carried out under the helicopter’s new call sign, Lycan, which means werewolf, took place above and around Duke Field, an auxiliary field north of Eglin AFB.

The goal of the first flight was to validate processes, checklists, maintenance, emergency procedures and aircrew communication and coordination.

Tech. Sgt. Alexander Graves, an AFGSC Det. 7 special missions aviator, was part of both MH-139 first flights with Boeing in early 2020 and now the all-Air Force flight. “What an honor,” said Graves, a former C-130 Hercules loadmaster, who was chosen to be part of the Grey Wolf program.

“I never thought in my career I’d be in a position to do something like this. It’s so rewarding to finally test the things we’ve been building up and to see that work we put in over the last two years pay off now.”

Following this first flight, 15 months of further flight testing will take place, with the goal of validating the overall safety of the aircraft and to define its limits and flight maneuvers. From that baseline the USAF will further build tactics, techniques, and procedures.

“Today the leash was off”

The MH-139A is intended to replace the Air Force fleet of aging UH-1N ‘Huey’ aircraft. Ultimately the US Air Force will acquire up to Grey Wolf 80 helicopters, training devices, and associated support equipment. The aircraft will provide vertical airlift and support to four major commands and other operating agencies.

For Clark the initial all-USAF test flight was what she called a truly a magical moment.

“It’s just extremely satisfying to now own and fly something we worked so hard to get,” she said. “Today the leash was off, and we could finally run with the Grey Wolf.”