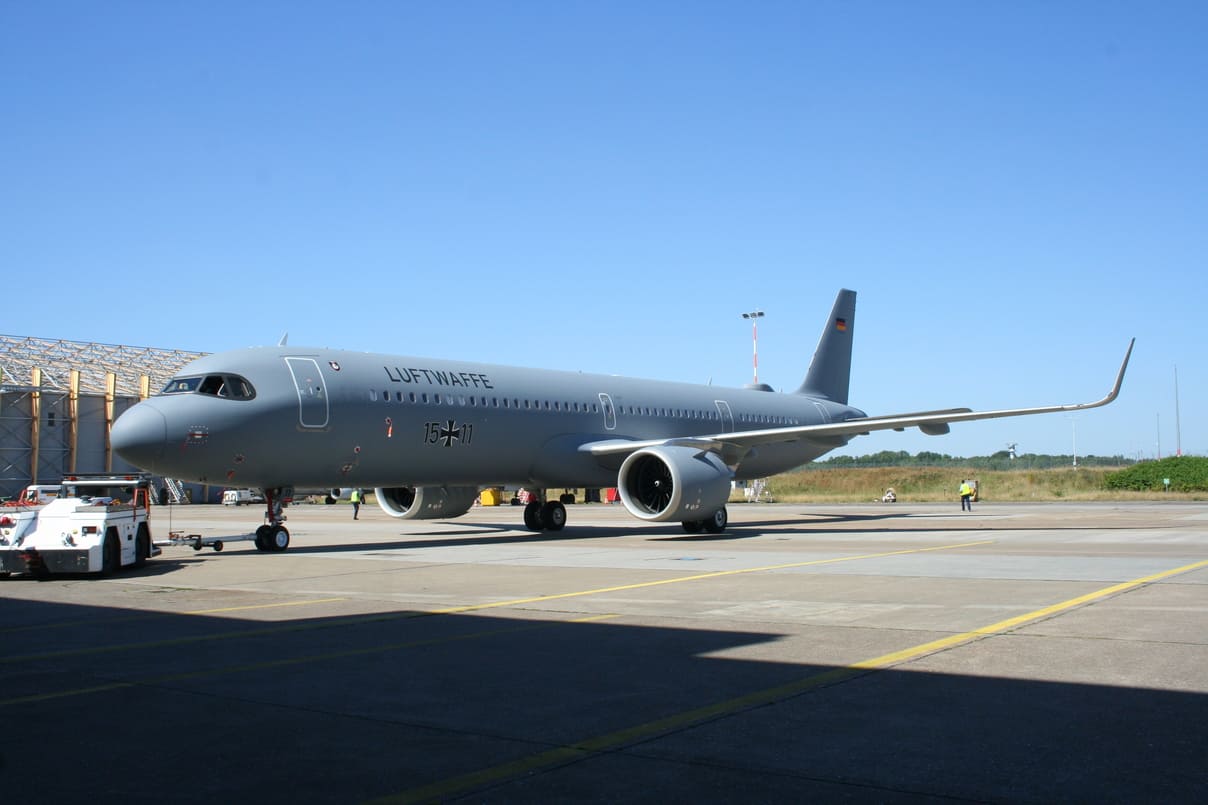 LONDON – The German Air Force has officially taken delivery of its second Airbus A321LR from Lufthansa Technik on 18 August. Although the ceremony for the acquisition of the new aircraft was held last Friday 12 August, the handover flight from Hamburg to Cologne-Bonn was carried out this week, on the 18th.

After the ceremonial handover, the brand new A321LR from Lufthansa Technik was transferred to the German Air Force. The new aircraft will be registered as 15+11, and will join its sister aircraft 15+10 for service with the German Air Force in manpower and troop transport.

It will also conduct parliamentary flights for European flights on short, medium and also long haul flights, given the impressive range of the A321LR itself. The seating capacity for the aircraft is 136 passengers.

The handover ceremony was a ‘muted’ one, meaning it did not receive much fanfare and press attention. The ceremony was located at Lufthansa Technik’s base in Hamburg, northern Germany with all involved stakeholders and employees/personnel who had been officially invited to bid farewell to the A321LR leaving the Hamburg plant but also congratulating the German Air Force.

The proceedings were also attended by individuals including high-ranking German officers from the German Federal Office of Bundeswehr Equipment, Information Technology and In-Service Support (BAAINBw), and the Bundeswehr Technical Center for Aircraft and Aeronautical Equipment (WTD 61).

They also included personnel from the German Air Force who had dealt with the previous A321LR the 15+11 respectively, on its flight testing and acceptance program. The German Air Force is now in full swing with its modernisation programme.

In the not too distant future, both newly delivered A321LRs will be briefly returned to Hamburg (Lufthansa Technik) to be remodified and for Medical Evacuation or Medevac purposes, and will also be certified for the modification as well.

This modification will also increase the aircraft range, and also support the German government’s mission in supporting multi-mission, in this case transporting patients, injured individuals and diseased passengers from wherever they are.

The Medevac moreover, is also capable of transporting six intensive care passengers or a maximum of twelve patients exhibiting mild symptoms or moderately sick or ill and injured patients.

The German medevac company was able to successfully complete numerous tasks for many Medevac missions, for example, the oxygen supply integrated to the two aircraft, already during the first phase of the refurbishment project.

The German Air Force has been remodifying and modernising its fleet of transport aircraft, starting from the A340 being replaced by the A350 and the A310s with the A321NEOs.

Not only transport aircraft are given an upgrade, the country’s armed forces are also evaluating its next-generation fighter aircraft.