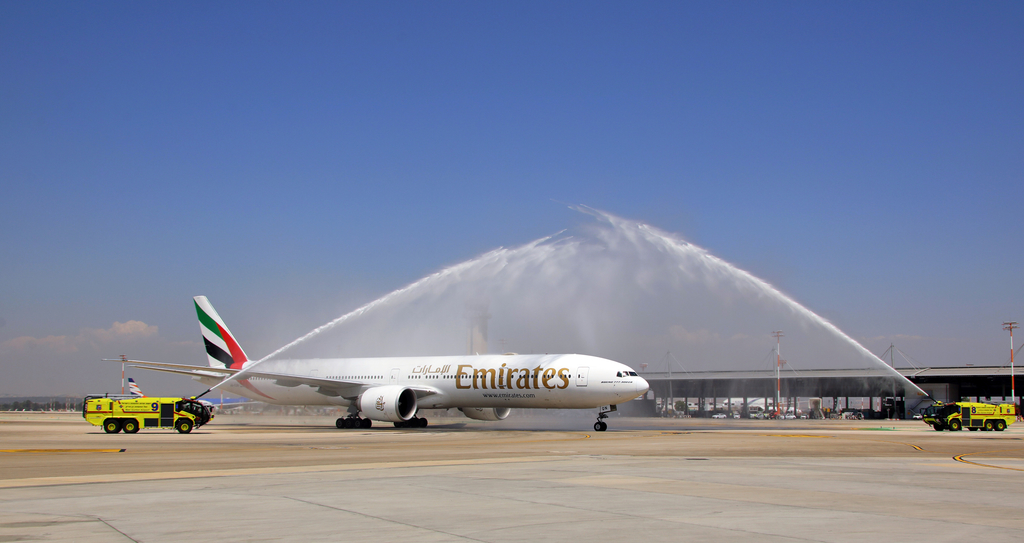 LONDON – On June 23, the United Arab Emirates Dubai based carrier, Emirates, launched its first ever service to the Israeli major city, Tel Aviv.

Marking an important milestone in the history between the United Arab Emirates and Israel, Emirates’ first ever scheduled service from Dubai to Tel Aviv has been officially inaugurated.

The return flight back to Dubai, EK932 then departs Tel Aviv Ben Gurion Airport (TLV) at 19:55hrs before arriving back into Dubai International Airport (DXB) at 23:59hrs, again after nearly a three hour flight. All times are local.

One of the main reasons why these particular flight times have been chosen for this new service is because they have been timed to provide convenient access to Dubai.

Connections also include some of Emirates’ popular destinations, such as, Australia, the Philippines, the Maldives, Sri Lanka, Thailand and Vietnam, most of which have flights that operate during the late night.

Today’s first flight was operated by A6-EQN, a nearly four year old Boeing 777-300ER. This particular 777 for Emirates has six first class, 42 business class and 306 economy class seats to carry up to a total of 354 passengers.

Truly signifying this new service, on board todays first flight was a high-profile delegation from UAE Government Officials to Emirates Executives.

Marking this major historical milestone for both countries, both Emirates’ Chief Operating Officer, Adel Al Redha and Israel’s Minister of Transport and Road Safety, MK Merav Michaeli have both commented.

MK Merav Michaeli has said, “The ties between Israel and the UAE are strategic economic ties and are critical to strengthening our position in face of the changing threads in the Middle East.”

“On my last visit to the UAE, I signed agreements that will facilitate the trade and mobility between us, mobility as a tool to empower the citizens and economies of both countries.”

“The step we are marking today is far beyond aviation, it is an important political step that blurs the physical boundaries between us and strengthens our mutual commitment.”

Adel Al Redha said, “We are excited about the launch of Tel Aviv service which adds to our growing network. From the time we first announced plans to include Tel Aviv in our global reservation systems, we received strong demand from travellers – not only in Israel, but also from many of our destinations including to and from the UAE.”

“Some of the high demand also came from Australia, Indonesia, Brazil, the United States, and the Philippines. This reflects the strength of our product offering, the reach of our global network and the efficiency of our hub Dubai for worldwide connections. Our new service will provide tourism, trade and business opportunities.”

“We look forward to welcoming our customers to experiences Emirates’ product on ground and on board, as well as enjoy a unique experience across all classes. We take this opportunity to thank our friends and partners for supporting the launch of the service.”