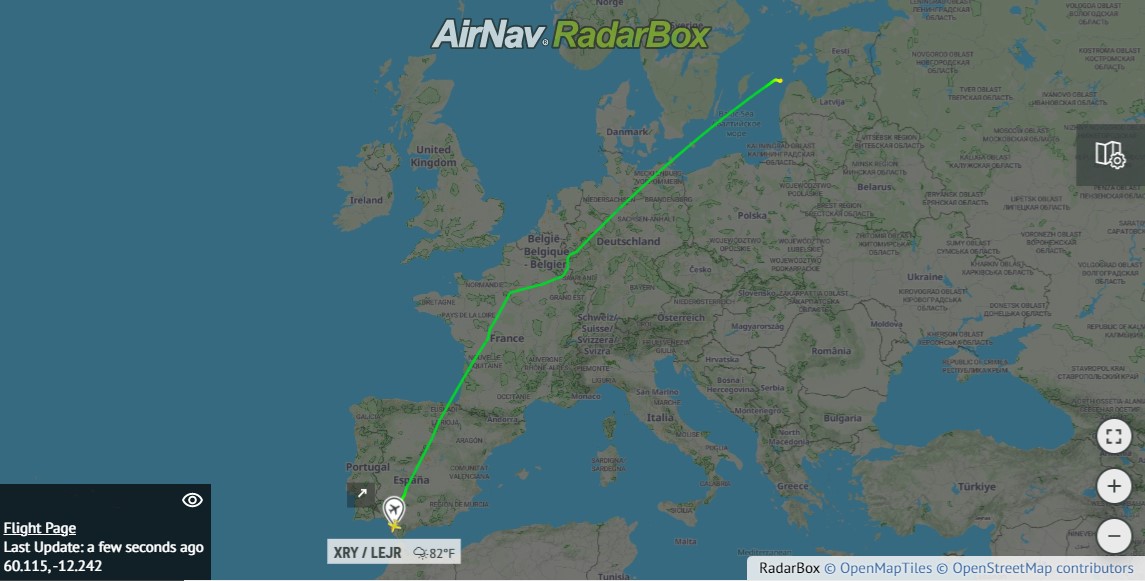 LONDON – A Cessna Citation 551, registration OE-FGR, flying from Jerez, Spain to Cologne, Germany lost contact with Air Traffic Control over Spain earlier this afternoon. The aircraft’s autopilot then appeared to fly the aircraft to the waypoints along its preselected flight route.

The Austrian-registered aircraft had departed from Jerez in Spain at 2.56pm local time today, Sunday 4 September, for Cologne. The flight had proceeded normally, until radio contact with it was lost. The Citation jet then continued on it’s flight planned course before overflying its destination of Cologne.

From overhead Cologne, the aircraft continued to fly as a “ghost flight” on a direct track which took it across Germany and out into the Baltic Sea. The aircraft was cruising at FL360, or 36,000 feet. The light twin-engine jet has a maximum service altitude of 43,000 feet.

The aircraft, a Cessna 551 Citation II (s/n 551-0021) is 42 years old, having first flown in October 1979. It recently operated a variety of flights across Europe and is now owned by a private owner.

In German airspace, the QRF Neuburg and Laage were scrambled to intercept the aircraft.

It has been confirmed that the aircraft had fuel to fly until 5:40pm UTC and was operating with 4 passengers on board.

According to some unconfirmed reports, a passenger was sighted in the cabin gesticulating to intercepting Air Force personnel. Both German and Danish military jets were sent up to survey the aircraft, and Johan Wahlstrom of the Swedish Maritime Administration stated: “They could not see anyone in the cockpit.”

5:37pm UTC: The aircraft turned east towards the Baltic sea port of Ventspils, Latvia before making another turn shortly thereafter.

5:45pm UTC: According to FlightRadar24 the aircraft crashed into the Baltic Sea, indicating a descent rate of -8000ft per minute.

6:24pm UTC: SAR vessels are in attendance at the crash site in the Baltic Sea. The Latvian Coast Guard vessel KA14 Astra also now appears to be making its way to the accident site.

6:45pm UTC: News sources are reporting that the aircraft had four persons on board. The German newspaper Bild has referred to sources who have claimed that the owner/pilot had previously reported problems with the Citation’s cabin pressurisation system.

It is understood at this stage that the pilot, a man, a woman and their daughter were the occupants of the aircraft. Bild have also claimed that air traffic controllers had lost radio contact with the aircraft before it left Spanish controlled airspace.

7:30pm UTC: A private Scandlines commercial vessel which assisted in the search is leaving the crash site. The vessel had been travelling from Ventspils to Norvik, Sweden when it was requested to assist in the search. The Latvian Coast Guard vessel KA 14 and a Lithuanian SAR helicopter still remain on the scene.

Flight data from FlightRadar 24 shows a harrowing flight profile as the aircraft spiralled towards the Baltic Sea. The aircraft impacted with a recorded descent rate of -8,000 feet per minute.

A spokesman for the Cologne based charter company Quick Air has confirmed that the company owner Karl-Peter Griesemann was piloting the Cessna Citation jet on the flight from Jerez, Spain. Mr. Griesemann is also the owner of the aircraft. He was accompanied on the flight by his wife, daughter and daughter’s male partner.

The head of Latvia’s search and rescue effort, Peteris Subbota has also appeared on Latvian television, saying that a wreck, a concentrated waste patch and an oily slick have been spotted near the crash site, however no sign of those who were on board has been found.

Debris and human remains found: As the search operation continues by Latvian coast guard vessels and underwater ROV’s, SLt. Cmdr. Peteris Subbota, head of the Latvian military’s Marine Search and Rescue Coordination Centre, has made a statement to The Associated Press saying that “remains of human bodies we believe to be associated with the crash” have been found.

Navy spokeswoman Liva Veita has told the AFP news agency that “11 pieces of airplane debris were found in the sea, including fragments of airplane seats and some possible baggage items like shoes.”

Although the wreckage of the aircraft has not been located as yet, hopes are high for it’s discovery, given the depth of water at the site is approximately 200 feet.

This is a continuing story. Please check back for further updates.