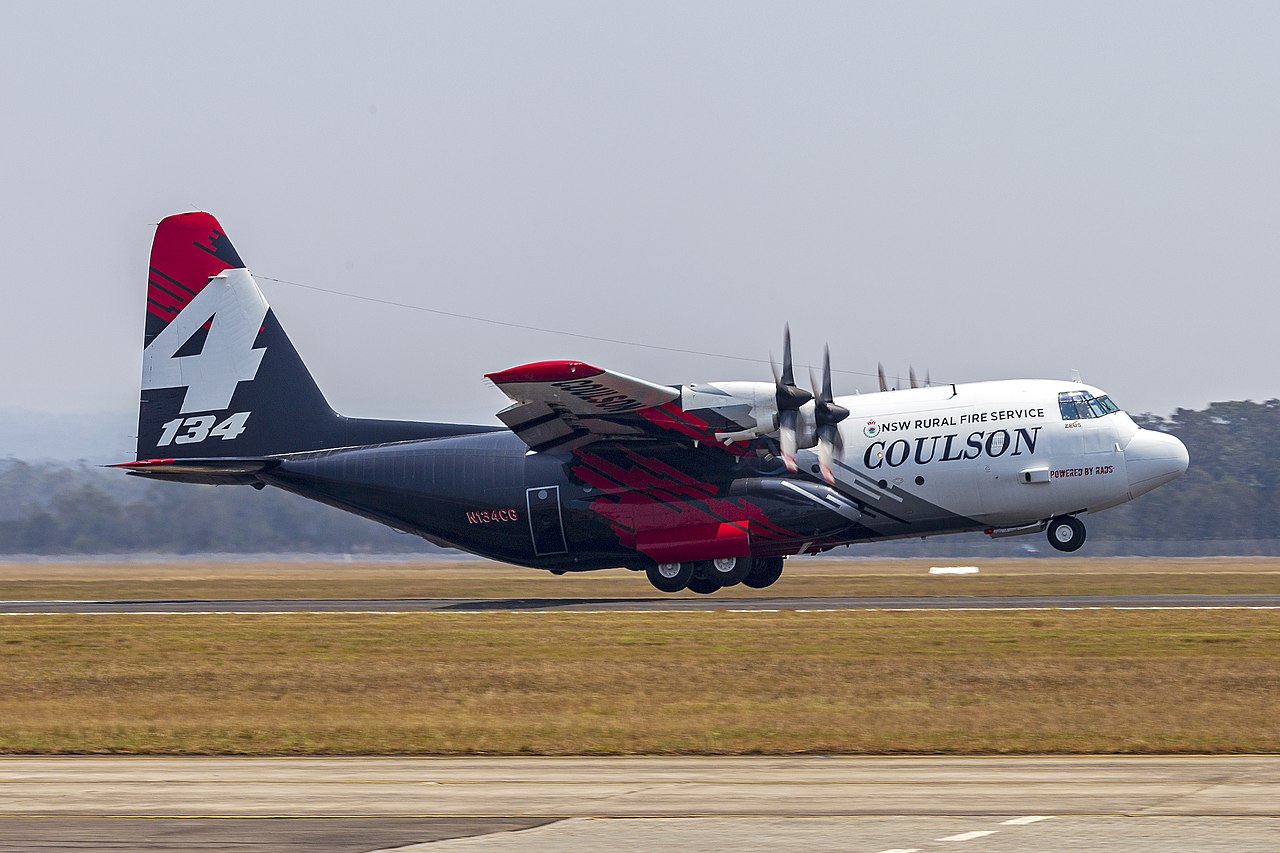 LONDON – The Australian Transport Safety Bureau (ATSB) report into the crash of a C-130 air tanker which claimed the lives of 3 US crew members who were battling bushfires has found the likely cause to be an aerodynamic stall, in severe conditions of windshear.

The Lockheed C-130 large air tanker (LAT), designated as Tanker 134, was owned by US operator Coulson Aviation, and was on contract to New South Wales Rural Fire Service (RFS).

All three crew on board were fatally injured when the aircraft impacted slightly rising terrain, while conducting a climbing left turn away from the drop site at the Good Good fire-ground near Peak View, north of Cooma, in the NSW Snowy Mountains region, on 23 January 2020.

The tanker had just made a retardant drop and was climbing away in hazardous conditions, which included strong windshear and increasing tailwinds. The C-130 crew were likely unaware that other smaller air tanker aircraft had terminated operations in the area due to the bad conditions.

A birddog aircraft – the light GA aircraft which assists the tankers setting up their approach line to the drop zone – had turned down the tasking due to the conditions.

Strong gusting winds and mountain wave activity, producing turbulence, were both forecast and present at the drop site. Both the fire and the rugged local terrain at the fire-ground likely exacerbated these hazardous conditions, the investigation report notes.

These conditions were conducive to the development of windshear (sudden changes in wind direction and speed), and downdraft development at a time when the aircraft was most vulnerable, with a low airspeed and at a low altitude.

Mountain waves are severe up- and down-draughts on the lee side (non-windward side) of mountainous terrain. Dangerous rotor zones of spiralling air are also created at lower levels below mountain peaks. Diagram: Public domain via Wikimedia Commons

During the Australian ‘black summer’ of 2019-2020, the east coast experienced many severe bushfires. As part of the firefighting efforts, small and large aircraft were used for aerial fire suppression and intelligence gathering.

B137 tasked to Adaminaby

The 737 departed first, and after conducting a drop at Adaminaby, its crew reported that conditions precluded them from returning to the fire-ground.

The pilot reported that while assessing the conditions in the fire area, the aircraft had rolled up to 45° angle of bank (due to wind), and they received a windshear warning from the aircraft’s onboard systems.

Operating from the windward side to avoid leeside turbulence, they managed to carry out a successful retardant drop.

After completing the drop, the B137 crew sent a text message to the birddog pilot indicating that the conditions were “horrible down there. Don’t send anybody and we’re not going back.”

The birddog pilot had experienced similar weather conditions in the same regions two weeks prior, which had required him to execute an escape manoeuvre to avoid incident.

Thus, on receipt of the tasking direction to Adaminaby, the birddog pilot reviewed the weather and concluded that the conditions were forecast to be worse than what he had previously experienced, and therefore declined the task.

The C-130 tanker B134 was then dispatched to the fire at Adaminaby. While enroute, the pilot in command (PIC) of B137 called to inform them of the actual conditions, and advised that it (B137) would not be returning to Adaminaby.

After arriving at Adaminaby, the PIC of B134 contacted the air operations officer at the Cooma FCC by radio, advising them that it was too smoky and windy to complete a retardant drop at that location.

The Cooma air operations officer then provided the crew with the alternative location of the Good Good Fire, about 58 km to the east of Adaminaby and B134 diverted there. On arrival, Tanker B134 was the only aircraft on the scene.

After dropping a partial load of retardant, the aircraft made a left turn which put it into tailwind conditions, and it climbed for approximately 10 seconds to about 170 feet above the drop height.

Following this, the aircraft was observed descending. It was seen at a very low height above the ground, in a slight left bank, immediately followed by a significant left roll as the left wing struck a tree just before ground impact. The three crewpersons were fatally injured and the aircraft destroyed.

The ATSB report noted several issues with operating procedures by both the New South Wales Rural Fire Service, and the contractor Coulson Aviation. Notable amongst there were:

The New South Wales Rural Fire Service did not have a policy or procedures in place to manage task rejections, nor to communicate this information internally or to other pilots working in the same area of operation.

Coulson Aviation’s safety risk management processes did not adequately manage the risks associated with large air tanker operations. There were no operational risk assessments conducted or a risk register maintained.

A full copy of the ATSB final report can be found here.