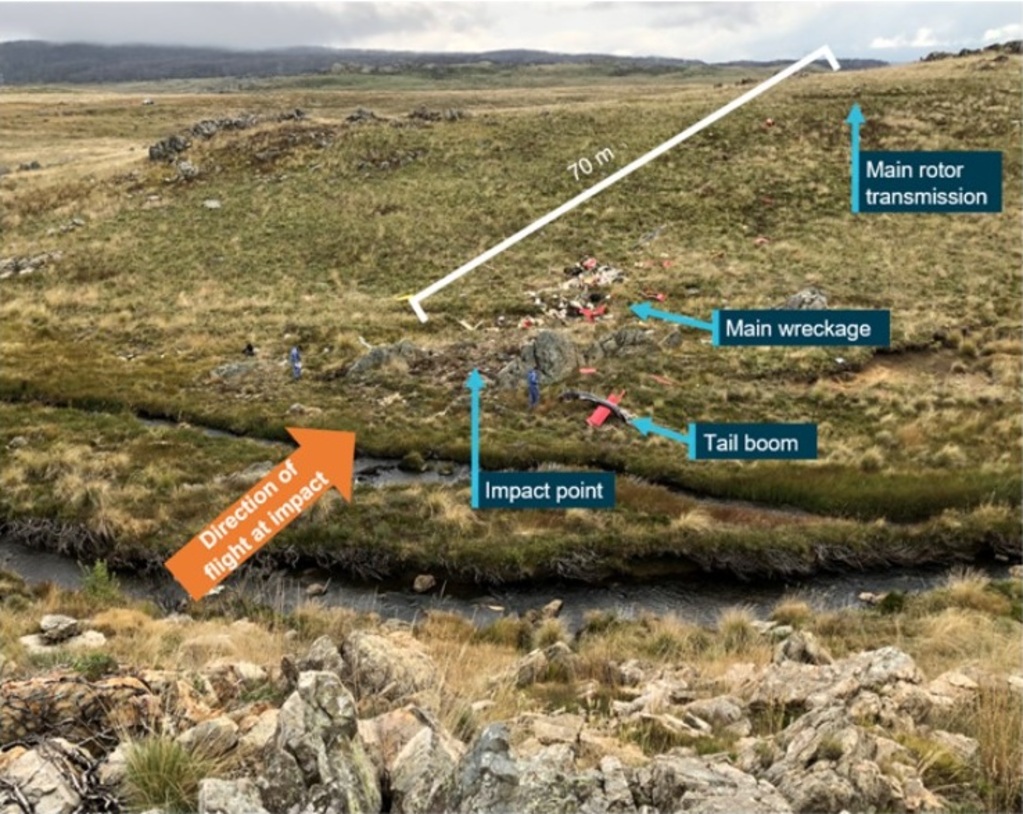 LONDON – The Australian Transportation Safety Bureau (ATSB) has today released its preliminary report on a Bell Long Ranger accident in the Kosciuszko National Park on 3 April.

The Bell 206-L4 helicopter, registered VH-PRW had been operating under visual flight rules (VFR), and was one of seven helicopters on a flying tour, following a common itinerary but operating independently of one another.

The report released by the ATSB today details the factual information collected by Bureau investigators to date. It makes no findings or analysis, which will be provided in the final report at the conclusion of the investigation.

The preliminary report states the following:

The helicopter collided with terrain at Kiandra Flats, 4,501 ft above sea level, after a steep left descending turn from 7,400 ft, fatally injuring the pilot and passenger.

Earlier on the day of the accident, the helicopter had departed from Majura, north of Canberra Airport, operating under visual flight rules (VFR). It was one of seven helicopters on a flying tour, following a common itinerary but operating independently of one another.

The six other helicopters landed on a property near Wee Jasper after encountering deteriorating weather, while the pilot of the accident helicopter continued further south before landing alongside Long Plain Road in the Brindabella region.

When the LongRanger didn’t arrive at Wee Jasper, the other pilots contacted authorities, who launched a search.

“With the help of a passing motorist, the pilot of the LongRanger was able to reach mobile reception and contact other members of the tour group, and the search was called off,” ATSB Director Transport Safety Stuart Macleod said.

Almost three and a half hours after landing beside Long Plain Road, recorded flight tracking data showed the LongRanger took off again at 1453 local time.

“Police officers dispatched to locate the helicopter as part of the earlier search arrived at the site just after it took off, and observed the helicopter depart to the south at low level, in overcast conditions with low cloud and light rain,” Mr Macleod said.

The forecast for the area at the time of this second flight indicated broken cloud between 2,500 ft and 10,000 ft above sea level.

“About 10 minutes into this second flight, the pilot turned north-west and took up a track towards Tumut, which they had indicated to the tour group as their intended refuelling destination,” Mr Macleod said.

“They then encountered higher terrain and turned around to head southward, again following lower lying terrain for another 10 minutes, before reaching Anglers Reach, at which point they turned back on a track towards Tumut.”

The helicopter climbed to 7,000 ft above sea level – about 2,500 ft above ground level – and continued for about six minutes, before descending to 6,800 ft, and almost immediately climbing again.

“After climbing to 7,400 ft, the helicopter commenced the steep turn, its ground speed increased to 134 kt, and its descent rate exceeded 3,800 ft per minute.”

The helicopter impacted terrain at 1526 in an area of tussock grass, interspersed by bare protruding rock.

The following morning, in response to the LongRanger not meeting the tour group as planned at Mangalore, Victoria, a second search was initiated. Assisted by aircraft tracking data, a ground team located the accident site that evening.

The ATSB’s subsequent examination of the site indicated the helicopter’s engine was providing power at impact, and there was no evidence of an in-flight break-up or a pre-existing defect with the drive train or flight controls.

The ATSB investigation into the accident is ongoing, and a final report will be released at the conclusion of the investigation.