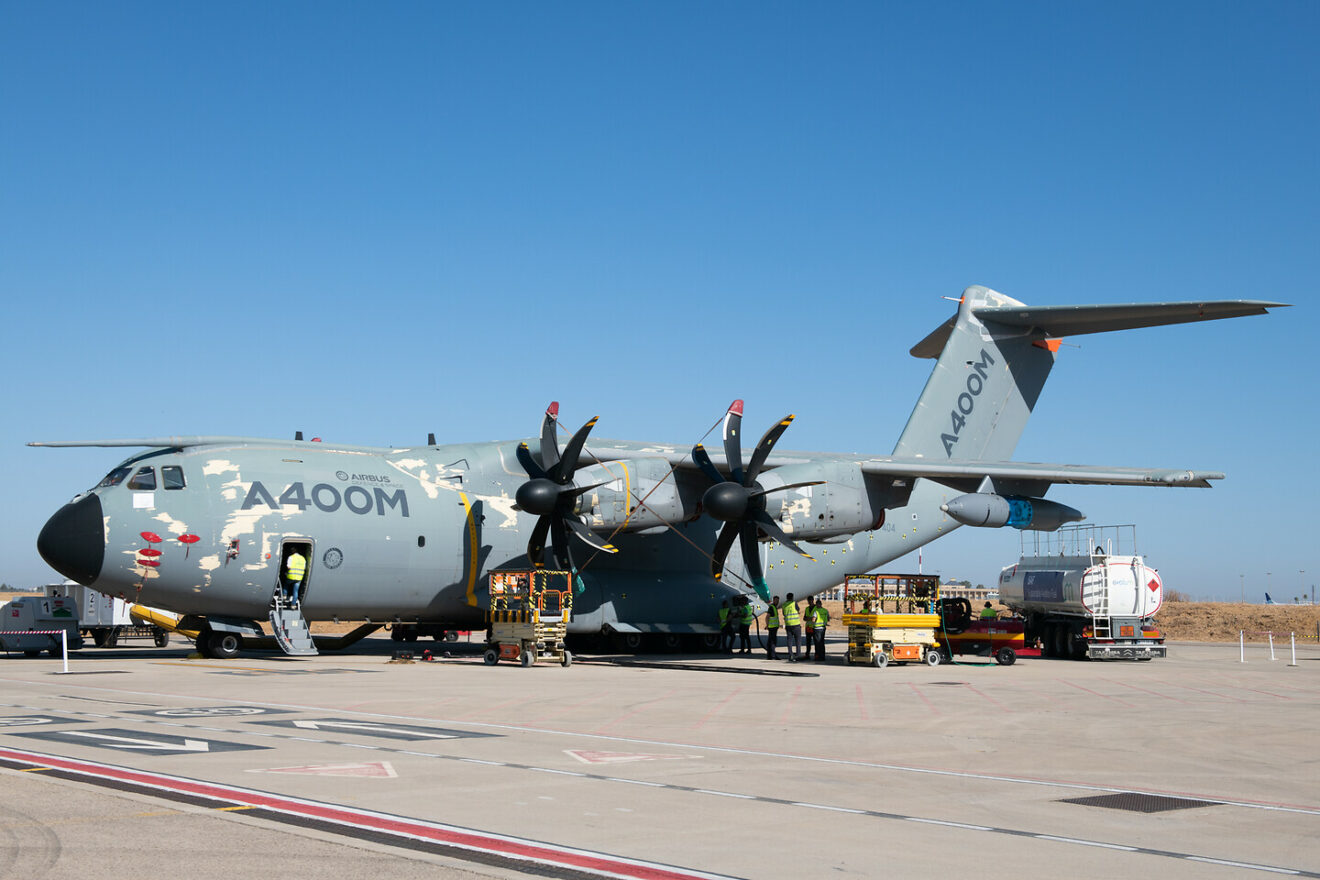 LONDON – This summer, the Airbus A400M programme team launched its first test flight of the A400M using sustainable aviation fuel (SAF). Using a 29% load of SAF in one engine proved a successful test, as Airbus moves one step closer to its target of helping keeping our skies clean.

Selected for this mission was MSN 4 (nicknamed Grizzly 4), a trusted aircraft that has been used for multiple types of tests since it reported for duty in December 2010. This flight was 994 on its service record and as such means it is only a mere 6 flights away from retirement.

As MSN 4 launched from the runway of a very hot of San Pablo, Seville plant, there was much excitement among the team with this being the first test flight utilising SAF.

Engine two was filled with a blended load of HEFA (Hydroprocessed Esters and Fatty Acids) that comprises of residual oils, vegetables and fats that is free from aromatics and sulphur.  This also means that is good for the engines as well as being very efficient.

Technical Lead for SAF in A400M, Ana Belen Blanco said: “It is a drop-in fuel, so there is no need to modify the engines´ systems and there are no technical limitations.” The use of the fuel was limited to just one engine at first to better enable analysis of the fuel systems behaviour whilst only feeding a single engine.

The test flight took over an hour in total, leaving the San Pablo runway and heading towards the North of Huelva and back to Seville allowed the team onboard to make some comparisons.

Cesar Gonzalez, Flight Test Engineer for Airbus Defence & Space said: “During the flight, we performed a close comparison between engine number 2, the one using SAF, and the other 3 engines using standard fuel Jet A1, so we had a very good opportunity to compare the performance of the different fuels.”

“SAF has been proven to reduce life cycle CO2 emissions by up to 85% when you compare it to conventional fuel, whilst also not compromising the TP400-D 6 engines or aircraft performance.”

“The results we got confirmed that using this blended SAF does not affect engines or aircraft performance, so the A400M can receive the whole potential of it in terms of environmental benefit,” Gonzalez said of the test flight.

Europrop International, who are responsible for the A400M’s engine design, development, manufacture and support have an agreed roadmap in partnership with Airbus to strive for a 100% SAF certification. This test flight is the first step towards such a goal.

“This flight is a significant step forward, and relying on the expertise of our parent companies, we are confident that TP400-D6 robust design will enable us to reach the highest SAF standards”, said Stephan Schlisske, Head of Design Organisation of Europrop International.

Over one hundred Airbus A400M aircraft are deployed across eight different countries, and the operators of the aircraft have conveyed a desire to use blended 50% certified SAF in their military operations, as such Airbus have responded to their needs. This successful test fight now means that these operators can fly using a load of up to 50% certified blended SAF.