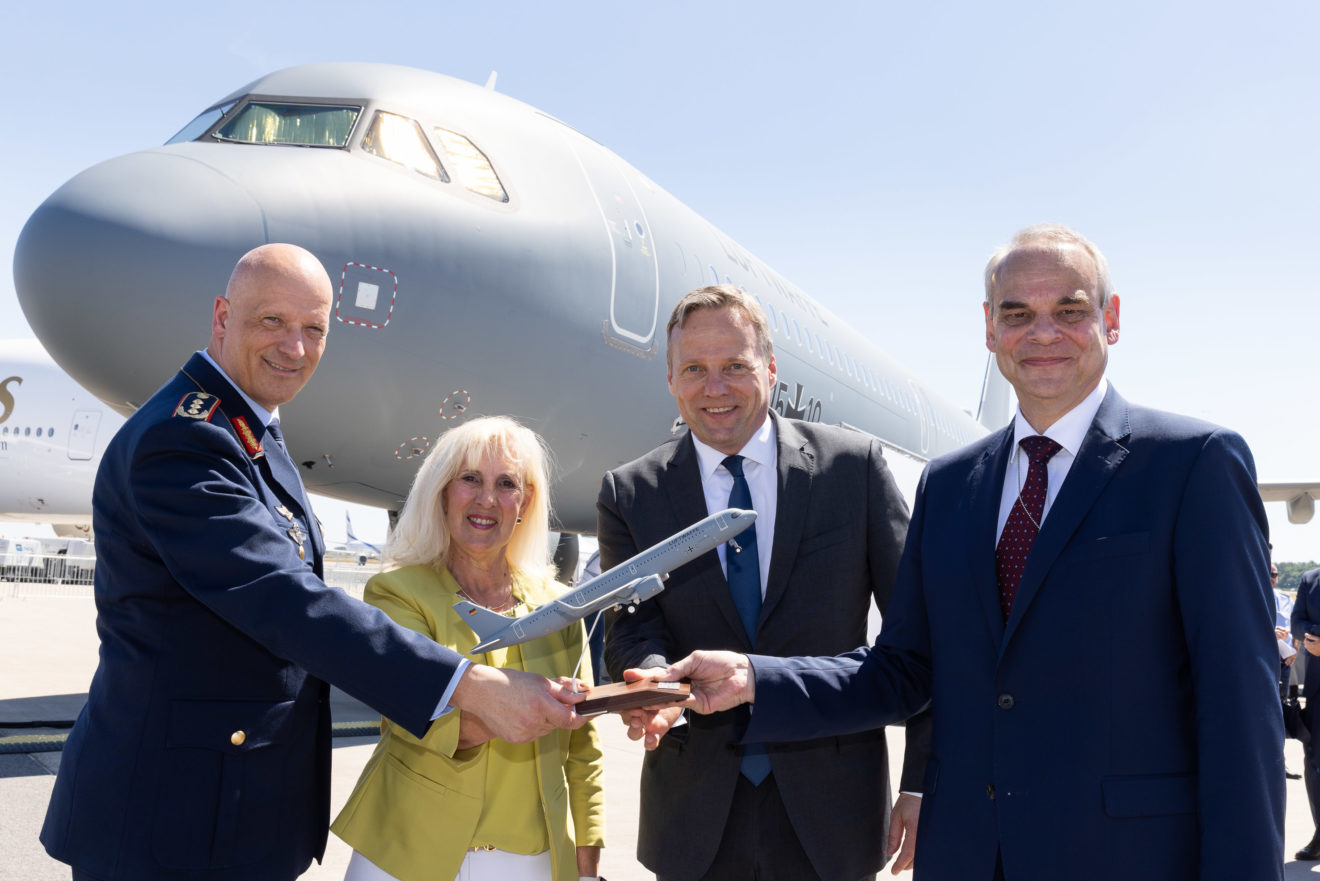 In the presence of Lufthansa Technik COO Soeren Stark and Airbus CEO Guillaume Faury, the State Secretary in the German Ministry of Defense, Benedikt Zimmer, and the German Air Chief, Lieutenant General Ingo Gerhartz, formally took delivery of the aircraft with the tactical registration 15+10.

The conversion of the aircraft at Lufthansa Technik’s base in Hamburg began last December. In the months that followed, it was initially modified for flexible troop and passenger transport. As well as parliamentary flight operations on short, medium and long-haul routes.

The maximum capacity in this configuration is 136 passengers.

I am delighted to take delivery of the first of two A321LRs here at ILA. Only two years have passed from the financing commitment to delivery of the aircraft. An example of how fast the procurement of available products can run. We want to build on these processes in the future. But of course, all this is also due to the team effort. I would like to thank those involved from the BMVg, the BAAINBw, the German Air Force. And of course the companies who worked together here in a spirit of trust

Modifications of the A321neo

As part of this initial modification phase, Lufthansa Technik has moreover already made numerous preparations for the so-called MedEvac role, which will expand the aircraft’s scope of operations to include capabilities for the qualified air transport of wounded, injured and diseased passengers.

This encompassed, for example, extensive pre-modifications such as an extended oxygen supply on board, which is absolutely necessary for the upcoming use as a “flying intensive care unit”.

The necessary supplemental type certificate, both civil and military, for the aircraft together with the associated New Generation Patient Transport Units (German: Patiententransporteinheit Neuer Generation, in short: PTE NG) is planned for mid-2023.

It will enable the transport of up to six intensive care patients or of up to twelve mildly or moderately ill/injured patients. Lufthansa Technik will deliver a total of twelve units and two reserve units of the PTE NG to GAF.

The handover of the first A321LR to the GAF is another milestone for us in a successful partnership. I am all the more pleased that we have once again succeeded in meeting the high demands of our customer. With a cabin precisely tailored to the needs of the German Air Force, our team has once again set standards. For this, my sincere thanks go to all involved

The handover at the ILA was preceded by an intensive test and acceptance program. Its been conducted by the Federal Office of Bundeswehr Equipment, Information Technology and In-Service Support (BAAINBw), the Bundeswehr Technical Center for Aircraft and Aeronautical Equipment (WTD 61) and the Special Air Mission Wing of the German Federal Ministry of Defense (Flugbereitschaft BMVg).

According to this, the aircraft, which currently is still on the civilian register, can now receive its official military certification. It will registered under the tactical registration 15+10.

At the same time, the first members of flight, cabin and technical crews of the German Air Force have already been extensively trained by Lufthansa Technik and Lufthansa Technical Training in handling the new A321LR.

The sister aircraft with the tactical registration 15+11 is expected to follow shortly.