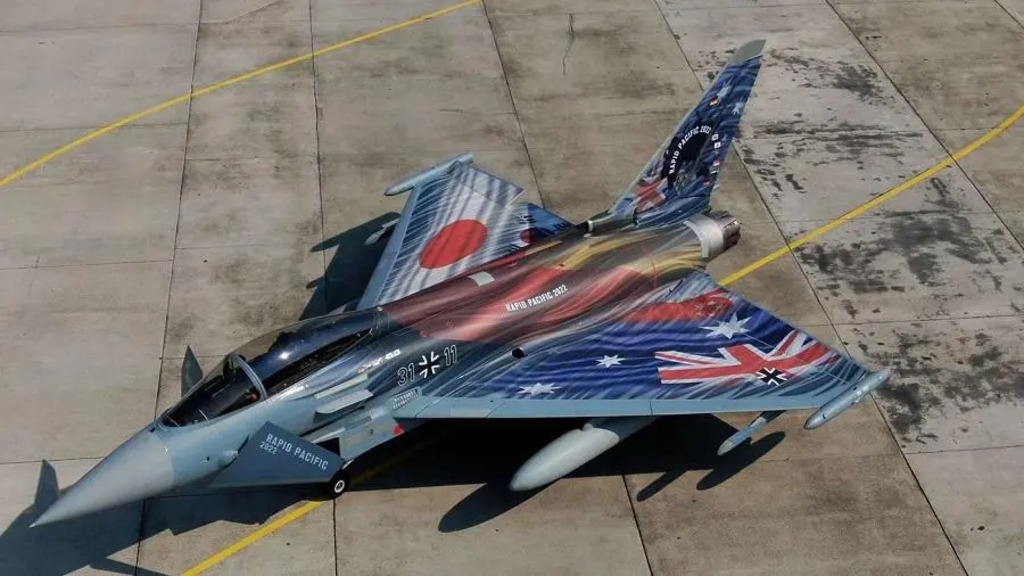 LONDON – The German Air Force, or Luftwaffe, has deployed a contingent of aircraft including 6 Eurofighter Typhoons to participate in Exercise Pitch Black 2022 – a multi-national simulated air combat exercise held biennially in Australia.

This marks the first time that the German Air Force will participate in the simulation exercises, which this year will see the Air Forces of 17 nations participating in Australia’s ‘Top End’ – the Northern Territory.

Currently en-route to Australia as part of the ‘Rapid Pacific’ deployment are six Luftwaffe Eurofighter Typhoon aircraft. The fighters are supported by three A330 Multi-Role Tankers and an A400M transport aircraft.

The German Air Force has posted updates on the progress of their Rapid Pacific deployment via their social media pages, which has included footage of an inflight refuelling enroute over the Mediterranean, and prior to their arrival in Singapore, where they landed yesterday.

From Singapore, the group will then transit to Darwin, the capital of the Australian Northern Territory.

Speaking ahead of exercise Pitch Black, which will run for three weeks from August 19 to September 8, Chief of the German Air Force Lieutenant General Ingo Gerhartz said, “This is the first time the German and Australian air forces have trained together.”

“The Indo-Pacific is of great importance to Germany. We share the same values with many partners in this region. Defending those values in case of a war emergency and being able to support our partners is something that needs to be practised.”

“The F-35 aircraft will further expand the broad spectrum of our capabilities. Since the Royal Australian Air Force is already flying this combat aircraft, we will be able to learn from them as well”

In another first for the multi-national training exercise, Australia will deploy it’s F-35A Lightning II fighter aircraft at Pitch Black 2022 for the first time.

The German government has recently procured the Lockheed F-35 aircraft to replace its aging Tornado fighter-bombers. Pitch Black will provide an opportunity for the German Air Force to fly up against the Australian F-35A’s.

About the Eurofighter Typhoon

Manufactured by a consortium of Airbus, BAE Systems and Leonardo, the Eurofighter Typhoon is the world’s most advanced multi-role combat aircraft providing simultaneously deployable Air-to-Air and Air-to-Surface capabilities.

The twin-engine, canard delta wing aircraft is highly agile and was originally conceived as an efficient air-to-air ‘dogfighter’. It is currently in service with 7 nations and has been ordered by two more. It has seen combat during operations in Libya, Iraq and Syria.

Upon completion of Exercise Pitch Black, the Luftwaffe will participate in Exercise Kakadu before transiting to Japan and the Republic of Korea. Chief of the German Air Force, Lieutenant General Gerhartz will also pilot a Eurofighter during Exercises Pitch Black and Kakadu.

Over 200 personnel of the German Air Force will be involved in the deployment group.

Further information can be found on the RAAF Exercise Pitch Black 2022 website.