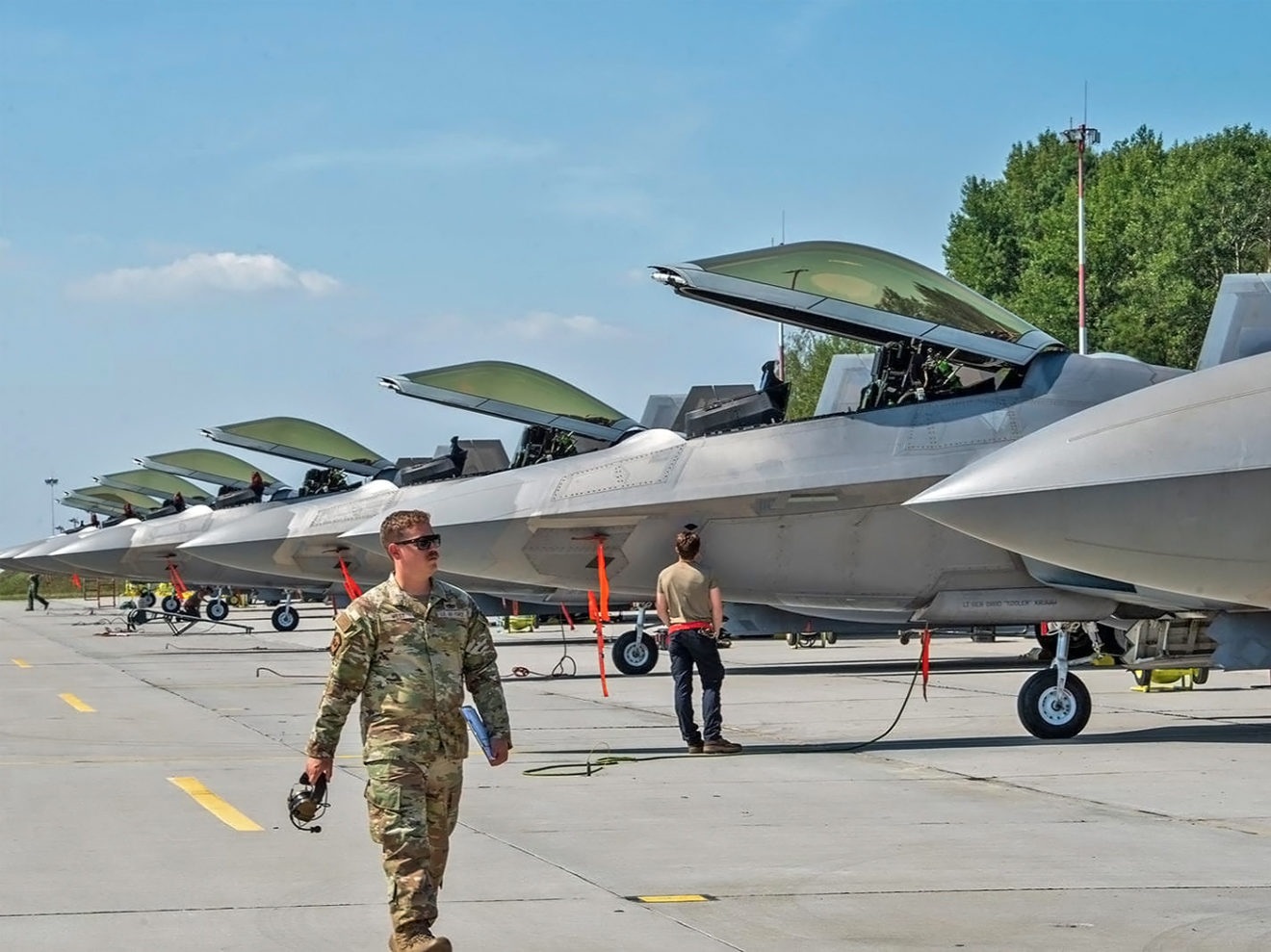 As part of NATO’s plan to bolster its collective defense posture, the 90th FS will take over the mission from the Vermont Air National Guard’s 158th Fighter Wing, which has been executing the coalition’s Air Policing mission since their arrival in theatre on May 2.

“This F-22 deployment will add significant capabilities to our support of NATO’s collective defense,” Hecker said. “The Raptors ability to perform both air-to-air and air-to-ground missions will exponentially increase the warfighting capability along the eastern flank as this rotation supports NATO’s Air Shielding.”

The Air Shielding mission is designed to increase the air and missile defense posture along the eastern flank of NATO’s alliance and is purely a defensive mission to shield and protect allied territory and populations and is a key component of NATO’s Deterrence and Defense posture.

Six F-15E Strike Eagles from the 48th Fighter Wing, Royal Air Force Lakenheath, United Kingdom, are being forward deployed to Łask Air Base, Poland, to temporarily support the U.S. contribution to the NATO Air Shielding mission. The F-22s will ultimately take over that mission.

“Our Airmen are well trained and ready to assist our NATO allies,” Hecker said. “Our Airmen’s ability to adapt, support and integrate with NATO’s Air Shielding mission shows our ability to respond to an ever-changing dynamic warfighting environment and strengthen the alliance.”

The Lockheed Martin F-22 Raptor is an American single-seat, twin-engine, all-weather stealth tactical fighter aircraft developed for the United States Air Force. As the result of the USAF’s Advanced Tactical Fighter (ATF) program, the aircraft was designed as an air superiority fighter, but also has ground attack, electronic warfare, and signals intelligence capabilities.

The prime contractor, Lockheed Martin, built most of the F-22’s airframe and weapons systems and conducted final assembly, while Boeing provided the wings, aft fuselage, avionics integration, and training systems.

The F-22 is a critical component of the Global Strike Task Force, and is designed to project air dominance, rapidly and at great distances to defeat threats. A combination of sensor capability, integrated avionics, situational awareness, and weapons provides first-kill opportunity against threats.

The 32nd Tactical Air Base in Łask performs an important function in the defense system of the Republic of Poland. It is a unit with new structures that meet NATO requirements. It functions as part of the 2nd Tactical Air Wing with its command in Poznan.

The base airfield was built in 1957. The current base unit, combining infrastructure and ground personnel, was formed in 2001.

The main task of the 32nd BLT is to improve capabilities in countering military and non-military crisis threats, including air terrorism, and to secure the training of the air squadron. As well as to secure the operations of allied troops.

It is one of the most modern units of the Polish Army. 32nd Air Base constantly participates in international exercises both in Europe and around the world. As one of two units in Poland, it is in possession of F-16 aircraft with excellent combat capabilities in air combat and the performance of specialized tasks.