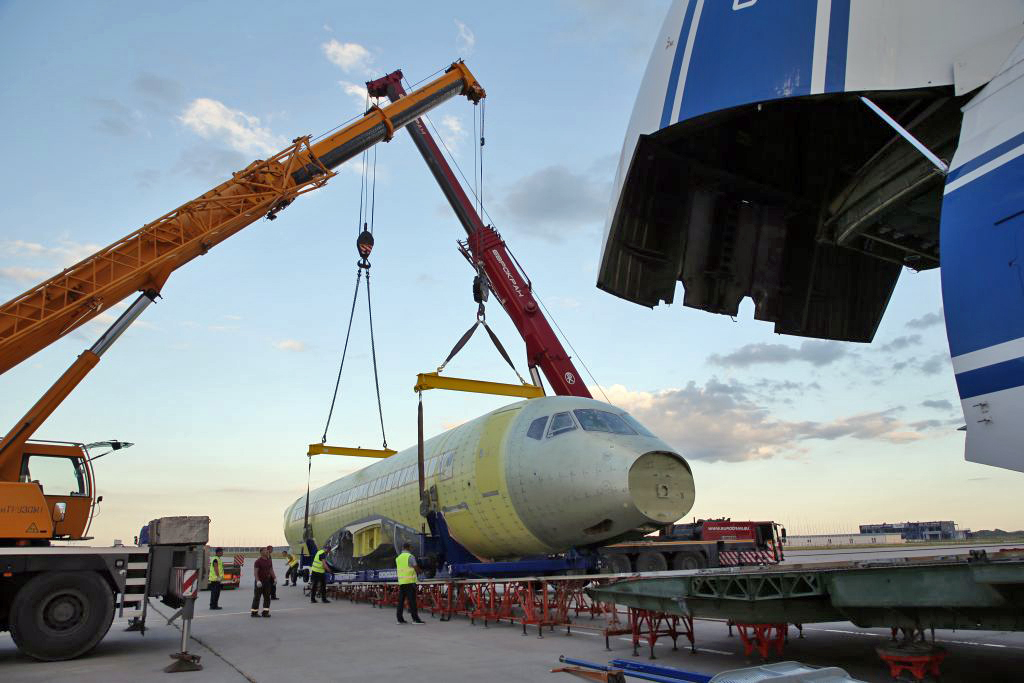 LONDON – The airframe of the Sukhoi Superjet SSJ-NEW aircraft was delivered for testing from the Irkut production centre in Komsomolsk-on-Amur to the airfield of the Gromov Flight Research Institute in Zhukovsky. The SSJ-NEW prototype will undergo a cycle of resource tests in the Central Aerohydrodynamic Institute (FAU TsAGI) Research Center named after Professor N.E. Zhukovsky.

In the near future, the SSJ-NEW fuselage will be delivered to the TsAGI laboratory, where specialists will perform the final assembly of the airframe: the joining of the wing, vertical and horizontal tail section with the fuselage and assembling of attachments. At the same time, employees of this centre will be carried out assembling systems test bench for the subsequent certification of the resource tests.

This is the second SSJ-NEW fuselage, which was manufactured at the Irkutsk Aircraft Manufacturing Center in Komsomolsk-on-Amur, and it was delivered to Zhukovsky to take part in the certified endurance tests. For our team, this event is notable because it was the first time the SSJ-NEW fuselage left the company. The previously assembled first fuselage is now in the final assembly shop and is being equipped with elements of imported systems and assemblies. In 2023 it will make its first flight and will take part in the program of certification flight tests. Successful completion of endurance and flight tests will allow us by the end of 2023 to certify the SSJ-NEW and begin mass production – said Andrey Boginsky CEO of Irkut Corporation and UAC Deputy Director General for Civil Aviation.

FAU TsAGI will subject the airframe and landing gear to repeated cyclic loading to experimentally justify the designed service life of 54,000 flight hours. In the course of tests, it is planned to obtain data on the fatigue strength and service life of the airframe, as well as to confirm that the design meets the requirements of aviation standards.

Such tests are common practice in the aircraft industry when significant changes are made to the airframe design. In case of SSJ-NEW such changes are conditioned by the generalization of the SSJ family aircraft operational experience on the domestic and international routes as well as by the necessity of integration of new aircraft systems, developed by the Russian enterprises.

The Sukhoi Superjet 100 or SSJ100 is a regional jet designed by the Russian aircraft company Sukhoi Civil Aircraft, a division of the United Aircraft Corporation (Irkut Corporation). With development starting in 2000, it made its maiden flight on 19 May 2008 and its first commercial flight on 21 April 2011 with Armavia.

The SSJ-NEW aircraft is being created under the program of import substitution of systems and components and will become another model in the family of currently operated SuperJet aircraft.