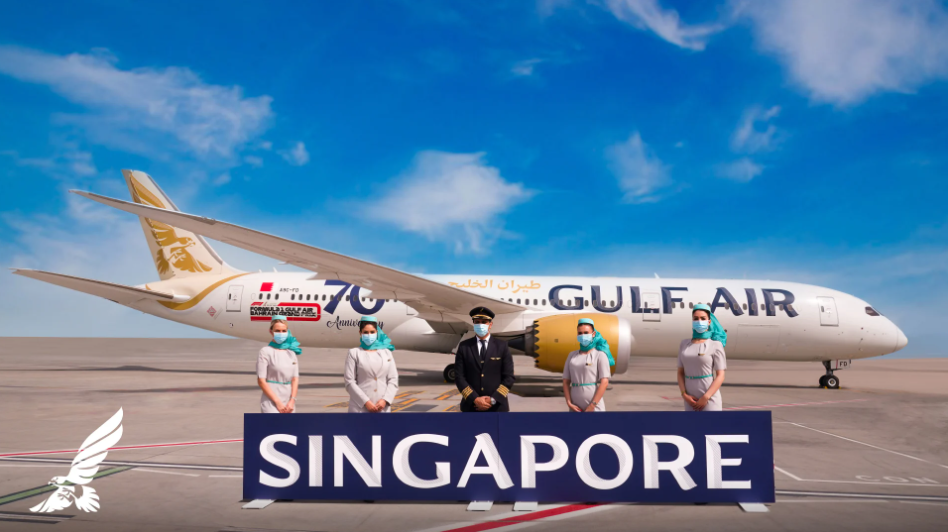 LONDON – Middle Eastern carrier Gulf Air, the national flag carrier of the Kingdom of Bahrain celebrated a new direct service to Singapore Changi Airport on April 4, with the airline’s flagship Boeing 787-9 Dreamliner. The fight which flew under flight number GF165 landed in Singapore at 1215 local time.

Fitted out in a dual-class configuration the aircraft offers customers 26 Falcon Gold seats and 256 economy seats, with all seats coming equipped with the latest comfort technology and in-flight entertainment systems, offering customers the quality of luxury no matter the class they are sitting in.

Gulf Air’s Acting Chief Executive Officer Captain Waleed Al-Alawi said: “We’re happy to land in Singapore and expand our network with direct flights connecting Bahrain and the Far East. This is a great opportunity for everyone to try our state-of-the-art Dreamliner and explore our latest boutique and premium leisure destination.”

The Boeing 787-9 Dreamliner registration A9C-FG is one of the carriers newest aircraft with an age of just one-year-old since it was delivered completed the flight in 7 hours 32 minutes travelling a total distance of 6,344 KM between the two destinations.

This is another big announcement for the Middle East and aviation as it is offering further connectivity from Singapore into that region of the world, and will definitely provide some competition amongst the other carriers going forward.