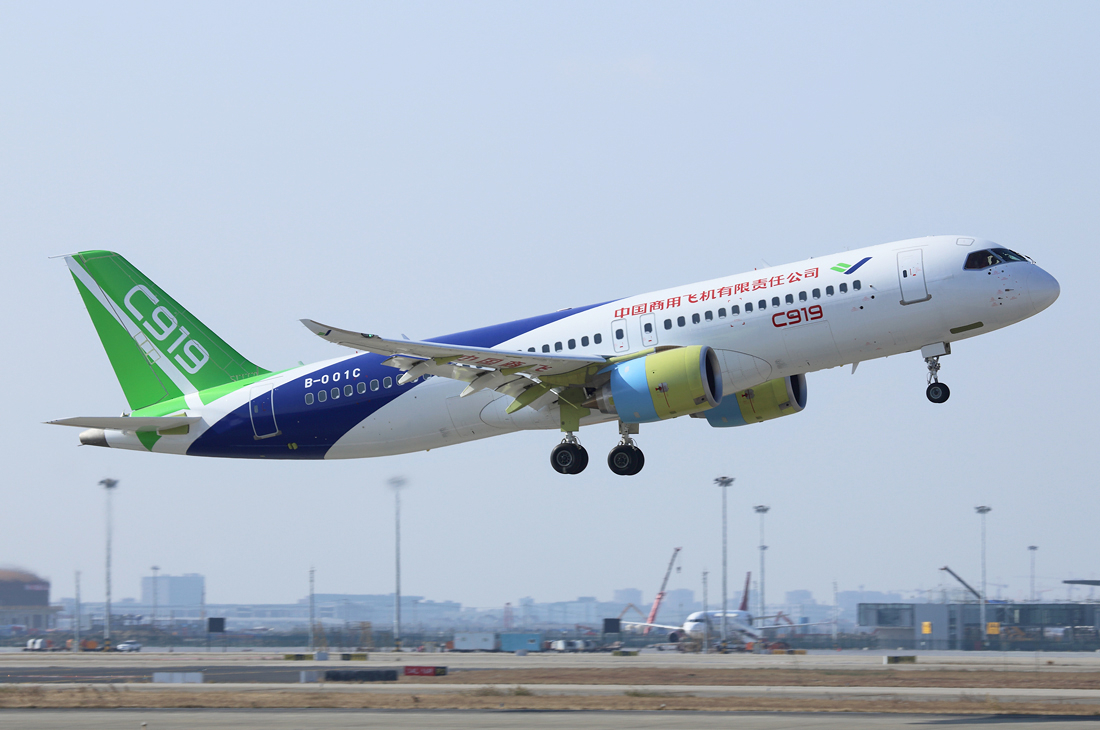 The Chinese-built aircraft, which is designed to challenge the dual monopoly by Airbus and Boeing, has completed all flight test missions with the test aircraft.

COMAC explained on its official accounts on social media that the six experimental aircrafts completed the testing tasks of the program, entering the final stage to obtain certification from the Civil Aviation Administration of China (CAAC) to start working on a commercial scale, a milestone in China’s ambitions to climb the manufacturing supply chain.

The C919 program is known to be designed to directly compete with the Boeing 737 MAX and Airbus 320neo, both narrow-body commercial planes, Chinese program faced a series of technical problems and tighter US export restrictions after it was introduced in 2008.

The Changjiang Daily newspaper, owned by the local government in Wuhan, said in a report published on July 8 that China Eastern Airlines is scheduled to receive the first batch of C919 aircraft this month. The state-owned airlines company placed an order for five COMAC C919s in March last year.

The narrow-body aircraft is assembled in China and relies heavily on Western components including engines and avionics.

Since the beginning of July 2022, the three largest state-owned airlines in China have concluded the largest order for airlines in the country since the outbreak of the Covid-19 pandemic, by announcing the purchase of about 300 Airbus aircraft.

Air China and China Southern Airlines, in separate disclosures filed to the Shanghai and Shenzhen stock exchanges, announced that they would each buy 96 A320neo aircrafts worth of $12.2 billion at list prices.

China Eastern Airlines also stated that it will buy 100 aircraft of the same type, worth of $12.8 billion. Deliveries are expected to begin in 2023 and continue until 2027, with the bulk delivered in 2024.

The aviation sector in China has recorded a recovery in recent months, from the blow it suffered after the authorities closed the huge city of Shanghai last April due to the new wave of the pandemic.

China has worked for years to produce efficient aircraft engines, however, the most reliable estimates of the country’s main scientific research institution, indicate that China is still stumbling in achieving its goal, and that its reliance on Russian systems has not achieved its promises.

In 2019, Chinese President Xi Jinping and his Russian counterpart Vladimir Putin agreed to expand their technological cooperation, the two leaders stressed that China-Russia relations have entered a new era of comprehensive and strategic partnership, through a number of initiatives to establish research centers and promote academic exchange.

Certainly, one of the most prominent aspects of cooperation between the two countries revolved around the development of a wide-body passenger aircraft, the success of which was likely to lead to qualitative changes in the international aviation industry, with the emergence of a real and serious competitor to Boeing and Airbus.

However, the two countries found that the plane would need to rely on foreign suppliers for its engine, because neither Russia nor China was able to build this engine.

With Russia’s War in Ukraine and international sanctions imposed on Russia by the United States and its allies, the Russian-Chinese attempt to build a giant passenger plane has often failed or will be delayed for years to see the light.

This deals a painful blow to the idea of ​​China’s autonomy in one of the most prominent technical fields – aviation. Despite this, China cannot be knocked out of international competition in this field in the long run.

Once the COMAC C919 enters service, although it cannot compete with the Boeing 737 MAX and Airbus A320neo in international markets, it is an essential part of Beijing’s plans to increase the country’s advanced manufacturing in the next five years, all major Chinese government-owned airlines will fly.

Especially as the past two decades have proven China’s ability to join many Western high-tech industries such as automobiles, trains and digital technology.

In the middle of last year, the United States and the European Union agreed to end their 17-year trade dispute over aircrafts, and the two sides agreed to stop providing development incentives, which could harm the other side.

The background of this agreement is the desire of the two sides to present a united front against China, because the agreement calls for joint action against third-party anti-market practices, which includes China calling on foreign investors to benefit from its low-cost aviation technology that harms Boeing and Airbus.

But there are those who believe there is a lot of exaggeration about the strength of the Chinese aviation industry, that this industry still depends in essence on Western technologies, and that the US and the EU can eliminate the Chinese aviation industry, but they do not want to, at least for the time being, because doing so means colliding with China.

Both Boeing and Airbus salivate for Chinese markets, as the demand for aviation in the Asia-Pacific region is expected to expand at twice the rate in the West, therefore, American and European companies have a lot to lose from direct confrontation with China.

This is especially so now, as the US and Europe are concentrating their efforts to break the Russian economy. This is evident from the fact that the US Department of Defense has blacklisted Chinese COMAC partners for its military activities.

But they have completely avoided dealing a blow to China’s commercial aviation industry, and the sanctions imposed on Russia have dealt a severe blow to China’s aircraft ambitions and its proud COMAC C919 aircraft which is essentially a Western plane.

The role of the Chinese company is actually limited to assembling the plane’s fuselage and wings, which is a minor role representing only 25 percent of the costs.

The avionics used are manufactured by American companies such as Honeywell, Collins Aerospace, and other European companies, and the aircraft’s engine, which is the most difficult part, is the product of a joint venture between the American General Electric and the French company Safran, which manufactures aviation and missile engines.

Moreover, China’s commercial aviation industry may need more time to compete with its Western counterparts Boeing and Airbus. The C919 is inferior to the A320neo and 737 MAX, has more fuel consumption, has less range, and has no international support network. Make it marketable outside of China.

However, the weaknesses in the Chinese plane do not negate the fact that Beijing is trying to pressure Boeing and Airbus indirectly. China’s orders for planes from Boeing and Airbus is very low, compared to the number it will need in the coming years.

This means that it sends a message to the US and the EU, that it will rely on its domestic production even if it is more expensive.

Some experts point out that it is only a matter of time until competition intensifies between Boeing and Airbus on the one hand and COMAC on the other hand in the field of civil aviation, even if it is US and European sanctions against Russia have hindered China from accelerating the development of its aviation industry.