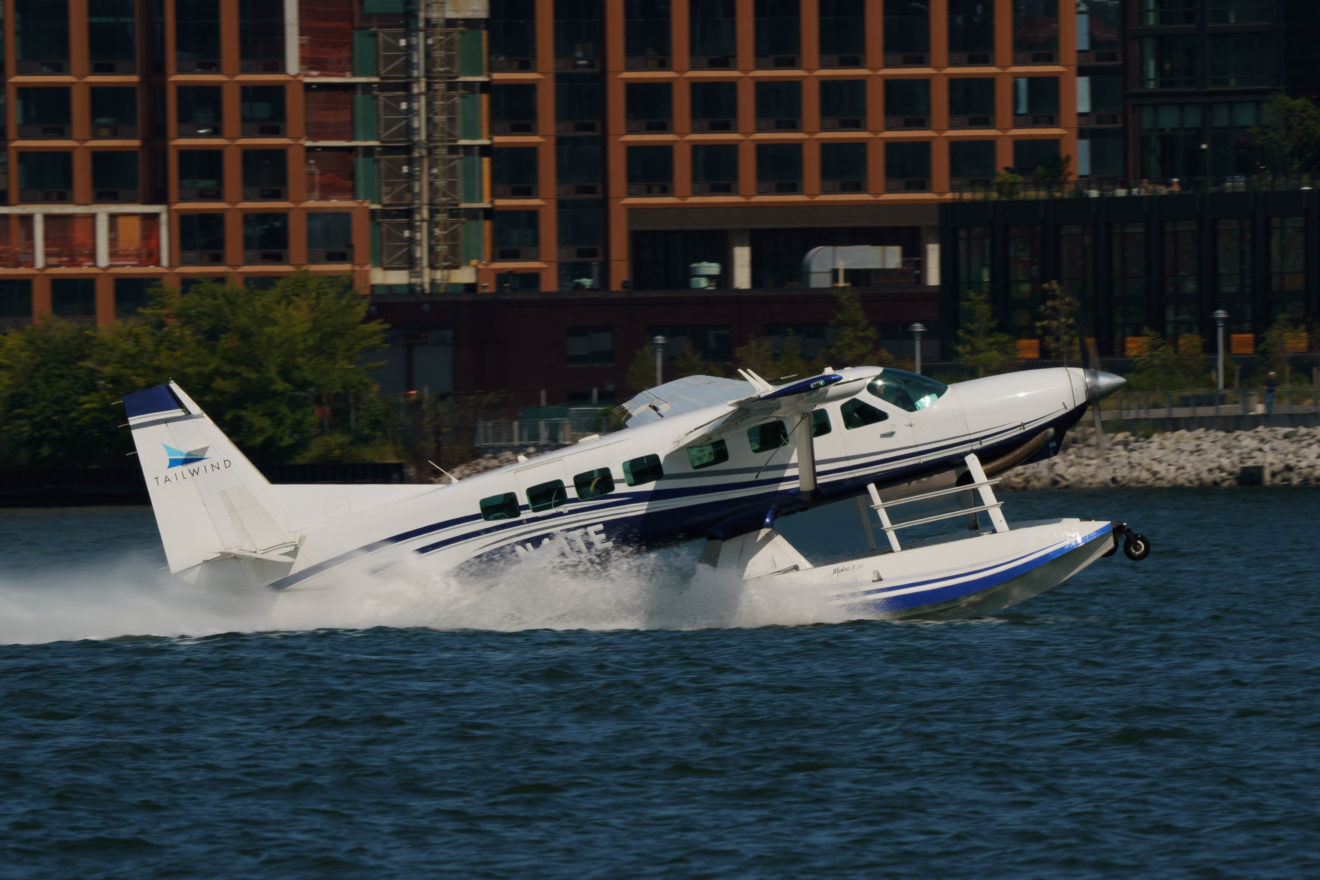 NEW YORK – AviationSource was invited to experience Tailwind Air’s flagship service between New York and Boston. The flight has been described by some as “the new Concorde”.

Tailwind Air operate a fleet of Cessna Caravan 208B EX Amphibian on their water routes.

Their route network serves eight destinations from New York, including Boston harbor which we will be traveling on in this report.

New York Skyports Seaplane Base is easy to get to from the NYC Ferry service.

I arrived early for my flight. Unfortunately, an email notification the previous day was filtered by my email provider, so I didn’t see it until I arrived at the seaplane base. I had booked to be on these flights the previous day, however, these were cancelled due to operational reasons.

When the flights were cancelled, I received an SMS. I feel it would have been a better customer experience to send an SMS and email for a delay with 12+hrs notice, but it wasn’t a disaster.

I was early enough that the lounge was unlocked, but no staff were present in the room. It transpired they were in a backroom getting ready for the day. I hadn’t appreciated I had actually arrived in the lounge before it opened, despite no opening hours being displayed.

I was disappointed to see the state of the lounge. Some of the fixtures were broken, and the room seems in need of a fresh coat of paint. It was also rather dark, despite being a cloudless day outside.

There was a small fridge with various soft drinks. For the price of a ticket, I’d expect a lounge that looked well maintained at a minimum.

The check in process was easy, with the staff member checking my ID, and weighing my bag. Once this was complete, it was then just a matter of awaiting our aircraft’s arrival. The staff member was extremely friendly, and chatted with all her customers whilst we awaited the aircraft.

Boarding was a simple affair, simply walking down the dockside to the aircraft. We dropped our bags at the door for the crew to load them in the back, and climbed aboard. Given the aircraft was acting as a boat, it was naturally unstable. However, our flight crew were on hand to assist all passengers getting on safely.

Within five minutes of boarding, our Captain entered the flight deck and commenced the start-up process.

The First Officer handles untying the aircraft from the dock whilst the Captain starts up. From the back of the aircraft, he gave a standard safety briefing, before walking through the aircraft and jumping into the righthand seat.

We were quickly headed into the middle of the East River. After letting another Caravan land, we were quickly airborne with a great view of Manhattan.

During our initial climb-out, we were also treated with great view of LaGuardia airport, flying directly overhead.

Once clear of the New York area, we started a slow climb to our eventual cruising altitude of 9500ft. It is worth noting at this point the flight was being conducted VFR, hence the altitude ending in 500ft.

Climb out was reasonably bumpy due to thermal activity. About half way through our climb, the bumps went away. One downside to flying in these smaller aircraft is they’re more susceptible to turbulence.

During the flight, the pilots understandably kept themselves to themselves, doing their job. However, they did ask the passengers if the temperature of the air conditioning system was good for everyone. This gesture was appreciated by everyone.

We were only at our cruising altitude for a few minutes, at which point we commenced our decent for Boston. Our climb and descent rates during most of the flight never passed more than around 300ft per minute. If I hadn’t been watching the flight displays, it would have not been clear that we stopped climbing or stopped descending.

Landing in a floatplane is a rather unique experience. The routing into Boston harbour takes you over the main port, with a turn to final over the port into the harbour.

After dodging the boats and landing the river, we moored up on a pontoon. Unlike New York, after arrival we were transferred to a boat, which took us to dry land.

After leaving our boat, there was nothing left to do, I was therefore able to leave to start exploring Boston immediately.

I returned to the Seaplane Base around 20 minutes before the flight. There is an extremely small lounge at Boston, which was in much better condition than the one in New York. The smaller size doesn’t matter though, as the dock area where Tailwind Air operate from is a great place to sit outside. Once again, drinks were available in a small fridge. Check in was just as easy as New York.

Around 10 minutes before departure, the boat arrived to take us to the pontoon and our aircraft. Like in New York, the Tailwind crew were on hand to help us off the boat and onto our aircraft.

The aircraft features eight seats, in a 1 – 1 configuration. Rows two and three face each other, with rows one and four facing forward.

The pre-departure experience was unsurprisingly identical, given we had the same great crew.

The flight was identical to the outbound flight, once again the shallow climbs and descents were good for passenger comfort. We cruised at 6500ft, which was still high enough to be above the turbulence.

One concern I had with the flight was how loud it would be. I was pleasantly surprised to experience a noise level that was not dissimilar to the Boeing 767 I flew to the USA on. For reference, on that flight I was sat approximately abeam the engine exhaust.

After landing into New York, we went back to the same dock we left from. Once again, the Tailwind Air crew were there to help us on the wet, and slightly unstable platform.

Our bags were bought to us within a few minutes, on stable land rather than the floating area. At this point, the trip was complete.

Prices start at $395 each way on this route, so it is far from the budget option. So how worthwhile it is depends how much you value your time.

I’d certainly have no issue flying Tailwind again. Their recently announced expansion to Washington D.C. will be worthwhile I believe.

Overall, I thought the Tailwind Air experience is great for a certain audience. If you’re someone having meetings in New York, then two hours later having other meetings in Boston, it’s perfect. I therefore feel calling their flights “the new Concorde” is an accurate description.