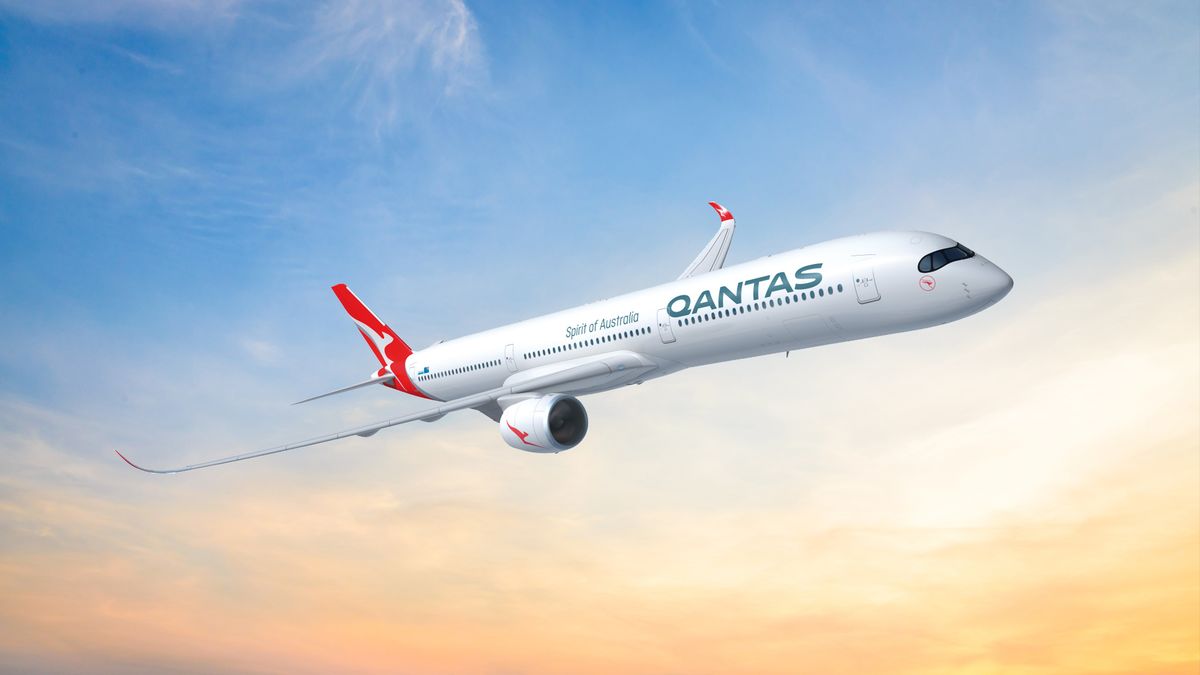 LONDON – Australian carrier Qantas has today unveiled a blockbuster order for 100 Airbus aircraft as well as concluding its pick for Project Sunrise.

Airbus have sent F-WMIL, its testbed Airbus A350-1000 aircraft which has had a Qantas logo painted onto it, to Sydney via a transit in Perth from Toulouse.

The manufacturer also sent a brand new airBaltic A220 to the airport as well. Whilst this makes no sense, here is why it actually does.

This order will be the largest ever placed by the Australian carrier in its 103 years of operation.

The order is for 52 firm orders and up to 106 options. The firm order consists of the following setup:

For the 106 options, this is going to be spread amongst the three aircraft types that Qantas has placed firm orders.

It is understood that deliveries will take place over the next 10 years and could include other variations of the aircraft types ordered too.

The carrier announced the following in their trading update:

“Domestically, Qantas will take delivery of 20 Airbus A321XLRs from FY25 and 20 A220s from FY24. This order also includes 94 purchase order rights as the airline’s existing 737s and 717s are gradually retired over the next decade.”

“Internationally, Qantas will order 12 Airbus A350-1000s to operate Project Sunrise – the long-held plan for non-stop flights from Australia to destinations including London and New York from FY26, starting in Sydney.”

“This builds on the success of existing direct long-haul services, demand for which has increased post-COVID.”

“Jetstar is on track to take delivery of 18 Airbus A321LRs from July 2022. In addition, 20 of Jetstar’s existing A320neo orders will be converted to A321XLRs for delivery from the second half of calendar 2024.”

“Qantas expects to take delivery of its three remaining Boeing 787-9s in the second half of FY23. Two of Qantas’ Airbus A380s have returned to service with a total of six reactivated by the first half of FY23”.

The Verdict on this Order…

We await the comment from Airbus’ sales chief, Christian Scherer, on this blockbuster order.

However, commenting on this blockbuster deal so far was Qantas’ CEO Alan Joyce, who said:

“Our strategy has been to restructure the business so we could survive the pandemic and then recover quickly when travel normalised. That’s why reducing cost was absolutely crucial.

“We’re seeing the benefits of that strategy now and it gives us the confidence to make the long-term investment decisions that are key to future growth and shareholder value.

“The major fleet decisions we’ve announced today are a huge vote of confidence in the future of the national carrier, and will deliver for our people, customers and shareholders.”

With Project Sunrise now being placed in full motion after a plethora of delays caused by COVID, Qantas has selected the A350-1000 (A35K) for the ultra-long-haul operations from Australia.

Direct flights to the likes of London & New York will take place from Sydney and Melbourne, which is going to add to the carrier’s ultra-long-haul route network it has already.

The A35Ks will no doubt join the Boeing 787-9 Dreamliner aircraft that have been operating such flights like this in the meantime, or they could very well be deployed on other routes to make way for the new Airbus aircraft.

It will be interesting to see what configurations these aircraft will be installed with, and whether the A35K would offer better capacity than the Dreamliners already servicing the routes.

Deliveries of the A35Ks mean that direct flights of 20 hours and over can be achieved as early as 2025.

This order will of course be not great news for Boeing, as it now means they have officially lost the fight on securing the Project Sunrise contracts.

With the completion of the 777X now delayed until 2024/25, it was a clear decision for the Australian carrier to make when it came to what aircraft it was ordering.

It led to two options, with Qantas picking the latter:

So it remains clear that this is another fly in the ointment for Boeing, particularly on the 777X and 787 programs respectively.

Entering the A321XLR into its fleet means it can open itself up to routes not requiring large runways to land on.

With a significant distance offering of over 4,500 nautical miles, the A321XLR is going to open up new markets for Qantas to access from Australian airports such as:

This is a good move for Qantas, especially with the carrier becoming the first in the country to order this variation of the A321 Family.

It will be interesting to see what routes the A321XLRs will operate on, as this will give an indication of what the airline aims to do internationally as we progress through this decade.

The A220 side of the order will go a long way in starting up its strategy of domestic fleet renewal, particularly on its fleet of older aircraft in the fleet.

With significant range offerings also, there can of course be some cross-country flights that will suit very well to the A220 with Qantas.

Whilst the order is for -300s, there is also the possibility that -100s could be exercised for the shorter flights as well, meaning there is enhanced flexibility for Qantas in this respect.

Again, it will be interesting to see where the carrier chooses to utilize this aircraft, and whether it could result in new routes or bolstering up existing routes.

This order represents another major milestone for Airbus, as it continues on its work to hinder Boeing’s sales performance moving forward.

Such an order like this is normally announced at an air show, which will give enhanced confidence that Airbus probably have some more orders up their sleeve throughout this year.

It is also good news that Project Sunrise can now move into full swing, and by 2025-26, we will see direct non-stop flights into Europe from Sydney, which will mark another marvel in aviation engineering.

For Qantas, they seem to be getting back on track, and have clear and significant plans throughout the rest of this decade.