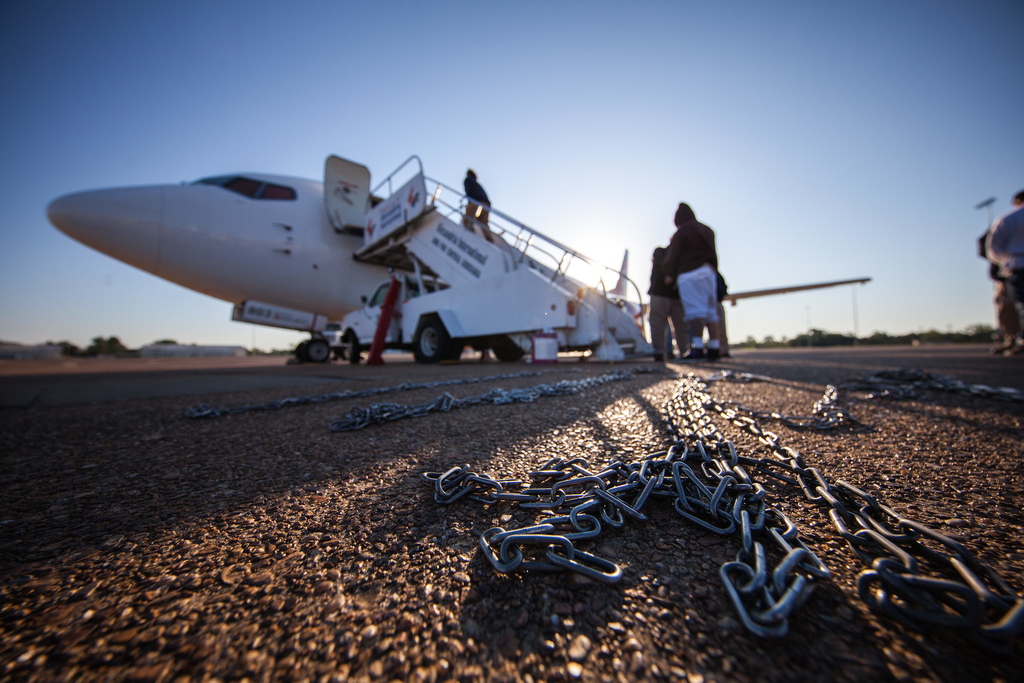 LONDON – This week’s news of what could potentially become the first of many UK deportation flights to Rwanda has stoked the coals of protests surrounding what has been characterized by the Archbishop of Canterbury as “immoral and bringing shame on our nation”.

Whilst the human rights issues surrounding these deportation flights are clearly apparent, from an aviation perspective, there is a further element to the carriage of large numbers of detainees by air that has been given much less consideration – the element of air safety.

Why would a deportation flight be riskier than a general commercial flight?

Firstly, let’s be very clear that the air safety concerns we raise here do not come from the transportees themselves – rather it is the method in which they are being transported by countries that participate in mass air deportations.

Whilst it is unclear at the time of writing exactly what in-flight security procedures are to be adopted by the UK government, the experiences of other nations like the US and Australia have shown that such flights are typically flown with significant numbers of passengers in restraints – handcuffs, and in some cases body belts and leg shackles.

The governments of the UK, US, and Australia have all been criticized by oversight bodies for excessive risk assessments resulting in large numbers of detainees being placed in restraints for transport.

Just how many of the detainee cohort on Rwanda deportation flights will be placed in restraints during the flight is unclear – the UK Home Office was contacted for comment but declined to respond.

A large number of passengers with restricted mobility due to the fact that they have been placed, rightly or wrongly, in mechanical restraints – heavy handcuffs are a recipe for potential disaster in an aircraft accident.

The critical takeoff and landing phases

If you’ve ever wondered where the most accidents and the most fatalities occur in commercial aviation, the answer is perhaps unsurprising – the takeoff and landing phases are the most critical.

A Boeing analysis of global commercial flights from 2007 to 2016 found that 48% of all fatal accidents occurred during a flight’s final descent and landing phase.

That’s a rather high number when you consider that the final approach and landing account for just 4% of an aircraft’s total journey.

The takeoff and initial climb phase is the second critical part of a flight, accounting for a 13% percent of fatal accidents.

So really, it’s those first and last few minutes of a flight that are the most dangerous.

The “Plus Three Minus Eight” rule

There is a rule of thumb in aviation safety that the first three minutes of any flight and the last eight minutes are the most critical. Simple reason – the majority of air accidents occur during these flight phases.

Accident survivability in these stages of flight — takeoff, initial climb, final approach, and landing — is known as the “Plus Three Minus Eight” rule.

Ben Sherwood, the author of ‘The Survivors Club — The Secrets and Science That Could Save Your Life’, estimated that 80 percent of all plane crashes happen within the first three minutes of a flight or in the last eight minutes before landing.

The relevance to deportation flights

Let’s examine the criticality of the take-off and landing phases in the context of a deportation flight with a number of passengers on board in mechanical restraints – either handcuffs, body belts, or leg shackles.

When an accident happens in one of these critical phases, a key issue is a fact that such accidents provide passengers with little or no warning. With the aircraft close to the ground, maneuvering time is minimal.

In a worst-case scenario, passengers may only be given the “Brace, brace!” warning by the crew.

So first up – let’s take a look at that all-important brace position, and how a person in handcuffs negotiates it.

The Australian scenario is quite severe. As many as 30 detainees may be seated through the cabin wearing solid-hinged manacles (see photo below), which restrain the wearer from moving his/her hands inwards.

The ICAO recommended brace positions are as follows:

Imagine yourself in the handcuffs pictured above. If you do manage to get your hands into the recommended brace position behind your head, you now have that nicely sharp row of metal ratchet teeth directly behind your scalp.

The standard procedure in impending crash scenarios is actually to have passengers REMOVE sharp objects from their person (not stick them against the back of their skull), to prevent puncture injuries and blunt force trauma.

A person in handcuffs is actually far more likely to reflexively place themselves in all the WRONG positions, due to their restricted range of movement.

You can think of a severe movement impaired detainee as having a temporary physical handicap. Airlines actually have requirements to account for handicapped passengers’ safety (think of wheelchair-bound and elderly passengers etc).

Not so with a flight of deportees.

From observers on US ICE Air flights and Australian detainee transfer flights, it is reported that the cabin crew provides standard passenger briefings and generic briefing cards. They don’t explain how a person with severely restricted movement will negotiate the brace position, or which position they should adopt.

Or for that matter, explain how a passenger in heavy restraints can put on a lifejacket. (FACT: It’s impossible). Or quickly don an oxygen mask. Or reach an emergency exit quickly amongst a throng of other similarly restricted passengers.

They also don’t take into account the fact that many detainees speak English as a second language and are likely experiencing trauma in their situation.

Basic psychology tells us that a person under this level of personal threat has limited spatial awareness and their capacity to react quickly becomes impaired. Furthermore, studies have shown that a person placed in handcuffs becomes mentally submissive. It breaks many peoples’ will.

The ICAO international standard for evacuating an aircraft in the event of a fire is ninety seconds. But is it possible to evacuate a cabin full of restrained passengers in a minute and a half?

If you consider past instances where restrained detainees have had to be mass evacuated in an emergency, the answer to that question is “No”.

In 2014, a US ICE Air deportation flight carried out by former operator Falcon Air was forced to mass evacuate the aircraft on landing after the cabin filled with smoke. It took seven minutes to evacuate the 115 shackled detainee passengers.

An incident involving a fuel spill in 2017 forced another US operator, World Air to evacuate 132 detainees from the aircraft. It took two and a half minutes.

Are we beginning to see the potential air safety risks with mass deportation flights?

The excessive use of restraints

In the US it is standard practice for ICE Air detainees to be transported by air in leg shackles and wrists attached to body chains. (See photo below).

Similarly, in Australia, over 70% of immigration detainees are forced to wear heavy manacles continuously for flights which often last up to 12-14 hours. Home Affairs has drawn criticism for its unjustifiable excessive use of such restraints during transport.

The UK Home Office has been similarly criticized in the past for excessive use of waist restraint belts on deportation flights, which inspectors described in 2015 as “almost equivalent …to the most extreme and very rarely used” restraint equipment in prisons.

The decision to use restraints on immigration detainees transported by air is generally made at the discretion of the air operator and the organization responsible for escort.

The justification for excessive use of restraint equipment becomes questionable.

The UK Home Office was contacted for comment on any proposed use of mechanical restraints on board yesterday’s Rwanda flight. They declined to comment.