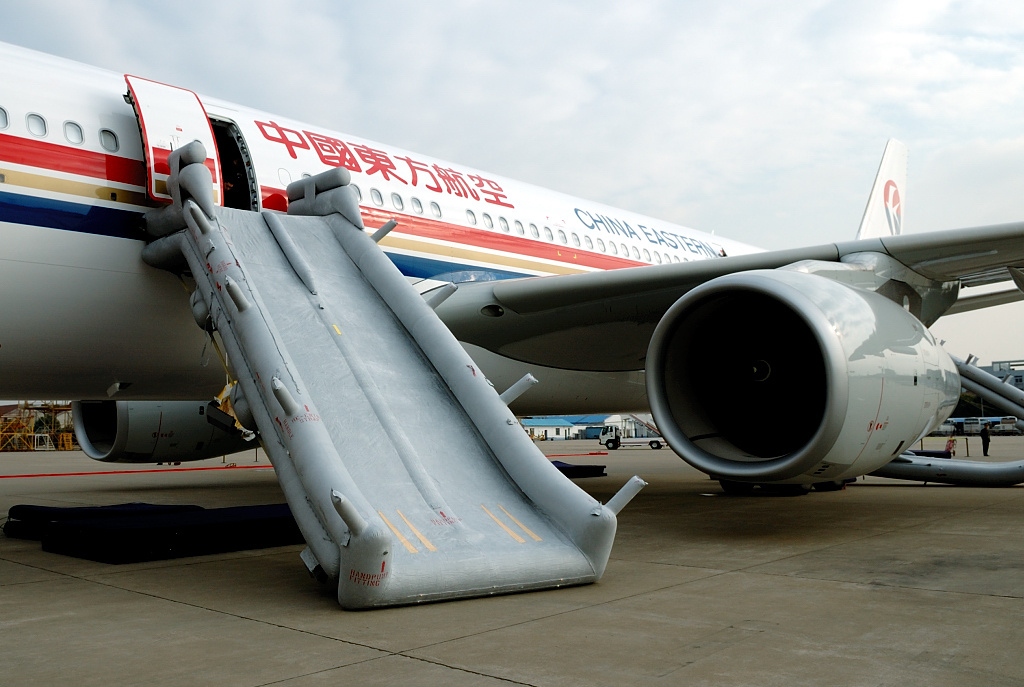 LONDON – This week’s events saw a gear collapse and runway excursion accident in Miami, involving an MD-82 aircraft operated as RED Air flight 203. A post-crash fire occurred after the cabin was evacuated.

There were 130 passengers and 10 crewmembers on board, and several injuries were reported.

AviationSource Chief Editor James Field’s follow-up report was significant. It described how many of the passengers had taken cabin luggage with then as they evacuated the aircraft via escape slides.

This recent incident also coincided with the release of a safety report on a 2109 incident involving a Qantas Airbus A330-200 with 200 passengers on board.

The aircraft was forced to return following a hydraulic leak shortly after take-off. Passengers were evacuated via the aerobridge and escape slides.

One passenger was severely injured on the slide, with 5 others suffering minor cuts and abrasions. What was telling was the large number of passengers that took hand luggage with them on the slides.

A safety investigation by the ATSB found that Qantas cabin crew didn’t practice phrases like “leave everything behind” and “jump and slide” in their passenger briefings.

One recurring issue that draws attention following an emergency evacuation is the tendency for many passengers to retrieve their cabin baggage before evacuating the aircraft, even in cases where they are briefed not to.

These actions can cause delays, block access to exits, cause further congestion in the aisles, and also potentially damage escape slides.

So why does it keep happening?

For many of us aviation buffs, air travel on commercial airliners is a commonplace event (global pandemics notwithstanding!)

Planespotters and Av Geeks develop a familiarity with each aircraft variant as they are put into service with world airlines. Many travel routinely, either for business or pleasure, on a wide range of aircraft types.

But ask yourself this question – as a passenger, just how familiar are you with the emergency procedures pertinent to the type of aircraft you’re travelling on?

Because emergency events are so unlikely and so isolated, we all tend to develop a psychological mindset that they just won’t happen.

As a former commercial pilot, I tend to glance around the cabin when the flight attendants go through the pre-takeoff safety briefing. You know the one – “seatbelts…emergency exits here, here and here…lifejacket under the seat…light here, whistle there.”

But what if I stopped the briefing, and asked those passengers torepeat to me where the closest exit to their seat is? Or which way they should head in the event of a sudden evacuation?

I can tell you that precious few actually know.

The take-off and landing phases

Let’s put things into perspective – the risk of being in a serious air accident is very low. For those who want statistics, the NTSB put the odds of being in an aircraft crash at roughly 1 in 11 million based on passenger movements. And the chances of survivability are good at 95%.

For those that find themselves in an accident or an incident, the odds are high that it will occur in either the take-off or landing phase.

A previous AviationSource analysis article explains this further. Almost 80% of incidents occurring during these critical phases – critical because the aircraft is “low and slow”. As a pilot, this means there is little time or safe altitude in which to react.

For a passenger, it means an accident may likely occur with very little forewarning.

Following a 2005 runway overrun occurrence at Toronto Lester B. Pearson International Airport, Canadian Transport Safety Board (TSB) found that “many passengers took their carry-on baggage with them during the emergency evacuation of the aircraft, despite the fact that [flight attendants] repeatedly provided specific instructions to the contrary.

In fact, almost half of the 300 passengers took their bags with them.

The aircraft, an Air France Airbus A340-300 with 309 occupants was evacuated safely before a fire took hold and destroyed the aircraft. The operative word here is before the fire took hold.

Here’s what you’re up against if faced with a cabin fire in a crash scenario:

In the event of a fire you have 90 seconds

As part of the certification of an aircraft, the manufacturer must demonstrate that all passengers can be evacuated in 90 seconds in an emergency.

Air crash research dating back to the 1960s determined an aircraft cabin engulfed in flames remained habitable for around two minutes. The FAA reduced this “safe time” to 90 seconds.

Take a look at the A320 cabin photo. Your cabin probably won’t look like this in an accident. There may be debris and obstacles strewn in the aisles, poor visibility, smoke or perhaps fire.

The cabin may be buckled or distorted. Some passengers will likely be dazed or confused. Or panicking. 90 seconds to evacuate 300+ bodies is not an awful lot of time in these conditions.

Survival rates are greatly improved when passengers understand the correct use of safety equipment and the actions they should take in the event of an emergency situation. ICAO states that well-informed, knowledgeable passengers have a better chance of surviving a life-threatening situation that may occur on board an aircraft.

The problem is really two-sided – operational crew must ensure passengers are given clear, appropriate information, but equally, passengers must comprehend the information provided.

Awareness is really the key and there are a few simple things to be conscious of next time you fly, even if you’re a frequent flyer.

So…how would YOU fare in the event of an incident on take-off or landing?