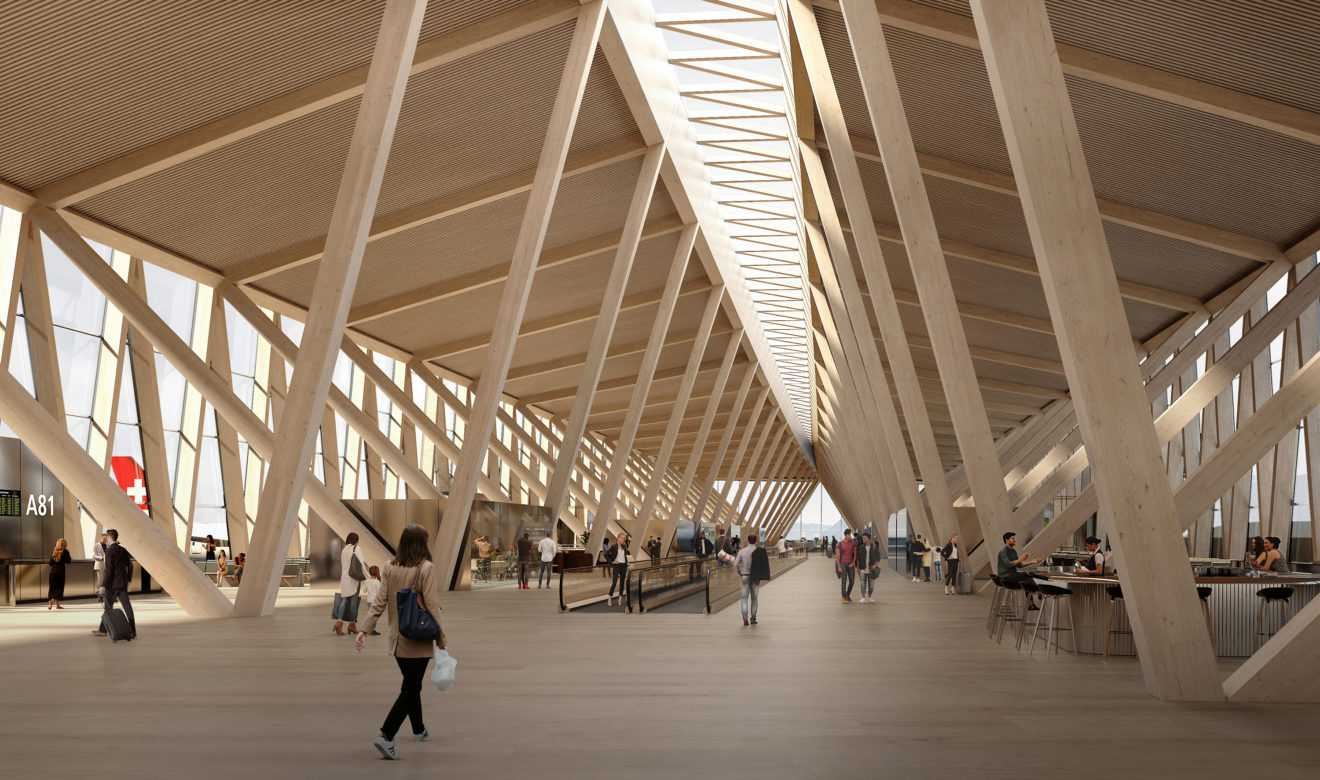 LONDON – Zurich Airport intends to build a new airport terminal, which will be constructed mainly using wood. The winning design ‘Raumfachwerk’ by the planning team consisting of BIG, HOK and 10:8 Architekten will be built largely in wood and will set new standards for sustainable terminal buildings. The new-old Terminal A including the air traffic control tower will be built over the next 10 years.

Construction of the new Dock A is set to start in 2030. The cost of the investment, in the new tower and terminal building, will be around 700 million Swiss francs.

Zurich Airport has been connecting Switzerland with the world for almost 75 years. As the requirements for flight operations are constantly changing and airport buildings reach the end of their useful lives, they also have to be continuously refurbished, expanded or replaced.

For example, Terminal 2 underwent extensive refurbishments until 2015, and the baggage sorting system has now been renewed and expanded. After over 35 years in operation, Dock A has now reached the end of its life cycle and has to be replaced.

Similar projects for the use of wood in terminal construction have been used in terminal expansions at Oslo-Gardermoen Airport and Cebu in the Philippines.

The Philippine airport was the first in Asia to start looking at sustainability and for this reason the terminal roof was created from wood. The Swiss project is pioneering, however, as the entire terminal building will be constructed using the noble material.

The eleven-member jury from various disciplines, chaired by architect Harry Gugger from Basel, was most impressed by the ‘Raumfachwerk’ design – one of ten visualisations submitted. Zurich Airport will build the world’s largest airport terminal, which will be constructed mainly of wood.

“The ‘Raumfachwerk’ design was the most impressive, particularly in terms of environmental sustainability, operations and economic aspects, as well as in terms of urban planning and architecture,” said Andreas Schmid, CEO of Zurich Airport.

The “Raumfachwerk” winning team with renowned architect Bjarke Ingels as the lead, is a cooperation between a number of firms. In addition to his architects’ firm BIG, based in Copenhagen/New York, these include the firm HOK based in the USA, which specialises in airport buildings and has already completed many projects, mainly at large airports around the world.

Another is the Zurich-based architects’ firm 10:8, which was responsible for the renovation of Oerlikon station, for example. The international engineering and consultancy firm Buro Happold has extensive experience in airport construction and is also part of the team.

With Pirmin Jung, a Swiss engineering firm specialising in wood construction, the team will receive key support in terms of the wooden structure and regional production.

The new Terminal A will be constructed largely from recycled as well as locally sourced wood – a unique concept for a terminal of this size. Photovoltaic panels will be distributed over the entire roof area of the new terminal and its base, covering around two-thirds of the terminal’s annual electricity needs.

The new building will therefore make a significant contribution to the ambitious carbon reduction strategy set by Zurich Airport management.

Wooden Terminal A will provide passengers with an enhanced experience, a better view of the apron, thanks to the large windows, and spacious waiting areas at the gates. The retail and culinary offering in the new dock base will also be expanded. The short routes, currently appreciated by passengers at Zurich Airport, will be retained and will be significantly more attractive, thanks to the new spaces.