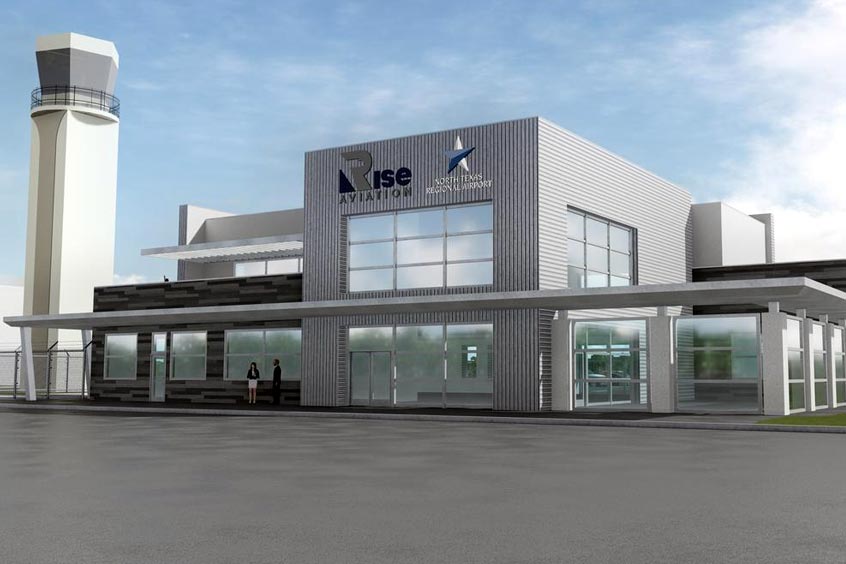 LONDON – Rise Aviation, a prominent aerospace company with its main business in providing FBO services across the USA has opened a new facility at North Texas Regional Airport (NTRA) in Sherman/Denison, Texas (KGYI). Flights began operating out of its new FBO terminal on August 1, 2022.

Building an FBO for the future

This latest FBO facility costs a multimillion-dollar facility, which is one of the first of the three construction phases of its FBOs, located at the eastern part of North Texas Regional Airport’s 9,000 main runway (17-35R), mid-field which is parallel to the 25 acres of the concrete ramp area.

The new facility (Fixed-Based Operator) will truly enhance the experiences of passengers using the facility, and will be greeted with comfortable lounge chairs, seating zones for relaxation and work, and will be pampered with food and drinks.

In fact, in early 2019, Rise Aviation renamed Lake Texoma Jet Center, which also provided FBO services at North Texas Regional Airport since 2007. With growing demand and the popular usage of private jets in the USA, a new FBO terminal has been planned to be built as early as 2017.

General manager at rising Aviation Mike Livezey, said with excitement: , “This new FBO terminal has been needed for a long time. With the growth in the DFW Metroplex continuing to move rapidly north toward Grayson County, many business owners or investors considering expanding, relocating or starting a new venture in Grayson County will arrive at North Texas Regional Airport in a business aircraft.”

“Rise Aviation’s new FBO terminal will be an attractive and welcoming ‘Front Door,’ and customers’ first visual cue Grayson County’s elected and business leaders are proactive with planning, investing and building the infrastructure necessary to accommodate any growth they are considering.”

The FBO itself comprises a 10,720-square-foot terminal that showcases an impressive passenger lobby,  a conference room which seats 12 individuals with audio and video conference capability, a pilot lounge, a pilot quiet room, flight planning area, and all of these rooms are decorated with arts featuring the wild west and the generic Texan landscape.

In addition, the facility itself also houses eight office suites for rental to flight departments and other businesses related to aviation, which in total is worth 1,750 square feet of space.

“This new FBO terminal enhances the status and stature of North Texas Regional Airport, and allows us to attract additional activity and users to Grayson County.”

In addition to the FBO, Rise Aviation already has a strong presence at this airport, where its got an office with 32,400 square feet and 67,000 square feet of hangar space, which is large enough to store the latest and biggest business jet in the ultra-long range category.