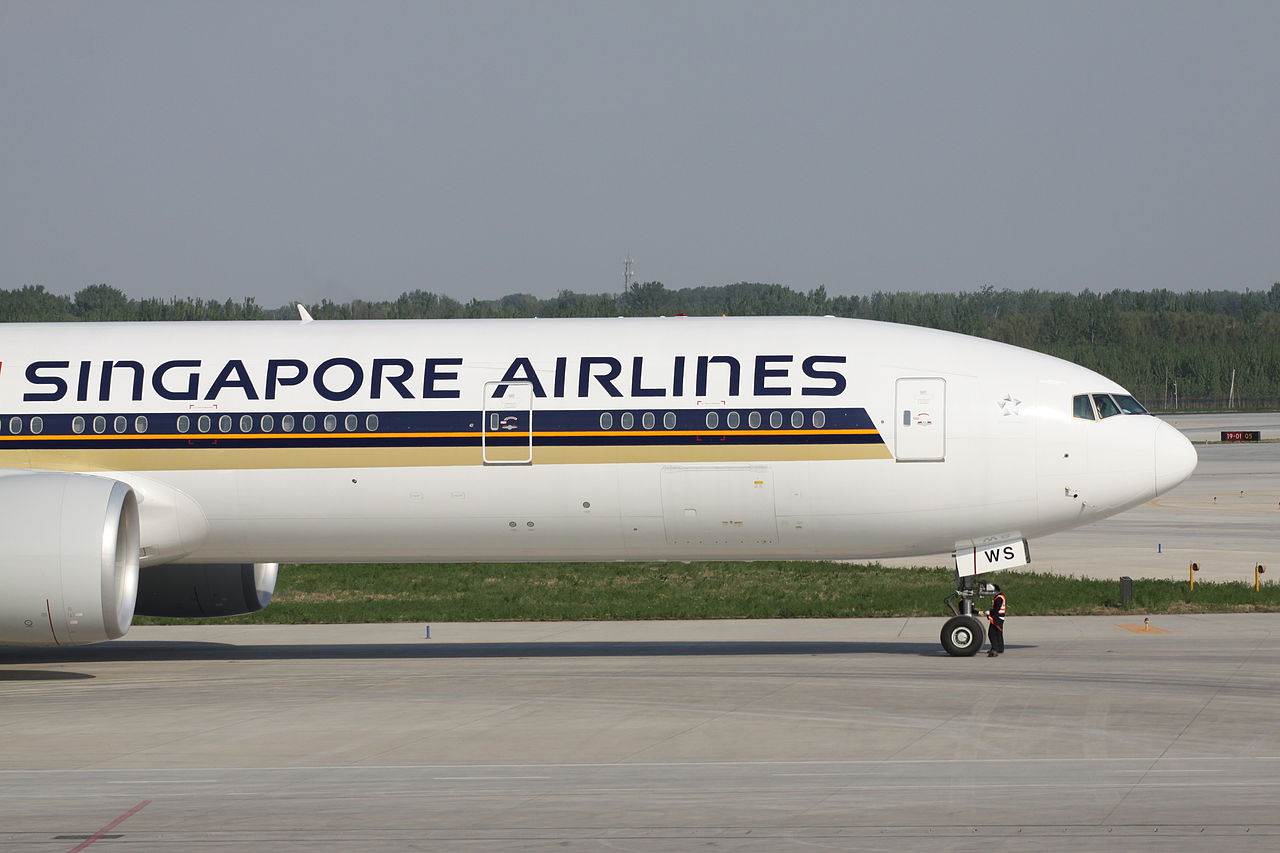 BERLIN – With the recent reopening of the US Border and the reintroduction of Singapore Airlines Fifth Freedom flight from Frankfurt to New York City, I decided that this year’s Christmas trip will be happening on Singapore Airlines.

Singapore Airlines flies once a day from Singapore to Frankfurt and on to New York.

This Extended Range version of the 777 offers a total of 264 seats across a four-class layout. 4 in First Class, 48 in Business Class, 28 in Premium Economy, and 184 seats in standard Economy.

Frankfurt Airport has a quite confusing infrastructure. I regularly fly out of Frankfurt and the parking system is more than confusing.

The Check-In Hall in Frankfurt is on one floor and easily accessible from the parking area and the train station. Upon entering the airport masks were mandatory, as anywhere in Germany.

The ground staff from Frankfurt Airport enforced this at any time, with people being denied entry into the airport without masks.

Check-in at Frankfurt was straightforward. The signage is clear and easy to understand. The Singapore Airlines Check-in was in Terminal 1, a little further than expected, on the other end of the Terminal.

I found the ground staff from Singapore Airlines to be very productive and fast but still with the typical Singapore friendliness. Premium Economy has a separate Check-in and we checked our bags in within no time.

I also confirmed my preordered meals with the gate agent, just to make sure everything will work as planned.

Security and Terminal at Frankfurt

Security Control and passport control were quite fast. Since this is the only flight to the US that leaves this early, the international concourse was rather empty.

The departure area wasn’t anything special, there were a couple of Stores, a Lufthansa Senator/Business Lounge, and the Air Canada Maple Leaf Lounge. Since I flew Premium Economy and my Star Alliance Status just recently ran out, I had no access to a Lounge.

That didn’t matter in the end, since boarding started around an hour prior to departure, and with that, we sat in the plane way before it was time to depart.

Since we flew Premium Economy we were asked to board prior to Economy passengers. We boarded together with Business Class Passengers what turned out to be rather chaotic.

I soon made my way to my seat for this flight, 32A, which is a standard Premium Economy seat with 2 Windows. At the seat, there was a pillow and a blanket waiting for me, which were both of high quality.

The Premium Economy Cabin is arranged in 2-4-2 seating which I found to be quite good.

Singapore Airlines Premium Economy seats are quite similar throughout their whole fleet, so there was nothing special about that seat. Apart from the Blanket and the Pillow, there was nothing else at the seat.

I missed an amenity kit and a water bottle. Both things are usually supposed to be offered proactively by Singapore Airlines. I didn’t receive any of the above during the flight until I asked for them about 4 hours into the flight, but more on that later.

The Seat also featured SQ’s awesome IFE, which offered a great variety of movies, tv shows, and music. The seat also offered a coat hook and enough storage for a small backpack and a Laptop.

It had 2 USB Ports and an Aux Plug for the IFE. One thing worth mentioning is that SQ offers Noise Cancelling Headphones in Premium Economy, which definitely did their job.

The seat itself offered a normal amount of Legroom and had a great recline. It also had a footrest, which I wasn’t able to use. I think they made it for dwarfs. Overall the hard product didn’t disappoint just yet.

After Takeoff and Climb out the meal service immediately started. Oh no that’s a lie. First time I saw the crew in the cabin was about 1 hour after we took off. The Purser came around to check preordered meals with passengers.

Don’t they usually do that before takeoff? Well, I guess not in Singapore. I confirmed my preordered meal with the purser, Hainanese Style Pork Neck with Rice and vegetables in a Sweet Sour Sauce, with potato salad as starter and ice cream as dessert.

You should remember that he confirmed this meal order with me, which will be important for the following. I also confirmed my preordered snack prior to landing.

A Fruit platter, which I ordered knowing that the snack wouldn’t be good at all, thanks to a friend who flew this route a week before me. The Purser then came around and handed out the preordered meals.

I was a little (just a little) disappointed about a complete mix-up of my preordered meal. In fact, I didn’t receive anything of what I preordered.

Instead of the Pork, I ordered I received a fruit platter (remember, I checked my meals with the gate agents). The crew already disappeared while I was trying out how to nicely show them my massive disappointment.

I then pressed the call button and a Flight attendant arrived within a handful of seconds. Well, at least that works. I tried to explain my issue to the FA but she didn’t seem to understand my issue.

He agreed that the FA made a mistake and understood my disappointment. I then received my meal, 30 minutes after the initial meal service started.

I received everything I preordered and was finally happy. Somewhere between all this, there was a quick drink service, I ordered a coke and a Gin Tonic, with the latter one being quite strong. After all that stress, I was quite happy about that though.

The starter was quite good, typical German potato salad as advertised. The Main was decent, the sauce paired with the rice and vegetables was great, while the pork was cooked well it wasn’t tasty at all.

The desert, vanilla ice cream, was great. Very soft, not rock hard like on other carriers. I liked that.

The Crew soon came around and collected all meal trays, I was hoping to get something to drink, but the crew already disappeared into the Galleys.

I then took a little nap and woke up due to heavy turbulences. After the fasten seatbelt sign was turned off I pressed the call button and asked for an amenity kit and a bottle of water.

Soon after the flight attendant came around and distributed water bottles. That was the only drink service until the meal service prior to landing.

On an 8 hour flight in a premium cabin, I expect way more than that.

Apparently, they also proactively offer snacks, which they even did on my 2-hour Business Class Flight from Copenhagen to Rome. Long story short, they didn’t offer any snacks. Neither in the Cabin nor in the galley.

2 hours prior to landing I received my fruit platter, seeing what the other passengers got, I was very happy that I preordered a meal. The fruit was fresh and tasty. Nothing disappointing here.

The crew offered then offered another round of drinks, I went for a coke and a Singapore Sling, which never disappoints and is a must-have on Singapore Airlines! We soon started our descent into New York and soon touched down on runway 31R.

After touchdown, we waited about 20 minutes on a taxiway for our gate to open up. Disembarkation was quite fast and I was happy to enter the US.

Immigration took roughly an hour, which felt quite long after such a tiring flight. We then grabbed our baggage and made our way to our hotel in downtown Manhattan.

All in all, the hard product of SQ is awesome. The ground experience was great and the seat as well. But that’s where it ends for me. I used to love Singapore and was a total fan of their hospitality but didn’t experience any of that on my flight.

The handling of mixed-up orders and the service just didn’t match their reputation. This was my worst experience with Singapore so far, but in the end, everything stands and falls with the crew.

My return flight in the economy was way better, the crew just made the difference. All in all, I’d say that the Singapore Airlines Premium Economy isn’t worth it.

The own Armrest and more Legroom may be nice, but it’s not worth the price, since the difference of the service to economy is just barely existing.