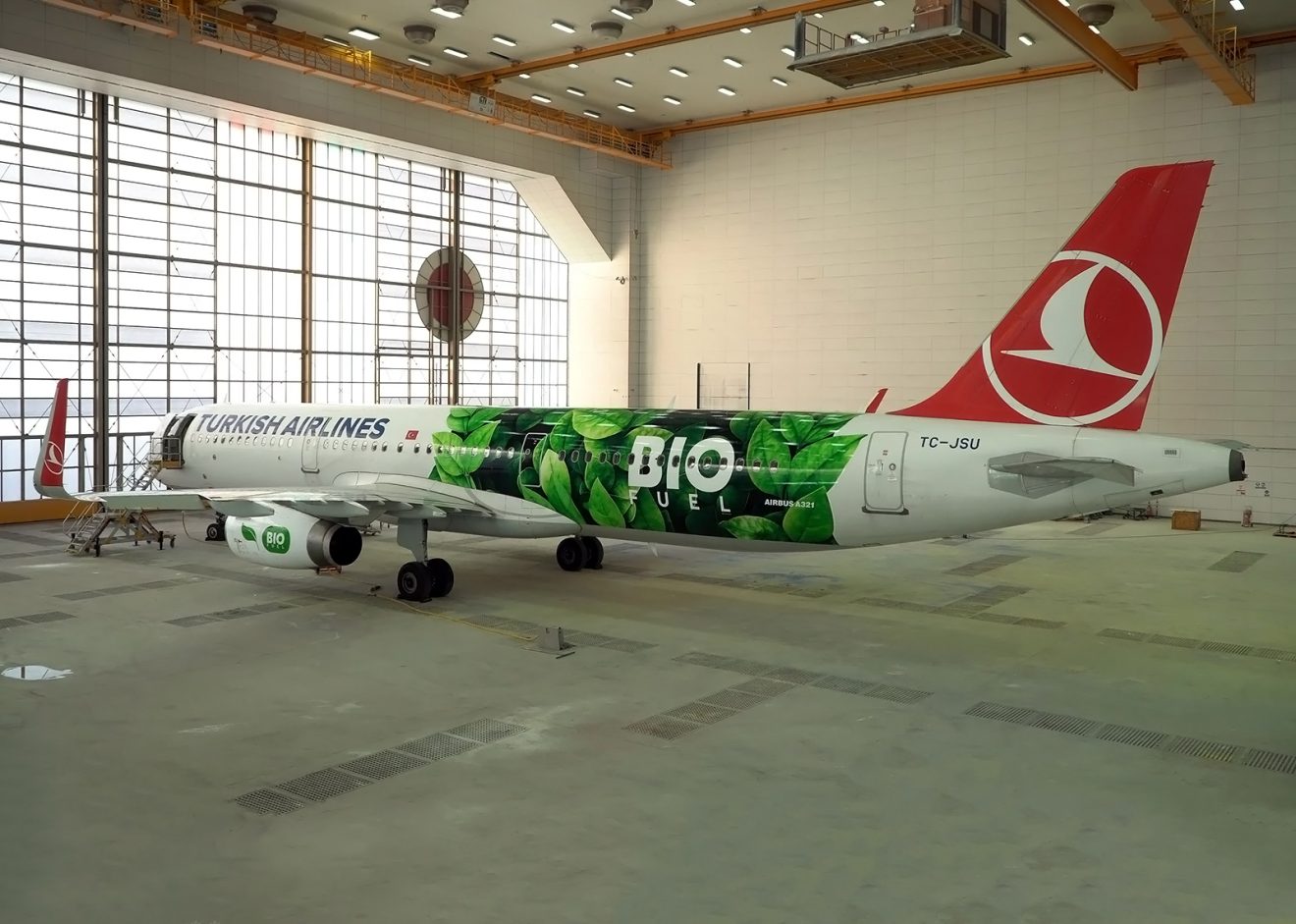 LONDON – Turkish Airlines, has revealed a special livery adorned with leaves on its Airbus A321 reg. TC-JSU which was used on its environmentalist fuel operation. Turkish operated its first flight with the new themed aircraft to Stockholm with TK1795 flight on April 27. The flight used biofuel, using a zero waste principle.

Alongside providing information on the sustainability actions with the Green Class concept of this flight, Turkish also took new environmentally conscious actions for this flight. While kraft tissues, paper cups, wooden salt and pepper shakers were used on the flight, all passengers were served complimentary healthy green tea. Another special measure was the nature-friendly pillow covers and blankets which were produced with 100 percent recycled certificated threads in order to save on water. FSC certified wooden toys were gifted for our child guests.

“As the national flag carrier of our country, our aircraft with its new design is now in the skies to underline the importance of sustainability for us. With the biofuel expression on our aircraft, we wish to emphasize the significance of using sustainable aviation fuel as it is one of the biggest hurdles of aviation industry’s struggle against carbon emissions. Thus, we are supporting the biofuel manufacturing efforts and aim to increase our flights which use biofuel during their operations” stated Prof. Dr. Ahmet Bolat, Turkish Airlines Chairman of the Board and the Executive Committee.

Turkish will continue its efforts to lower its carbon emissions with new generation aircraft added to its already young fleet, which has an 8.5 year average age. They’re planning to add new routes using biofuel on top of Stockholm. These include Oslo, Gothenburg, Copenhagen, Paris and London.

Biggest returns for the environmentalist operations of Turkish Airlines comes from fuel saving efforts. By productively adapting processes such as single engine taxi methods, route optimisations and flight center of gravity during planning to operations, Turkish saved 37,820 tons of fuel and prevented 116,809 tons of carbon emissions from being released to atmosphere during 2021. This equals to 292 thousand trees being planted or 473 flights between Istanbul and New York with wide body aircraft.

Operating with one of the world’s youngest fleets, Turkish aims to increase its fuel-saving by enhancing its fleet with new generation aircraft. According to planespotters.net, Turkish Airlines’ fleet consists of 318 aircraft. 79 of which (25%) are modern and fuel-efficient aircraft such as the Boeing B737 MAX, B787-9, Airbus A321neo and A350-900.

Turkish Technic promises a more environmentally conscious future with its renewed facilities. Turkish Technic’s C/D hangar, Turkiye’s biggest aircraft maintenance facility, stores rainwater and turns it into usable water. This water is stored and treated using a rainwater collection system. It is then used throughout the facility, rather than using water from the city’s water supplies. During 2021, 54 percent of the facility’s water usage was met with rainwater.

Company’s environmentalist actions are not limited to this either. Working with zero waste goal on all of its work processes, ground services operator prevented 2152 tons of hazardous and 294 tons of non-hazardous waste from being mixed with nature during 2021 just on the airports in Istanbul.

Ukraine Crisis: The Return of the Yak-40 and Yak-42 for UTAir?
Qantas Unveils Blockbuster Order for Over 100 Airbus Aircraft: Project Sunrise is On…
Comment