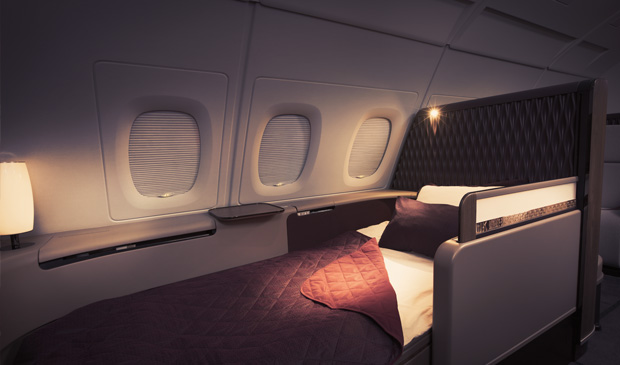 LONDON – Even before COVID-19, airlines have been in the slow process of strengthening up their Business Class products, much to the disadvantage of the prestigious First Class.

We are at a point that some airlines are utilizing their strong Business Class products as a First Class product, as we have seen with the emergence of Qatar Airways’ Q-Suite over the last few years.

As we begin to come out of the pandemic, VFR (Visiting friends and relatives) and Business is slowly restoring to recovery levels (Harper, 2021), and with lower consumer spending set to be the theme, can First Class still retain its position at the front of the plane?

As everyone in the industry will know, there have been airlines that produce or have produced fantastic First Class products such as Etihad Airways, British Airways, Emirates, and others.

But what they offer in the likes of Business Class is definitely close, or in some cases, better than their own First Class offerings. Below is some examples of this, particularly on the Transatlantic market:

With that in mind, the airlines will somewhat have to justify the use of First Class and whether the same clientele will keep paying over the odds for that when they know they can acquire a better service in a somewhat perceived lower tier for a cheaper cost.

As mentioned by aviation outlet Simple Flying, Qatar Airways’ HE Mr. Akbar al-Baker cited the use of his Q-Suite for theoretically and practically occupying the First Class space, despite what his competitors thought when it was released.

“Some of my competitors told me that it was a huge folly on my part to remove the first class from airplanes and just have this very high class first and business product that we call the Qsuite … and now they are following the same route. British Airways and others … have all two-class airplanes now.”

Is There Still Life in a True First-Class Product?

In that same article, and using Qatar Airways as the case study in this, al-Baker also accepted that there is demand for First Class flying and that the residents of Qatar are calling for it, meaning it could make a resurgence.

“Yes, there could be a possibility that only on two or three sectors from Doha, that is frequented by my countrymen, that we may introduce a very small first class.”

Again, with al-Baker currently in the process of implementing the second stage of Q-Suite, this may not be needed and could in turn satisfy the need of those asking for a return of the premium product.

Life does seem to be dwindling in First Class, especially on the front of the number. An article produced by the Financial Times cited information from OAG that in 2019, there were 8.46 million First Class seats on offer, which represented a 45% decline since 2010, whereas Business Class seats increased 42% to 184.48 million (Skinner, 2021).

As stated in the interview of the Financial Times article, OAG’s John Grant believes that airlines were already getting rid of First Class because aircraft are getting too small to accommodate it.

The likes of Emirates can continue to have First Class suites because of their focus on the Airbus A380 and other larger planes that can accommodate this better. With other airlines such as Lufthansa looking at getting rid of the larger aircraft, there is considerable cause for why First Class would dwindle.

With that in mind, the Business Class products are now too strong and will outplay the First Class model, especially with the capacity dwindling down. This has been evidently seen through the following four airlines and the above statistic as well:

Because of this, airlines who still offer First Class have a difficult choice ahead of them as we progress through this decade.

Do they go all-in on First Class or do they pull out completely? With COVID-19 on a lot of the industry’s minds still, airlines are currently at an inflection point where they need to either double down or look at getting rid of First Class to focus on a more refined and perfect Business Class product.

The whole point of it is to provide a legendary and prestigious service that completely exceeds all expectations compared to what you would get in Business Class.

Even so, Business Class products are beginning to look more like lounges, offer more space than First Class in some instances, and more privacy, which if it can be acquired for cheap, then it is going to be a no-brainer.

The fact there are more Business Class seats on the market, and that number is constantly rising year-on-year, it means that there is a demand shift, and of course, the airlines will capitalize on that if it means repeat business despite selling for a cheaper fare to that of First.

Outcome of the Future…

It remains clear also that First Class isn’t just the one in much danger at the moment. Business Class is too.

From the emergence of JetBlue onto the Transatlantic market, to airlines such as French bee offering services to New York from $139 one way in around a week’s time, customers may opt to sacrifice comfort for affordability.

As we also know from pandemics and major events in the aviation industry, it takes a long time to recover from it.

Based on the points ascertained in this piece, as a personal prediction, we could very well see Business Class capacity reduce in the short-term as companies will be strapped for cash and already have been encouraging working from home.

And that is of course what will make carriers such as JetBlue, French bee and other low-cost carriers thrive, as their Economy products may be enough on the affordability perspective to take on both Business and First.

I have mentioned in plenty of pieces at AviationSource and at other media outlets that there is one big word in Aviation: Volatility.

This industry is such a volatile one. One little reaction can cause a chain and change the way that we see this industry.

As we come out of this pandemic, we can only hope that First Class doesn’t diminish to the point of non-existence, but if it wishes to be saved, then it needs to redefine the way it offers itself to consumers. And that change must come from the airlines.

Amazing thanks to @aviosAdventurer on Twitter for the inspiration surrounding this piece.