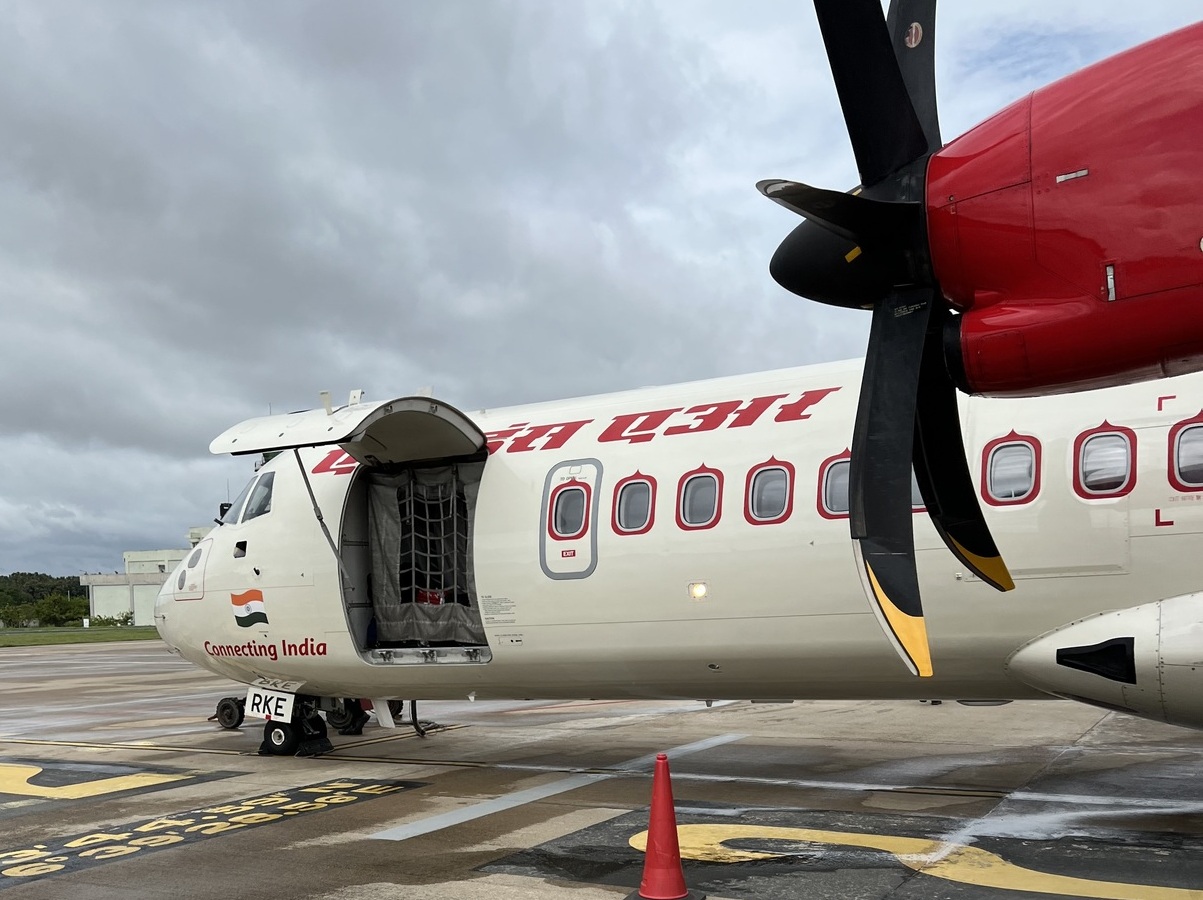 LONDON – In India, the aviation sector has almost returned to its pre-Covid level. With airlines launching new routes and discounted fares, people are now opting to fly more than ever. I have always wanted to fly in an ATR-42, but I mostly fly between “Metro cities” so never had the chance to fly one. After experiencing Indigo’s ATR, I decided to try Alliance Air on a flight from Bengaluru airport to regional Mysore.

Alliance Air has their website for check-in but there are many issues only will face when they try to Check-in, I had been assigned a seat which never existed in the seat map. I contacted their customer care who had no clue how this happened. Finally, after 25 minutes long call I was offered a complimentary seat of my choice, I decided to take 6A for a better view of the engine.

Bengaluru Airport has only one Terminal (T1), whereas another terminal building is under construction and is expected to open by October 2022. The existing terminal is one of the beautiful terminal buildings in the country, the airport has enough of check-in counters to make sure passengers have a hassle-free experience.

Alliance Air has only one counter at the airport, but during mornings they have 3 scheduled flights departing which makes the check-in experience little tedious, upon receiving my boarding card I noticed that it still has Air India brand (Those who are not aware Air India and Alliance Air were both government of India owned but now with Air India sold to Private player Alliance Air still remains a Govt. owned airline).

The security check area is big and has enough staff and counters for a smooth experience but still during any typical busy day it takes around 30 minutes. After waiting long for a tray, I put my bag and electronic items on the belt. It took me 32 minutes precisely to complete my security check and enter the airside.

As our aircraft was a small one (i.e ATR-72) we had remote boarding, I reached my boarding gate at least 1.15hrs before and to my surprise they had already started the boarding. I thought we would depart way before time but after boarding the bus I realised that as we have less pax on todays flight, this bus would wait at the gate until the last passenger boards the bus.

We waited almost 35 minutes in the bus itself. Once all the passengers boarded the bus it took around 15 minutes to reach the remote bay where my flight for the day was parked.

The seats looked really good, it had leather seat covers (first time I saw something like that in Domestic Indian Airlines). The seats did not have recline and the leg space was good for my size. Though I did notice the signs of the aircraft ageing and poor maintenance as well. Soon the doors were closed, and we started our taxi to the runway.

There is nothing to share about this as the crew never came to serve anything infact they did not even offer a bottle/glass of water to any passengers. Thought our flight time was 45 minutes I only saw the crew before landing when they came to make sure that all the window shades were open.

I somewhere felt the crew lacked that certain interest to serve the passengers as in one incident a passenger sitting behind me had his mask down and the cabin crew very rudely asked him wear his mask back on. She was so loud that every passenger turned to look at her.

We landed at Mysore Airport on time, as this being a regional airport one has to walk till the terminal building, Mysore airport is also one of my favourite regional airport as the terminal building is really clean and has all the basic amenities as well. Though this airport lacks public transport facilities and the only service available to reach the city is a private cab aggregator who will charge exorbitant prices.

Alliance Air needs to improve a lot, from its staff to its product all needs to be improved, having flown Indigo’s similar product there is a lot for Alliance Air to learn from them. I was left disappointed and probably will not try them again unless and until I can see some improvement in the company.

For more news on India aviation, please also see our article covering the doubling of India’s airline fleet numbers in the next 5 years.