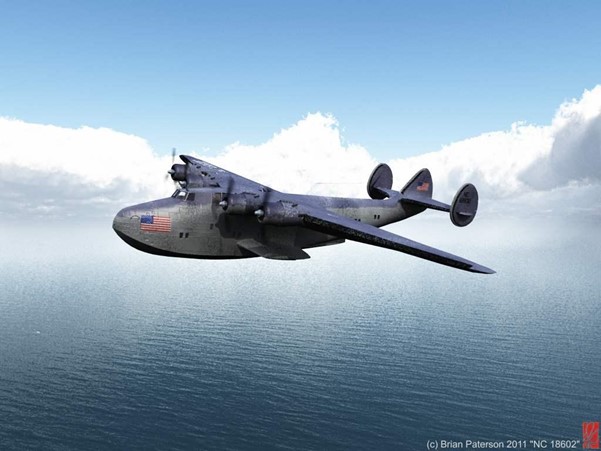 LONDON – On the breezy morning of 07th December 1941, Japanese forces launched full scale attack against US base in at Pearl Harbour triggering the beginning of second World War.

But the real story for today’s article interests all the passionate aviators and aviation enthusiasts, as we pay our humble tribute to Capt. Robert Ford and his crew of Pan Am flight NC18602 who brought back all his passengers and crew back home safe to United States, with an otherwise unusual route, crossing the globe, marking the first ever around-the-world commercial flight.

With inspiring article from Dave Kindy at Washington Post, we at Aviation Source have narrated this history for our readers and followers.

“A date which will never live in infamy” the famous expression used by US President Franklin D. Roosevelt, when Japanese Red Army unleashed full scale air raid on United States Naval Base at Perl Harbour on 7th December 1941, fuelling United States to join the Allied forces and thus breaking the Second World War.

But this event triggered something that would stand as undoubtedly adventures and first ever around the world commercial flight of Pan Am Pacific clipper NC18602 flight with 12 crew onboard to take unusual route back to San Francisco rather than its scheduled flight plan.

Pan Am, during this time was predominantly flying their iconic “Pacific Clipper” or commonly known as “Seaplane on Steroids”, was the Boeing 314, one of the largest aircraft of its era.

The 314 had a wingspan of over 152 feet, equipped with four 1600 Horsepower Wright Cyclone engines weighing up to 84,000 lbs with passengers and onboard fuel. Pan Am was the pioneer to use flying boats in late 1930’s due to lack of airfields and its unusual destinations around its network.

The service offered during this exotic flight has always been regarded as “glamorous luxury” by many aviation historians. The gourmet meals were cooked onboard galleys and served in dining rooms.

The aircraft was equipped with separate sleeping quarters with turndown bed services for its 74 passengers, making it a truly ocean liner in the sky.

Certainly, this did luxury did come with a heavy price tag, costing as much as USD 760 to fly one way from San Francisco to Hong Kong, which equivalents to todays USD16,000.

Air transportation writer Dr. F. Robert van der Linden says “There were nearly as many crew members on these flights as passengers to ensure comfort and safety”

On December 1st, 1941, Flight NC18602, in command of experienced Capt. Robert Ford, the Master of Ocean was flying with fellow crew members and 12 passengers from San Francisco to Auckland on its routine flight.

This was the flight where Capt. Ford was to be tested on his skills while the route was full of obstacles, both natural and man-made to its extreme.

After leaving Honolulu on its way to Canton Island, a scheduled refuelling stop around 2000 miles south of Hawaii, the plane started approaching Auckland on 7th December 1941, when the sudden announcement by the local radio channel aired “Pearl Harbour has been attacked by the Japanese Red Army.”

As Capt. Ford was in receipt of “Top Secret” letter from the company HQ to be prepared for such event, even before leaving San Francisco stating, “Due to its state-of-the-art technology, in case if the war breaks out, the crew must deliver the Pacific Clipper to the American military, if not successful, the crew is to destroy the aircraft themselves, putting aircraft first before their own fate.” As per the instructions, Capt. Ford along with fellow crew members started preparations for their next challenge as soon as all passengers disembarked in Auckland. Which was to be called “flight to escape and survival”.

After a week in New Zealand, Capt. Ford received his order from the Pan Am HQ to fly Pacific Clipper along with its crew heading west, his new destination would now be New York City, which means he will be taking flight across most inhospitable areas of the world and high seas, with absolutely no support, fuel, or money from the Pan Am, and no navigational air or technology to smoothen the expedition.

With this order, Cpt. Ford took off from Auckland on 17th December 1941, with overloaded supplies of gas, oil, spare parts, and sundries provisions heading towards Gladstone, Australia with borrowed USD500 from the local Pan Am ticketing office to cover rest of the journey and food supplies.

With the strict orders in “Top Secret” letter, it was the responsibility of Capt. Ford to protect the Pacific Clipper by all means form the enemy threats, the crew began stripping off all the markings and signs and codes from the body of aircraft to dodge Japanese patrol planes and presumably avoiding further conflicts while making their flight across the world to safely reach New York City.

But as the flight left Darwin in Australia and was approaching Java, an island in Indonesia, the stripped off signs started confusing Royal Netherlands East Indies Army Air Force, making Dutch fighters confused with aircraft being regarded as Enemy aircraft, when the radio officer could hear the conversation of fellow fighter pilots discussing whether to shoot down the clipper.

As ordered by Pan Am while leaving Auckland, Capt. Ford was maintaining complete radio silence, making sure there is no sudden change in its course of heading or correction and landed the clipper in the harbour just before avoiding explosive minefields, thanks to a small fishing boatman waving and alerting the crew.

With war broke out and short supplies of aviation fuel in Java, the crew decided to pump fuel from the nearby vehicles and boats to refuel reserve tanks, the bold move made by experienced Capt. Ford, when he decided to take off using ATF (Aviation Fuel) and the switching to the lower octane fuel obtained from the vehicles while in mid-flight.

With this hurdle overcome by Capt. Ford and Crew, the Clipper took-off west setting their course towards Ceylon, todays Sri Lanka.

As the horrific moments witnessed in Java, the crew was hoping for smooth landing in Ceylon, but that dream was vanished almost instantly.

As the crew was in its short final for landing, Capt. Ford discovered an enemy vessel about 300 feet below him.

As he saw the rushing crews on the vessel deck about to open fire at the clipper, he decided to pull up the aircraft, once again disappearing in thick clouds to avoid incoming fire.

On Christmas Eve 1941, after taking off from the Ceylon, as it reached the cruising altitude, the Clipper instantly faced an emergency when the piston on engine no. 3 was broken lose causing huge explosion and fire, forcing the aircraft to make an emergency landing back in Ceylon.

But the aircraft was ready to take off after necessary repairs and took it to the skies on 25th December 1941 heading towards Karachi, now Pakistan.

On 29th December 1941, while in flight over Mecca, in Arabian Peninsula on its way to Nile in Egypt, the aircraft was met with another set of surprises, when the aircraft was fired upon by the people in minarets at the Mosques, because the Clipper was intruding the No Fly Zone, the time when overflight ban was strictly imposed in Kingdom of Saudi Arabia.

With this set of experiences to his sleeves, Capt. Ford eventually decided to land the Clipper on Nile River near Khartoum, only to refuel and put it back in the air on its way to Congo River in West Africa on New Year’s Day 1942.

As the Clipper started approaching Leopoldville, todays Kinshasa in Democratic Republic of Congo (DCR), the more worries were added to the already stressed crew members, as the landing on Congo River required precise approach to the stream which is surrounded by the thick jungle leading into water.

But once again, Capt. Fords experience overcame this challenge by safely landing the Clipper only to be handed out a cold beer by the fellow Pan Am ground members stationed at a small outpost in DCR.

From here started the real challenge of Clipper to start Transatlantic crossing spanning over 3500 miles of flight route with open ocean after a brief stop at Banjul, Gambia.

After almost 20 hours of non-stop flying, the crew once again took off from Natal in Brazil to make a brief stop at Post of Spain in Caribbean.

And thus began the final leg of the Clipper Journey to its home in LaGuardia Airport in Ney York City, after clocking 209 hours in the air and crossing more than 31,500 miles around the world, the Clipper along with Capt. Ford and its Crew finally made a successful touchdown on 06th of January 1942.

Thus, making the first ever commercial aircraft to circumnavigate the earth with no advanced navigational aids, adverse conditions and with tremendous political turmoil’s erupting across various parts of the earth. This record of the longest commercial flight by mileage still stands today by the Pacific Clipper.

Dr. F. Robert van der Linden said, “It happened at a time when both oceans had been crossed before, And it was not the first around-the world flight. Several pilots had done it before. But those were all planned missions / trips with maps and coordinates worked out in advance. What you have here is a commercial airliner with a commercial airline crew doing this completely unplanned journey while under threat of being shot down.”

Dr. F. Robert van der Linden further applauded by saying, “Flying around the world with no charts is astounding, they didn’t get lost, and they had only one engine problem, which hey fixed. These planes were beautiful, but they were hard to fly.”

With this courageous attempt made by Capt. Ford and his crew to bring back the aircraft along with themselves home safely and in those adverse conditions is worth appreciation.