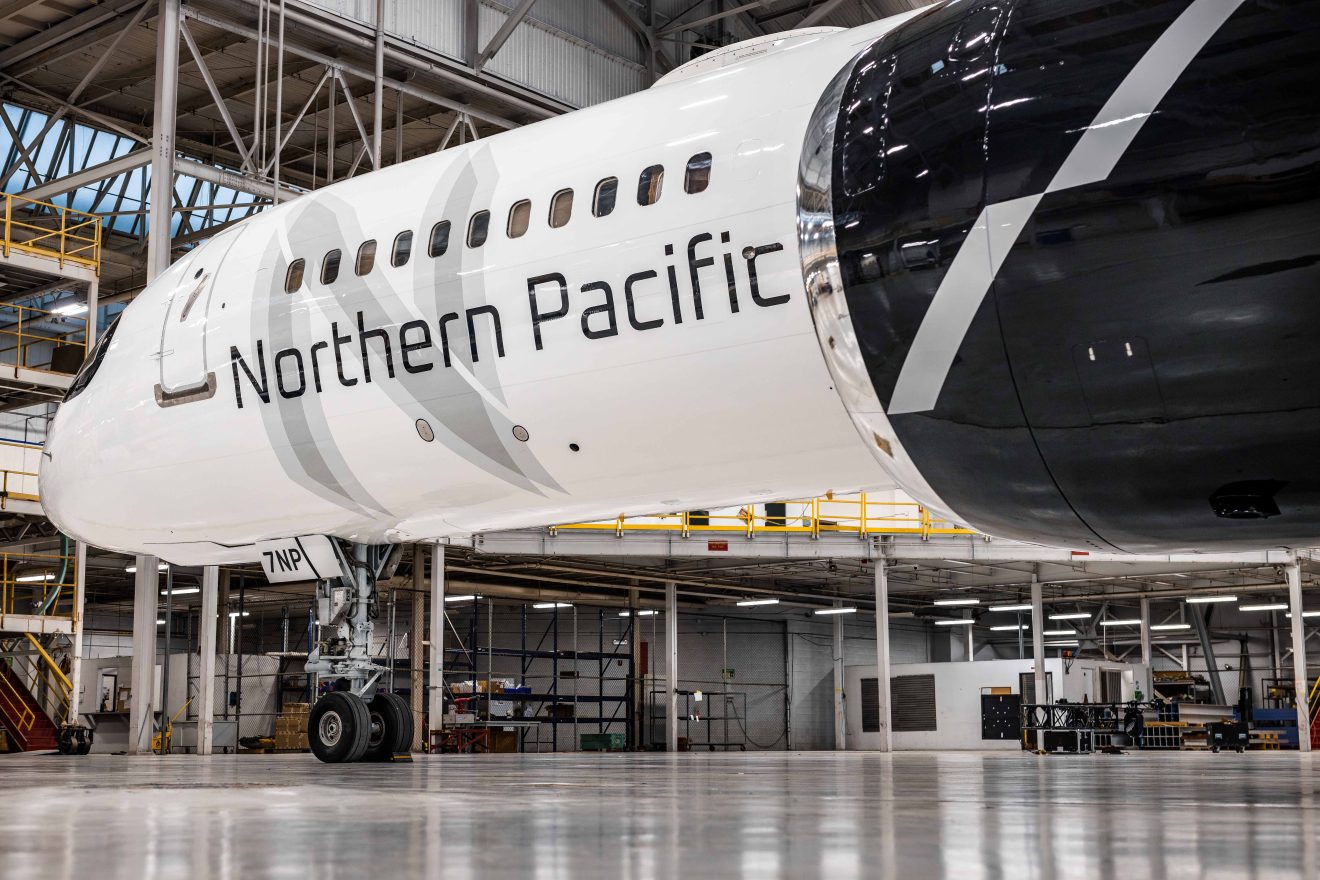 SAN BERNARDINO & LONDON – Northern Pacific has revealed its livery to members of the press at an event held at San Bernardino Airport, California. The Boeing 757 aircraft is the first of six that the airline has bought for its startup operation.

The airline is initially using Boeing 757 aircraft. They’ve acquired six former American Airlines airframes, with plans to acquire another six prior to launch.

These aircraft will have MRO support courtesy of Certified Aviation Services (CAS).

Northern Pacific plans to use Anchorage as its main hub. Their flight model is similar to Icelandair, in that passengers would fly from somewhere in the USA to Anchorage, and connect onto a flight to Asia.

It is also hoped that passengers would stay for a few days in Alaska on their stopover, using Ravn Alaska’s route network to explore the region.

The airline has said they hope to have quick connection times at Anchorage. This is to cater to those who do not wish to stop in Alaska. Anchorage’s North Terminal will receive an Alaska-themed renovation.

The idea of this is for Northern Pacific passengers who aren’t leaving the terminal to feel that they’ve still visited Alaska.

Their initial route network is expected to include Tokyo, Japan, and Seoul, South Korea in Asia. For the USA, alongside Anchorage, the airline hopes to serve Los Angeles, San Francisco, New York, Las Vegas, and Orlando.

“The design echoes our airline’s values—elevated customer service, an esteemed point of view, and an innovative route strategy designed to connect passengers from east to west.”

During the ceremony, McKinney went into a lot of detail surrounding what the airline will be able to offer to its customers as well as operational information surrounding the carrier.

He expressed no shame, but more pride when he openly admitted they are copying the model Icelandair adopts when it comes to stopovers in Keflavik and are doing the same for Anchorage. McKinney went into more detail about this in our interview with him earlier today.

PepsiCo attended the event today as well. This is because they will provide food and drinks on board flights with Northern Pacific.

Whilst on its website it says a couple of destinations the airline would be looking to serve, McKinney confirmed no official routes have been finalized as of yet.

Slots and gates are available in airports which wouldn’t usually be interesting, but would of course give an opportunity to the carrier.

He believes that using the Icelandair model in Anchorage would work, especially with quick immigration, the tourist attractions around Alaska, and more.

McKinney mentioned also that the success of the business depends on how quickly they can launch, hence why they chose the Boeing 757 as they were readily available. He mentioned the 757 isn’t right for the future, but instead for right now.

The aircraft will be configured in a three-class setup being Economy, Economy Plus, and Premium. The airline has signed for six aircraft at the moment but is nearing nine commitments.

He is hoping for a 3Q22 launch and to offer a strong product when services do launch then. The IFE onboard will be that strong, including the WiFi, that you will be able to stream Netflix onboard.

In terms of the future, McKinney did not shy away from talking about future aircraft orders.

He mentioned that constructive conversations are being had with Airbus and Boeing, highlighting the point that when they do order, there will be no mixed manufacturer-based fleet. It will be one or the other.

McKinney also stated that he sees an opportunity for widebodies in the future, especially with his hopes of being able to expand into Europe and beyond. When they get to that stage, he hopes to utilize widebody cargo space as well.

The Northern Pacific CEO also set an aim of reaching a fleet of 50 aircraft within the next five to seven years and aims to be considerably cheaper than other airlines most of the time.

Finally, he plans to launch a loyalty program based on cryptocurrency, which would be a new approach to offering such a service but didn’t go into further detail about that at that time.

Rather than this being a focus more on the livery reveal, it branched out more to the revealing of its identity and what it aims to bring to the market.

The innovative design is thoughtfully curated to reflect the natural beauty of the Alaskan wilderness. Dramatic black hues and soft gray tones symbolize the state’s mountainous terrain, ice, and snow.

The livery’s design includes the “N” letterform that sits behind the Northern Pacific logotype. The windshield features a bold, black masking treatment that adds distinctive charm.

The aircraft’s winglets pop with a burst of sharp turquoise, accompanying the neutrals to represent the breathtaking Northern Lights.

Completing the overall impression, the tail hosts a vibrant and elegant line motif that twists with an organic flair, juxtaposed with the eye-catching jet-black tail.

It remains clear that the identity of the Northern Pacific will no doubt reflect on the potential successes it is to have in the future.

Utilizing Anchorage in an Icelandair-styled model will see a new change for the better in terms of tourism out of Alaska as well as enhanced flight connections onwards to Asia and beyond.

What we do know is that Northern Pacific has knocked this out of the park, and that sets the tone for the months ahead to the official launch.

Click here to see our interview with the CEO Rob McKinney!

Click here to see our live coverage of the event!