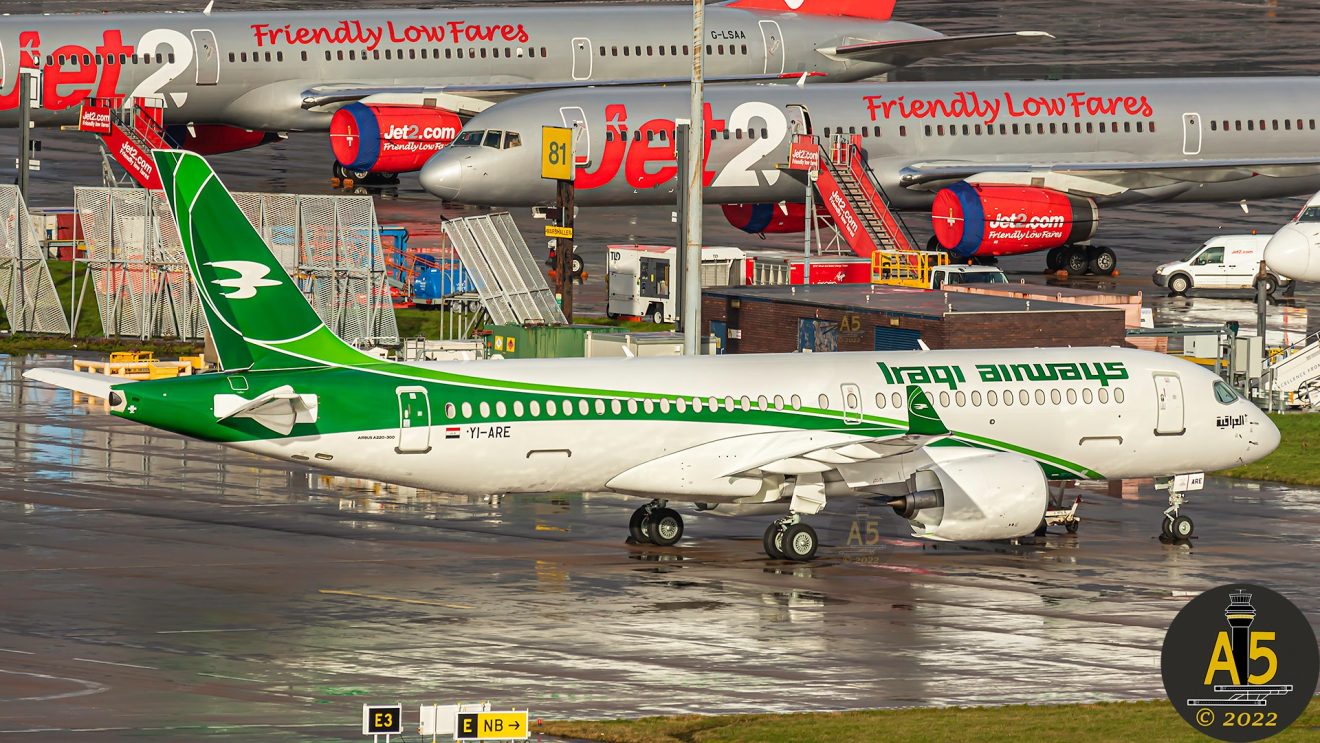 LONDON – Iraqi Airways is all set to welcome its first Airbus A220, as the aircraft left Montreal and is heading to Baghdad, it’s new home.

The aircraft has made a brief stop at Manchester International Airport in the UK for refueling heading onwards to Baghdad, Iraq.

This is the first of 5 Airbus A220 aircraft along with the upcoming Boeing B737 MAX and 787 Dreamliners the airline is expected to receive in coming years as a major fleet renewal program set by Iraq Airways.

The airline is all set to welcome its first A220 with pride and joy as Iraqi Airways will be the first operator of the refined Airbus A220 jet.

The first A220 is registered under YI-ARE and is given the glorious flight number IA2220, as it took off from Montreal last evening at 16:00 EST.

The A220 is all set to join the newly reincarnating Iraqi Airways, which proudly operates 32 aircraft, including A320 family, 737 families with a mix of short and medium-haul options, 2 B747 jets, and 1 B777-200 LR for its long-haul operations, with 6 CRJ900 operating as regional and domestic operators.

The fleet renewal program set out by the Iraqi Airways management will see the inclusion of 16 737 MAX 8 and 10 787-8 over the period of time.

The airline is turning its image of banned airlines to operate within since it was put on the list in 2020 on the grounds of safety concerns.

The delivery of Iraqi Airways A220 is a crucial milestone for the company, as the deal was first aggreged in 2014, while the aircraft was still under the Bombardier C-Series.

Later it was announced at Dubai Airshow, with a firm LoI that the company will be firming up for 5 CS300s with options for a further 11.

During this time, CEO and Director General of Iraqi Airways, Saad Al-Khafaji in his interview with ANI mentioned that “The airline is intended to use the type on service to secondary airports, including Basra and Najaf”.

Mr. Khafaji further quoted that, “In Baghdad, we use big aircraft, but in the other airports we will use aircraft that for us are normal size 150-seats or less.”

The new A220 will be configured with 12 First Class seats and 120 Economy seats. The airline has chosen IFEC as the supplier for Panasonic Avionics in November 2020.

The deal has been signed to provide inflight entertainment and WiFi not only for A220 but for all the new fleets scheduled to join. The Panasonic will add its X Series IFE solutions to the A220, 787, and 737 MAX, alongside eXW WiFi products.

We hope the new endeavors set out by the newly incarnated Iraqi Airways achieve its full potential and once again make its presence over the Middle Eastern markets.

With the new fleets joining the airline, we believe the EU will review the safety standards and practices of Iraqi Airways, allowing them once again to operate within the EU.